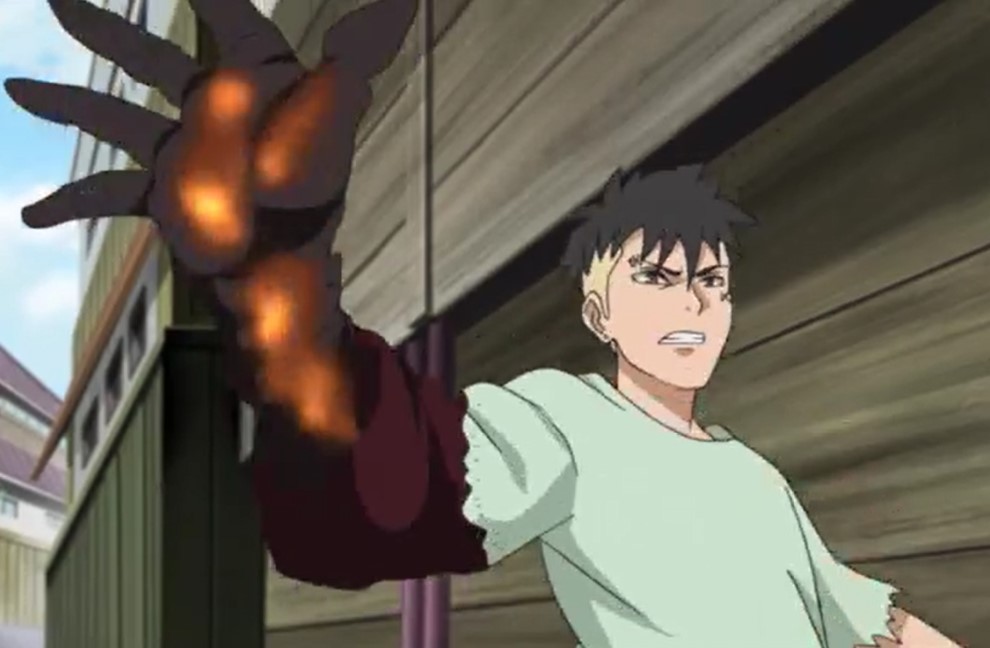 Kawaki has managed to run away from the lab after defeating Sumire. But his hand is bitten by Nue. He notices that he is hungry, and his arm is taking too long to regenerating fast enough. Sumire and Nue follow that trail of Kawaki’s blood. Kawaki thinks he is running away from Jigen and his allies. The guards reveal that the fugitive is an adolescent male. He is wearing green hospital robes and possibly injured. Boruto, Sarada, and Mitsuki heads out to find Kwaki.

Mitsuki reveals that the quickest way out of town is the Thunder Rail. Kawaki might have used that way to escape. Kawaki arrived at the nearby village and decided to steal some food. One of the villagers drops some food, and Kawaki wanted to steal it. But a start dog also wants that food. Kawaki told the dog that he has found the food first and he is supposed to eat it.

The story dog attacks Kawaki and his sending the dog flying with a single slap. But he notices that the dog’s leg is injured, and he covers it with a veil. He decided to give his food to the dog, and it calms down. Nue and Sumire have arrived at the village that Kawaki is in. They saw Kawaki’s blood and realize that he is still in the village. The stray dog started to like Kawaki, and it follows him everywhere.

Meanwhile, Mitsuki, Sarada, and Boruto are unable to locate Kawaki’s position. Sai and Naruto are inside the train heading to see Kawaki. They are not aware that Kawaki has escaped. Sai thinks it is too risky to allow the mysterious boy to enter the village.  Naruto told Sai not to worry about that. Sai reveals that the Kara is searching for Kawaki. 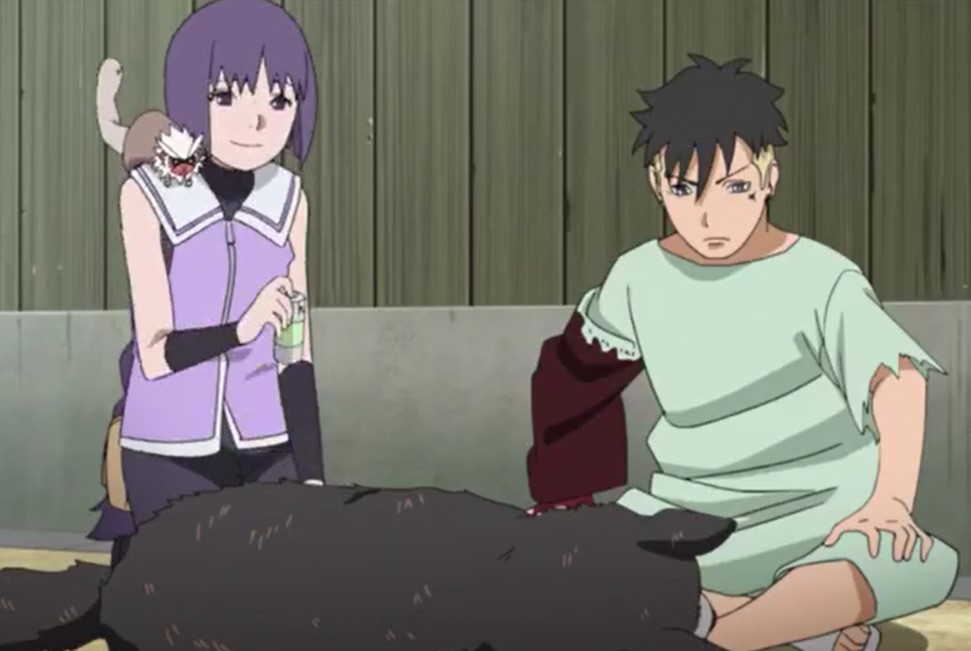 If they come here, the village will become a battlefield gain. The stray dog heads somewhere and steals the meat. The owner of the shop chased that dog, and Sumire saw that. Sumire notices the veil covering the dog’s leg and realizes it is the same as Kawaki. The stray dog arrived where Kawaki is. It tried to give him the meat, but the meat’s owner arrived. He knocks out the stray dog, and Sumire also arrives. She saw Kawaki trying to run away, and she realizes that what she suspected has become true.

Kawaki decided to save the start dog from being killed by the meat’s owner. He asks the guy what he wants to do with the dog. The guy replies that he is going to teach this filthy dog a lesson. Kawaki gets angry and unleashes his powers of Krama, and destroys the wall. He is warning the guy not to mess up with the stray dog. The guy comments that Kawaki is a monster, and he runs away.

Sumire saw how strong Kawaki is, and Kawaki asks him what she is looking at. Sumire comments that they must take care of the dog. They both help the dog together, and the dog recovers. Sumire told Kawaki the dog’s wound would heal soon. She apologizes for what Nue did to Kawaki’s arm earlier, but the arm is regenerating. The start dog wakes up, and Kwaki told it to go. Sumire told him that he must not treat the dog like that. Kawaki comments that nothing good will come out if the dog stays with him. 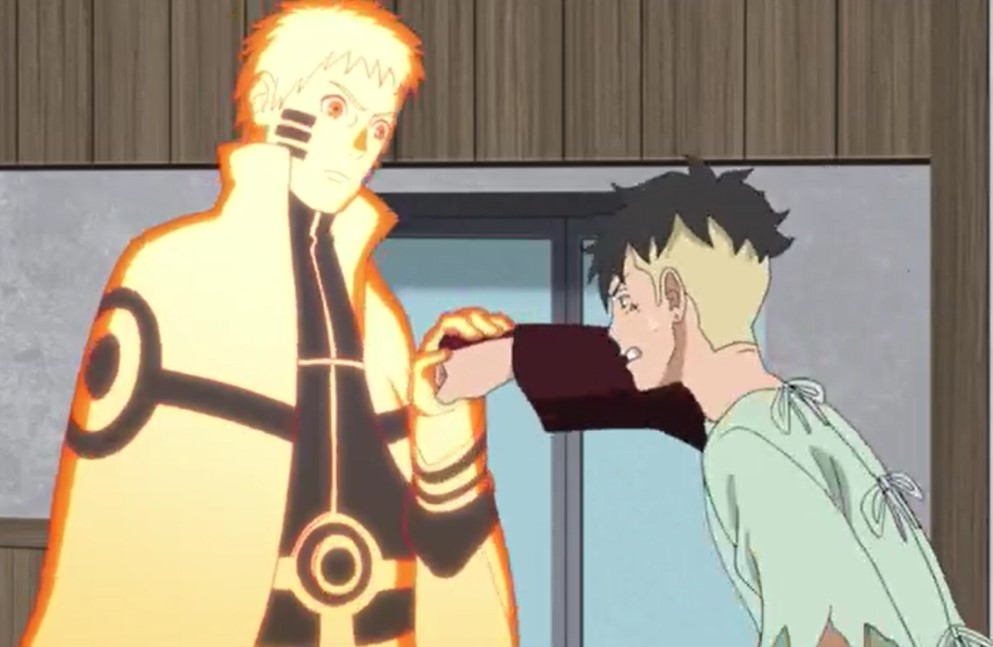 Sumere aks Kawaki to tell her about himself, and Kawaki said he is not going back. He reveals that he has powers that can wipe this village instantly. Sumire told Kawaki that Lord Hokage is on his way here to talk with him. Kawaki comments that Lord Hokage is interested in his body’s abilities. He thinks that Sumire is talking about Jigen instead of Naruto. Kawaki said he doesn’t trust kids or adults. Sumire comments that she knows how it feels to be unable to trust those around you.

Kawaki told Sumire to stop filing him by trying to act cool. Sumire reveals that her father implanted a weapon into her body to satisfy his warped sense of revenge. She was very close to destroy the Leaf Village. But Boruto and everyone brought her back onto the right path. Kawaki asks her why she is telling him this. Sumire replies that she had a feeling that Kawaki might have a painful past. Kawaki started to feel dizzy, and Sumire wanted to inject her supplements that will give him energy.

Kawaki thinks she wants to put him to sleep. He chokes her, and Boruto, Mitsuki, and Sarada arrive Boruto told Kawaki to leave Sumire. He battled with them and defeated them. Lord Seventh arrives, and Boruto explains everything. Naruto stoped the power blast using his power, and Kawaki comments that the boss has arrived. Naruto talks with Kawaki, and he falls asleep in Naruto’s hands. Everyone is glad that Lord Seventh has stopped Kawaki’s rampage.

Take a looks at how Kawaki escapes the lab on Boruto: Naruto Next Generations Episode 191. Don’t miss the past of Kawaki with Jigen next week.