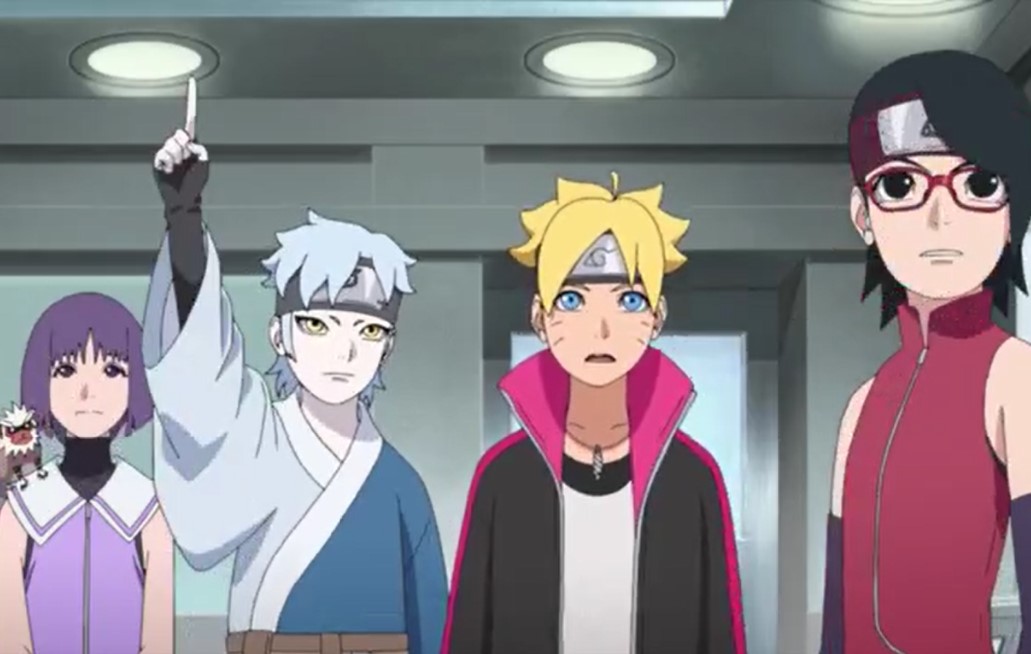 Team 7 has arrived at the Hidden Leaf Village, and Konohamaru reports everything to Lord Seven. He never thought that Mr. Ao was with the Kara. But Mr. Ao is the one who sacrificed his life for Boruto. Mugino has also sacrificed himself to protect all of them. Naruto comments that it was a painful mission. Sai comments that it is painful to lose a comrade. They will not just mourn for them, but they will make sure their death wasn’t in vain.

Konohamaru hand the intel to Shikamaru, who said he would hand it over to the Cipher Corps for analysis. Konomaru said the intel has data that they have collected from the container. They might find more clues about the Kara. He asks about the boy with that same mark that Boruto has. Konohamaru said that mark is called Karma, and they are having the boy examined at the lab in Ryutan. Shikamaru thinks that they cannot let someone that they don’t know to enter the village. Let’s see what the previous episode and other updates have to offer below.

Konohamuru reveals that the Kara is after the boy, and they call him the vessel. Konohamaru thinks that they are inviting trouble to themselves. Naruto comments that the boy is just a child. Konohamaru reveals that Kashin Koji killed Mr. Ao, but he is surprised that he used Rasengan. Shikamaru comments that there are only a few Shinobi who can use the Rasengan. Konohamaru thinks that Koji might have copied the Rasengan from a Scientific Ninja Tool. 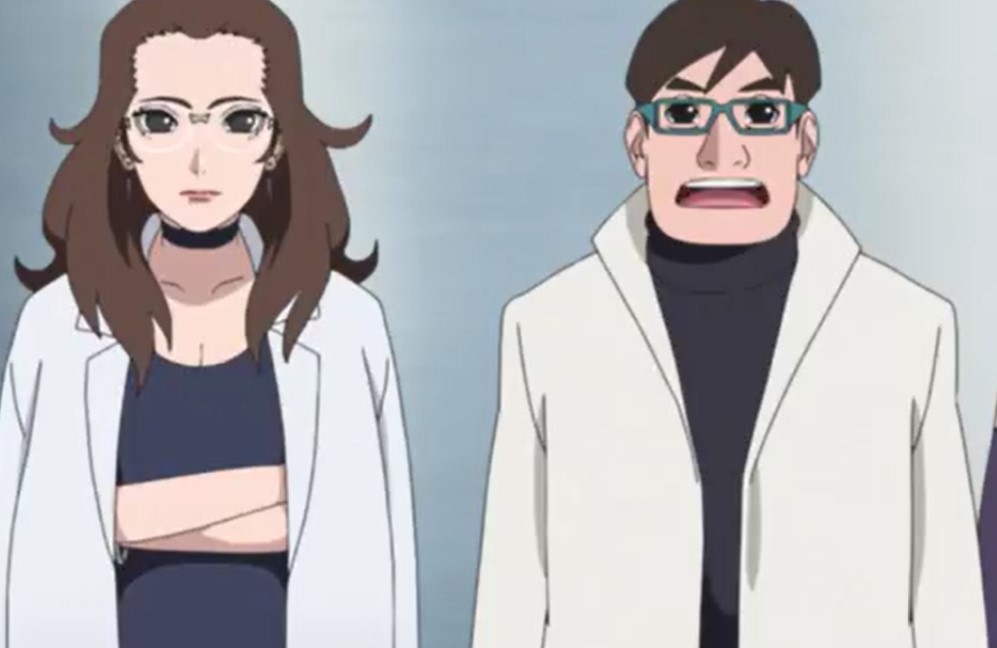 The boy is locked at the lab with Scientific Ninja Tool cuffing his hands. The doctor reveals that rapid cellular division is occurring inside that young man’s body. Because of that, he can strengthen or weaken his body during combat. Dr. Katasuke notices that the boy’s regeneration abilities are very high. Mitsuki is worried if the boy started to use the power of Karma again. Dr. Katasuke thinks that the boy has no enough chakra to transform his body or use his powers.

Boruto opens his hand, looking at the mark, and wonders why he has Karma. Dr. Katasuke told Boruto that they will continue their research since now they have no clues about Karma. Boruto is worried that the boy thinks they are his enemies and can’t let him loose. Katatsuke said it pains him to isolate the boy, but he has no choice. He told Team 7 to stay on guard and warns Sumire about the boy.

The boy side the lab started to destroy everything inside the room. But he cannot break the wall or the door. Dr. Katasuke receives the report about the emergency. They watched the footage, and Mitsuki suggests that they must stop the boy before he escapes. They opened a sleeping gas to restrain him inside his room. The boy is worried about why he can’t break anything thing since he used to destroy everything.

The boy falls unconscious, but he wants to get out of here way from Jigen. He thinks that Team 7 is working for Jigen and the Kara. In his dream, the boy saw Jigen calling him his son. He wakes up and finds himself on top of the bed. Sumire offers him food, but he kicks them away. He thinks that the food is poisoned, and Sumire notices that the boy is not falling at ease since he is confined. She told him that they mean no harm. 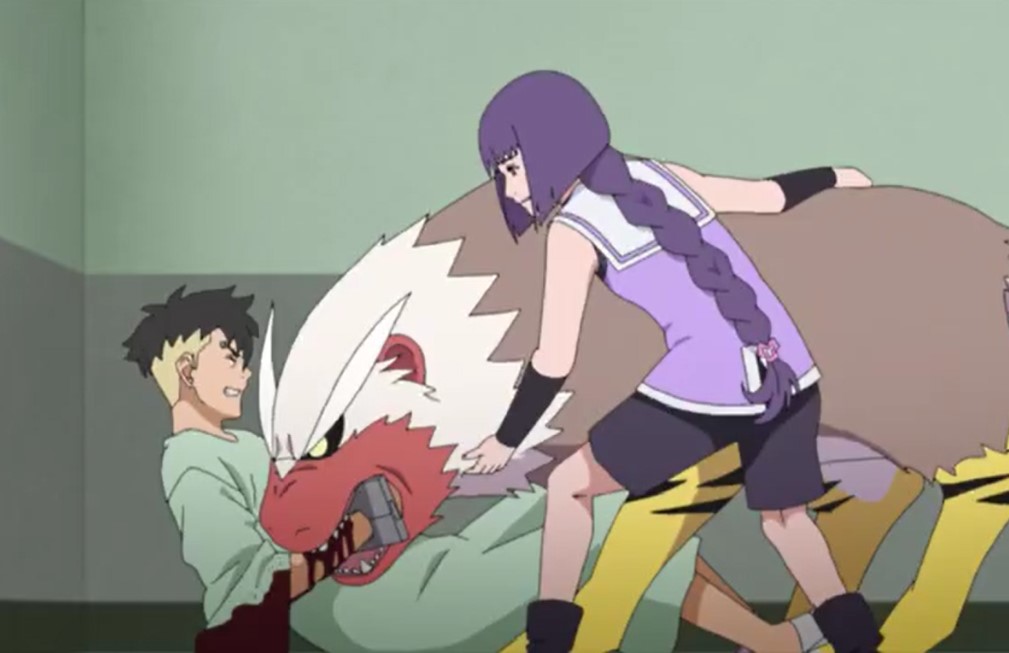 The boy is thinking about using the power of his Karma to escape. Sumire tries to console the boy. They left him alone, and Sarada scolds Boruto for being hard on the boy. He calls them to come back; he has a request, and Boruto is surprised that he just wanted to use the bathroom. Meanwhile, Naruto is on his way to meet with the boy. Inside the bathroom, the boy uses a smokescreen and escape. They report that the boy has escaped, using Scientific Ninja Tool that he stole.

Sumire met with the boy at the stair and said she wouldn’t let him escape until Lord Hokage arrive. The two exchange powerful blow. Sumire pins the boy with the floor, but he uses another Scientific Ninja Tool and bangs Sumire with the wall. Nue notices that Sumire has been taken down and transform into his monster form.

Nue bites the boy’s hand, but the cuffs on his hands got broken. His hand is bleeding, and he comments that Nue is a monster. But it is a dangerous monster than Nue. The boy manages to escape from Nue and Sumire, but he left the trail of his blood. Boruto is wondering where did that boy go to. Mitsuki suggests that he must have escaped to the forest. Outside the lab, the boy is looking for food to eat since he cannot regenerate quickly.

Boruto: Naruto Next Generations Episode 191 will release on Sunday, 21 March 2021, at 5:30 PM. You will be able to watch it online on Crunchyroll, AnimeLab, and Funimation.

Read Boruto: Naruto Next Generations Episode 190 to find how the two Karma emerges during the battle.