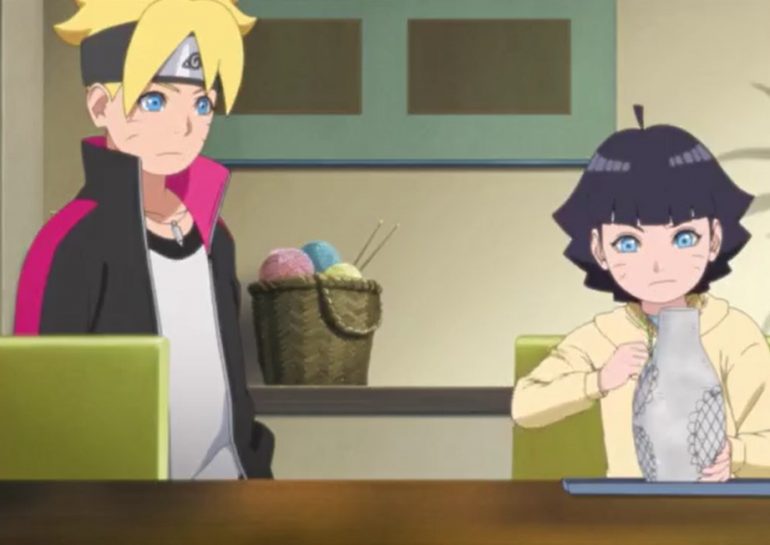 Boruto: Naruto Next Generations is taking a weekly break next week and returns on the date mentioned below. Let’s take a look at the recent updates here, Boruto disturbs Hima who is making a vase. After she has finished she asks him if her mom will like it. Boruto realizes that it is going to be his mom’s birthday Hinata. Hima decided that she will be giving her mom a vase as a birthday gift.

Boruto remembers that it is payday today, he will have to look for something after his mission. Later he visited Thunder Burger and meet with Team 7 talking about their mission. Mitsuki can’t believe that they are taking on missions without Konohamaru from tomorrow.

Boruto reveals that it is an urgent mission. Sarada decides that since Konohamaru is not around she is the team leader. Team 7 talk about the mission and left on his way Boruto saw a lady carrying a flower. He thinks it will be a good present for his mom and Mugino pass by at full speed.

Mugino shouts at everyone to clear the way for him which surprises Boruto what is happening. Boruto follows Mugino asking him what is happening and if he is chasing someone. Mugino reveals that he is on a top-secret mission and Boruto decided to help.

They both got cornered by two chefs on of them said that he is not letting Mugino off-hook today. The chef adds that Mugino has to pay back the entire tab he owes his restaurant. Mugino eats and drinks more than the average customer and leaves without paying. Boruto realizes that Mugino was being chased for a tab and Mugino said he will pay his tab on his next pay-day.

The chef said payday is today and he replies that he has a good memory. Mugino decided to pay and the chef took his wallet and find that there is only 1 coin. Mugino reveals that he has run into a kid who said he had a sick little sister. He felt bad for him and give him his entire pay for this month. Boruto asks who will believe such an obvious lie and the chef gets angry asking if he is still making ridiculous excuses even now.

Boruto tries to defend Mogino and the chef asks if he is his friend. Boruto agrees and he asks him to pay for Mugino’s tab and he lost all he had for a month. The two chefs left with smiles thanking Boruto for his kindness. Boruto is now left with one coin and he still has to buy something for his mom’s birthday. When Boruto is leaving he heard Mugino’s belly rumbling and they went to eat food.

When Mugino is thanking Boruto asks him if he is not embarrassed for a Genin to pay for his meal and tab. Mugino said that he had nothing to eat and if he stays hungrier he will have trouble on his mission. Later Mugino went Boruto to his home. When they are the Mugino talks about how he grew up and how his life was saved by the Third Hokage Hiruzen Sarutobi. That is why he lives in a place where he can see the faces of Hokage.

He realizes that during the Third Hokage era the were a lot of kids without parents. Hokage was the one who took them and raise them as their parents. Mugino was one of those kids and Boruto asks Mugino to tell him more about the Hokage. Mugino reveals how he tried to kill the Third Hokage when he was young. He reveals that children were kidnaped and used as tools for assassinations.

Back then there were a lot of people who do that. They use Mugino to try to assassinate Lord Third by making him friends since he was young. Lord Third welcomes Mugino to his house and Mugino tries to stab Lord Third. Lord Third manages to grab Mugino’s hand, telling him that he knows that Mugino was an assassin.

He reveals how he knows about and he got someone to watch him. Mugino reveals that if he fails to kill him he will get killed and Lord Third Notice the curse mark on Mugino. Lord Third decides to let Mugino stop his shadow clone so that he can save Mugino. The real him went outside and defeat the men who sent Mugino to kill him. Back to the present Mugino give Boruto flowers that he gave to give Lord Third to give them to his mom.

With us here we will keep on releasing new episodes and updates every week after the release of the latest episode. This week that all we have about this Anime’s latest youtube preview and updates. You can also watch the latest episode of this anime on Funimation. Check the latest updates here Boruto: Naruto Next Generations Episode 180.