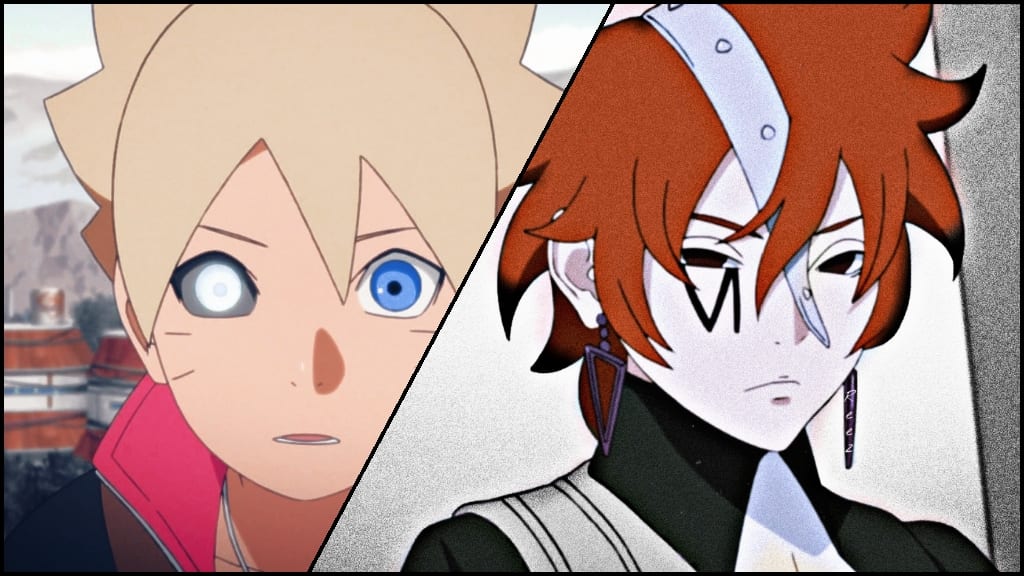 Boruto continuing to bring in heavily armed villains was a big deal. But, with the sudden appearance of Code, all the villains seem like pawns. The Boruto manga, Boruto: Naruto Next Generations, will be releasing its 57th chapter soon. While raw scans are yet to come out, we have some steaming spoilers from the upcoming chapter. The manga has developed through its different phases and broken its cliches. Tragic deaths and happy moments later, Boruto manga is finally at its peak of adrenaline all over again.

For anyone keeping track, we all thought Isshiki was going to be the ultimate boss. While the fight between the Konoha and the Isshiki was breathtaking, it seems like what holds ahead is a far bigger threat. It’s Code that I’m talking about– the most legendary of the legendary villains this manga has brought forward. Fans have shared their laughs and shed their tears with this manga so far. To witness how Kodachi and Kishimoto plan to take this further is going to be spectacular.

We have assembled spoilers and theories for the upcoming chapter. If you feel even slightly curious about the upcoming chapter after patiently waiting for a month, you’re at the right place. Here is everything we know so far about Chapter 57 of Boruto: Naruto Next Generations manga.

Chapter 56 gives out a lot of information about the Code. By the end, his ruthless power was also demonstrated. Following Isshiki’s death, he has sworn revenge on Boruto, Naruto, Sasuke, and Amado. Hiding mostly in the shadows for most of the manga before, Code makes a sudden entry as a villain.

A brief recollection from Kawaki and Amado tells us that Code was created by Amado like many other androids. Jigen ordered all the other Android to be killed but did not harm Code for his loyalty. Yet, Jigen placed limiters in Code to keep him killing everyone. It is noteworthy that Code has so far been an enemy of great power with the limiters on.

The chapter builds Code up piece by piece by stacking up more information about him. Code might be portrayed as a villain, but there have been indications of his worth being more than that. Kawaki points out that Boruto can make Code his vessel and thus solve his karma problem. But, Boruto has his morals at stake shall he agree with the decision. There has been no confirmation on the progress regarding this plot twist.

In the end, Code meets Ada, an android created by Amado who ‘knows everything.

The 57th chapter of Boruto: Naruto Next Generations will be titled ‘Ada.’ The cover of the manga too will feature Ada. Chapter 57 will contain no massive fights, but once again, the chapter will focus on stage building for whatever will be coming up in the future.

When Amado and Naruto are discussing the situation of Boruto, Amado offers him some tablets that were used to suppress Byakugan. Amado thinks that these will act as a suppression towards the Otsutsuki inside Boruto. These drugs, however, come with some major side effects ranging from partial blindness to death. What’s worse is that Boruto might need to take these drugs regularly. A conversation between Amado and Naruto will strike up as they seek closure.

The chapter will majorly follow the events following Code’s meeting with Ada. More light will be thrown over Ada’s abilities. Ada has clairvoyance which means she can look into anything happening in the world. Everything that happened in the past, just before she was born, she can see it as a memory. Additionally, Ada has superior abilities that come from her Senrigan. She can attract men and women and enslave them for her benefit. She even manages to freeze Code when he tries to attack her. Ada also harbors hatred for Amado as she blames him for her inability to experience normal and passionate love.

Code is going to confront Ada regarding the limiters in his body. Ada tells him that it is not possible even for her to do it. The removal of his limiters requires Amado’s biometrics. Meaning, they will need to get access to Amado’s voice command and a scan of his iris. Due to the complexity of hid mechanical eye, no Jutsu would serve the purpose either.

Chapter 57 of Boruto: Naruto Next Generations will be released on April 20, 2021. The chapter will be available for reading on Viz Media and Shueisha’s Manga Plus app.

The upcoming chapter will be setting up greater grounds for an absolutely epic outbreak of war. However, before Code strikes, Konoha might be facing off Ada.

As for Amado, his true intentions are still hidden. However, it goes without saying that he wouldn’t betray Konoha. He is wary of Code’s strength. Under the given circumstances, it seems highly unlikely for him to stab Konoha on the back.

Also Read: How Did Kurama Die in Boruto Manga? – Explained