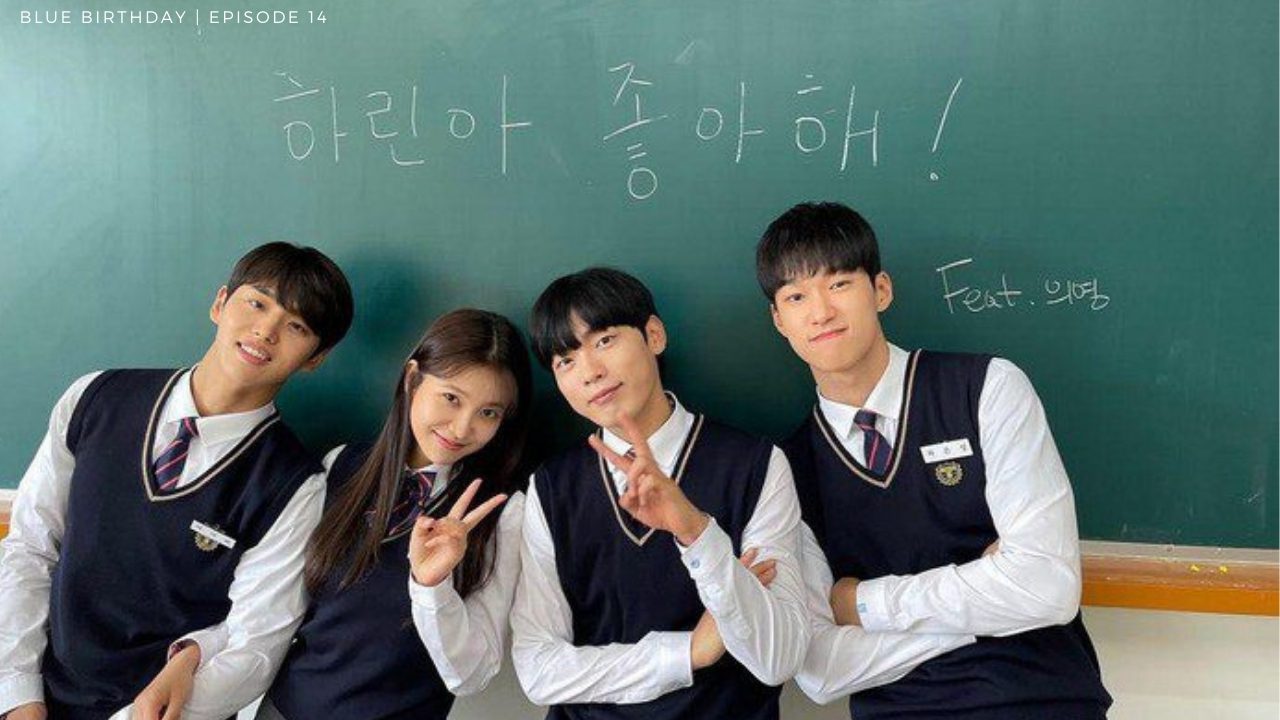 Blue Birthday Episode 14 is all set to be the third last episode in this scintillating series. The star-studded K-Drama is finally coming to an end, and we have mixed feelings. Blue Birthday stars Kim Yerim from Red Velvet and Yang Hong Seok from Pentagon in the lead roles as Oh Ha Rin and Ji Seo Jun respectively. The main storyline in Blue Birthday revolves around a group of high school friends and an unsolved murder mystery that has been written off as suicide. Ji Seo Jun abruptly died 10 years ago on Oh Ha Rin’s eighteenth birthday. The investigation led everyone to believe that he committed suicide. But what was surprising was that he had no reason to do so.

10 years down the line, Oh Ha Rin still feels Ji Seo Jun’s haunting presence in her daily life. This is when she comes across 9 magical photographs that Ji Seo Jun clicked. It turns out that when burnt, these pictures have the ability to take Ha Rin back in time. Now, Ha Rin must use this golden opportunity to find out what exactly happened to Ji Seo Jun.

In Blue Birthday Episode 14, we will see Ha Rin have one last chance to save Ji Seo Jun and finding out what exactly is Hye Min’s reason for killing him. However, this time, and quite interestingly so, Ha Rin is not the only one who is traveling back in time. Hye Min is there with her with evil motives. Now the question remains, will Ha Rin be able to bring Seo Jun back to life and prove Hye Min guilty? Or does fate have some other plans for Oh Ha Rin and Ji Seo Jun’s love story? Wait for Blue Birthday Episode 14 to find out!

In Blue Birthday Episode 13, we finally see things getting better for Oh Ha Rin. For starters, after Ji Hye Min is caught by the police, Ha Rin comes back to the present. A small dog comes running to her, and it turns out that she adopted Wu Jin with Ji Seo Jun. Ha Rin gets a call from Eun Seong about Seo Jun being drunk. Hearing this, Ha Rin runs to the bar where all the friends were drinking. Upon reaching, she finds out that Eun Seong actually lied to her to get her there.

Later, while walking back home together, Ha Rin and Seo Jun share some cozy moments with each other. Seo jun tells Ha Rin that her sister has gotten out of prison. He also informs Ha Rin that he must spend the weekend with his family to celebrate. The next day, after Seo Jun leaves for work, Ha Rin arrives at the animal rescue center. Among all the volunteers, there is an extra – Ji Hye Min. Ha Rin is surprised, to say the very least but puts up with Hye Min regardless. Before leaving the center, Hye Min asks Ha Rin for her number, which she reluctantly hands out.

Once Ha Rin is home and is busy spending some time with Wu Jin, she gets a call. As soon as Hye Min hangs up, she runs out of her home. Apparently, the call was from a hospital where Seo Jun was brought after an accident. He was on the verge of dying. In the streets, while looking for a taxi, Ha Rin received a call from Seo Jun. He said that he was absolutely fine. Ha Rin realized that someone has been trying to scam her.

Once  Ha Rin got back home, she called out to Wu Jin. However, the scared dog was hiding in Ha Rin’s bedroom. When Ha Rin tried to reach out to her, Hye Min attacked her from behind. Hye Min was frantically looking for the one last remaining photograph in Ha Rin’s bedroom. After Ha Rin gained consciousness, she tried her best to stop Hye Min but failed at it. Hye Min managed to burn the picture. This time, both Hye Min and Ha Rin were transported back in time.

How To Watch Dummy Mommy K-Drama?