Fox Entertainment releases a number of shows from time to time. One of its creations from 2019, which recently concluded its second season. The show was created by Emily Spivey, who also created Up All Night. Bless The Harts had quite a run. On its release, the series was taken in with quite an optimism. Over generic cartoon series, Bless The Harts was an adult cartoon series featuring real-world issues. Season 2 came to an end and now, what about Bless The Harts season 3? Well, in simple Season 2 have had some serious backlash comments on different forums. So, it might not come as a big shock to know that Bless The Harts season 3 has been cancelled. However, the reason for its cancelation was more than just a few negative comments on the internet. For fans of the show, the show’s conclusion has been disappointing.

Bless The Harts season 1 came out in 2019, and it ran for 10 episodes. Following the first season’s conclusion in January 2020, the series was renewed for a second season in the September of the same year. The second season ran for 24 episodes and finally finished airing on 20 June 2021. It must be a piece of sad news for those expecting a Bless The Harts season 3. Despite the negative reviews. The animated series still had their own bunch of fans. The adult cartoon series seized quite a lot of attention and could not be called a complete failure. Yet, Fox canceled the series after its two-year run.

Here is all about the Bless The Harts series and why it was canceled.

Also Read: T-Pain And Usher Auto-Tune Drama: What Did Usher Say To T-Pain?

The plot of the animated series is based in North Carolina. It features the daily life of Jenny Hart and the people surrounding her. Bless The Harts, like any other American sitcom, gives out a hilarious angle to the different relatable situations that common people find themselves in. The group of characters in the show is fairly likable as well. They are very peculiar and instantly attract a lot of fans for their adorable personalities.

As the protagonist, we have Jenny Hart (CV: Kristen Wiig). She is a single mother who works as a waitress with her best friend. She lives with her widowed mother Betty Hart (CV: Maya Rudolph), and her daughter Violet Hart (CV: Jillian Bell). Violet Hart is very artistic. She also sees Jenny’s boyfriend, Wayne Edwards (CV: Ike Barinholtz) as a father figure and cares for him. Wayne has been around the family since Violet was a baby. In Jenny’s imagination, she sees Jesus Christ (CV: Kumail Nanjiani). Finally, at Jenny’s workplace, we get to see Brenda Clemmons (CV: Fortune Feimster), Jenny’s best friend. 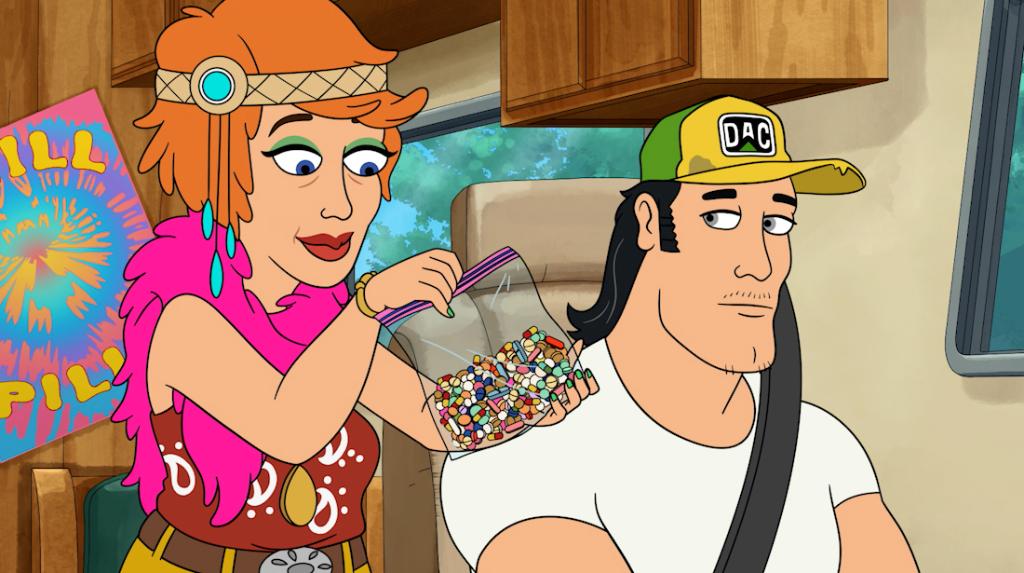 Also Read: Namgoong Min Uses A Veil To Hide His Identity In The New Trailer of ‘The Veil’

The initial announcement of the show’s cancellation was made back in April 2021. For some fans, this was a given. For others, it was not. Bless The Harts was not a brilliant show, but it was a moderately fine show and thus had a good fan following. The series was slowly turning better. In fact, prior to its finale, the series was starting to include new characters and good development in the previous characters’ arcs.  Regular fans of the show might be disappointed with not being able to watch their favorite characters like Betty Hart again.

'Bless the Harts' has officially concluded after 2 seasons and 34 episodes. pic.twitter.com/0O3HeUSakP

However, in the past few months, the number of viewers of the show had declined. While season one’s viewers rose up to a million, season 2 barely hit the mark. Most episodes were limited to a count of 600,000 viewers only. At the same time, Fox Entertainment has been other animated shows under it doing far better than Bless The Harts. Due to this, canceling the show probably did not come off as a tough decision to make. Fox Entertainment often discards shows that do not make much progress, and it is sad to know that Bless The Harts ended up being one of them.

In addition to this situation, viewers of the shows complained about the bland writing and poor humor of the show. For all such reasons, Bless The Harts season 3 was canceled. However, if you miss the series, you can binge it all over on the official website of Fox or on Hulu.