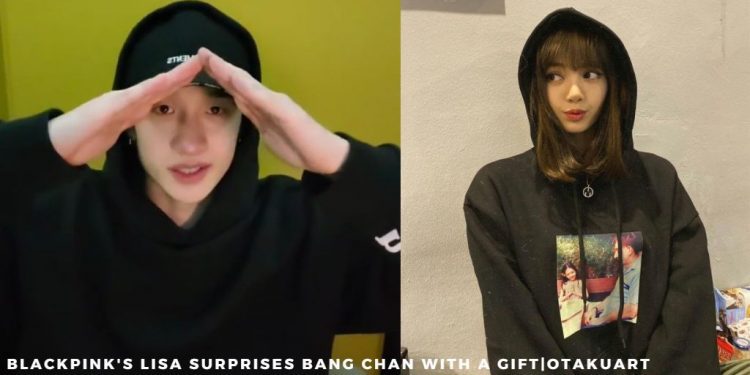 Blackpink’s Lisa surprised Stray Kid’s Bang Chan with a late birthday present. And by late, we mean pretty late because Bang Chan’s birthday was on the 3rd of October. Guess we aren’t the only ones who forget to buy a birthday present for our friends on time. Kpop sensation and 1/4 of the mega-popular girl group Blackpink, Lisa does too. But who can blame her? Lisa has been on a roll for these past few months. From releasing bops like ‘LALISA’ and ‘Money’ that the whole world is rocking to and breaking records every single day, Lisa is a busy girl. On top of all that, she was also found Covid-19. Thankfully, Lisa is now fully recovered and is back to work.

Blackpink’s maknae and Bang Chan are both 97 liners. Furthermore, when Bang Chan went on a live, a talked about how Lisa and he had been friends ever since their trainy days, fans were not surprised. Blackpink’s Lisa and Stray Kids’ Bang Chan are both known for being social butterflies. Not to mention, they are both friends with GOT7’s Bambam, who is literally the king of social butterflies. So when on his recent Vlive, Bang Chan thanked Lisa for sending him a late birthday gift, fans of the kpop idols could only coo over their wholesome friendship.

Fans who were streaming Bang Chan’s Vlive were in for a pleasant surprise. While he was cutely jamming to ‘Hoodie Season’ by Stray Kids, Bang Chan started to show off his hoodie. Furthermore, he talked about how it’s always ‘hoodie season’ for him, but he loved the one that he was wearing in particular. Bang Chan was wearing a staple hoodie by the popular brand ‘Chrome Hearts’. Those who follow Lisa’s style know that she is a huge fan of the brand is often seen rocking their styles.

Moreover, Bang Chan went on to call Lisa ‘pretty savage’ referring to Blackpink’s song. Being the playful person that he is, Bang Chan did not miss the opportunity of pulling Lisa’s leg for sending a late birthday gift. However, he said that he is thankful for it, regardless. We cannot help but swoon over this moment.

Also read: A Look At The K-Pop Friendships That Nobody Expected!