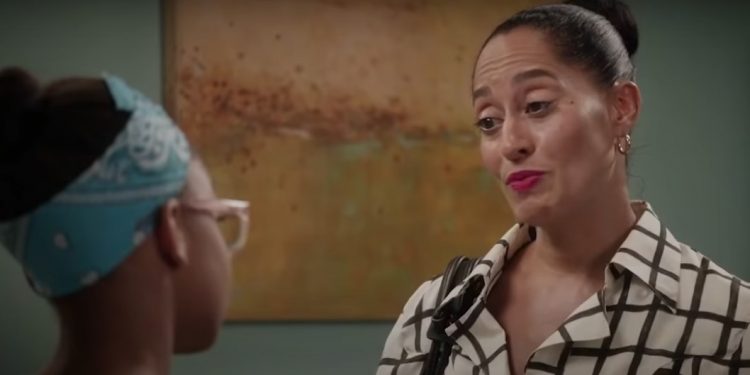 Dre and Bow’s funny family stories are back in Black-ish Season 8 Episode 2. Firstly, Dre continues with his zealous cultural identity preservation as he teaches his offspring non-conformational standards. The premiere episode of the season had Michelle Obama. And that’s just a prelude to all the fun things to come this season. That’s for sure, and considering that season 8 is the final season, we’re bound to find a lot of surprises.

Black-ish was created by Kenya Barris, and under its sitcom format, it gathers Anthony Anderson, Tracee Ellis Ross, Yara Shahidi, Marcus Scribner, Laurence Fishburne, and Jeff Meacham. It is executively produced by Anthony Anderson, Brian Dobbins, Helen Sugland, Jonathan Groff, and Laurence Fishburne. Now in its last season on ABC, let’s take a look at this episode here at Otakukart.

Andre imagines he’s a batter for the Dodgers in this episode about talent. At work, he’s been promoted from urban to general marketing, and he’s excited for bigger budgets, a broader reach, and a seat at the table.
Griffen Cameron Hopkins (played by Reid Scott) is a prodigy in general marketing; at the age of twenty-one, he had already made his first national commercial.

Andre, envious and irritated, considered the man’s white privilege and how it’s deemed odd when he acts erratically at work. Andre is ecstatic when his boss Leslie tells him they’ll be making a Super Bowl commercial, but he downplays the fact that it’ll be his first. Diane has a new piece of jewelry from a cute boy at school named Nate, but it’s clearly from a gumball machine, so she discards it. Ruby approves and reminds her not to lower her standards, but Rainbow and Dre believe that it’s all in mind.

Andre pitches a parody ad at the Super Bowl commercial pitch meeting, but his coworkers aren’t impressed. When the prodigy comes up with a vague idea that his coworkers go crazy for, Andre fails to develop a slogan to go along with it. Andre draws up a new commercial idea, using his frustration as inspiration, and pitches it to his coworkers, but they aren’t interested. He lays out argument afterthought, but none of them seem to be working.

Diane returns home from her date with Nate that night. There were some awkward moments, and when the boy’s car wouldn’t start, they were forced to take the bus home. Rainbow tells Ruby that the boy is officially a scrub, but Ruby insists that it’s all about the chemistry. Rainbow persuades Diane to go on another date with Nate, convinced that he could be the love of her life or a perfect friend. Andre goes down to Urban Marketing at work to talk about his problems with Charlie and Josh, who tell him he’s just stuck in a creative rut. Charlie tells him that he must overcome his fear of failing in order to reach his full potential.

Tune in to ABC during the airtime of ‘Black-ish’ season 8 to catch the latest episodes as they air. You can also watch the episodes on ABC’s official website or through the ABC app. All you’ll need is a valid cable provider’s username and password. YouTube TV, Hulu+Live TV, Xfinity, Sling, DirecTV, and Fubo TV all offer live streaming of the show.

The most recent episodes are incorporated to Hulu’s library shortly after they air on television. As a result, you can watch the series right now on the streamer. If you want to catch up on the episodes that have already aired, you can do so on Spectrum, Amazon Prime Video, Microsoft Store, iTunes, Vudu, and Google Play.

Black-ish season 8 episode 3 will release on January 18, 2022, at 22:30 hrs Eastern Time, United States, on ABC Network. This episode’s title is “Bow-Mo,” and it was written by Kenya Baris. Every episode drops on a weekly basis on Tuesdays, with each episode having a runtime of 22-23 minutes. With this, we conclude our coverage of “Black-ish” season 8 here at Otakukart. Thanks for reading our article, and please keep coming back to our website for more daily updates on all your favorite movies, series, and shows.

Also Read: When is The Matrix Resurrections Coming? Neo’s Latest Adventure with Trinity

Who Is Natasha’s Husband? The Atomic Kitten Star’s Love Life