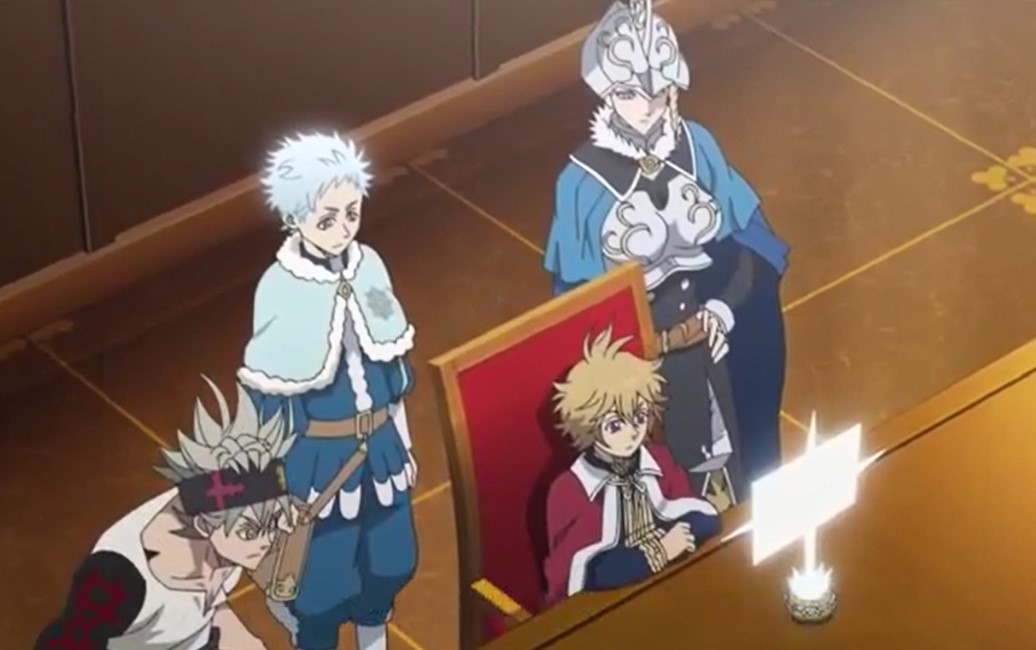 Asta has met with a mysterious hooded man who reveals himself to be the vice-captain of Black Bulls. He told Asta that he would teach him to control the power of the devil. The two head to the Magic Knights’ Captain meeting. Nacht unleashes the devils since there was no order in the meeting. The captains thought Nacht is an intruder, but Julius reveals that he is a spy that was sent to the Spade Kingdom to investigate. Black Clover is taking a break; it will return soon, and we will keep you updated when it returns.

Nacht has managed to create order in the meeting and told the captains to sit down. He told them about the plan of saving Yami and William. He reveals that Asta’s anti-magic is the key to the battle, and they are leaving in three days to attack the Spade Kingdom. Meanwhile, in the Spade Kingdom, the ritual of the advent of Qliphoth is underway. Once the ritual is completed, the real world will connect with the underworld. Yami and Vengeance would lose their lives as sacrifices.

In three days, the first gate of seven gates to the underworld will open. The Magic Knights must fight the Dark Triad before that happens. Feguleona suggests that they should also ask the Heart Kingdom for help. Noelle wakes up in front of Eye of the Midnight Sun. She wonders where they are, and she finds that everyone is safe, but Lolopechika is the one who is missing.

Noelle asks where she is, and Patoli said they are in Elysia. Patoli reveals that Elysia is an area in a strong magic region located deep within the Heart Kingdom. Noelle felt incredibly dense of mana overflowing in Elysia. The elves’ kids come and ask if they are awake. Noelle wonders who those kids are, and Patoli said they are the descendants of Princess Tetia of the Clover Kingdom and Licht. Nero realizes that before Lady Tetia dies, she was carrying twins, and they have survived. 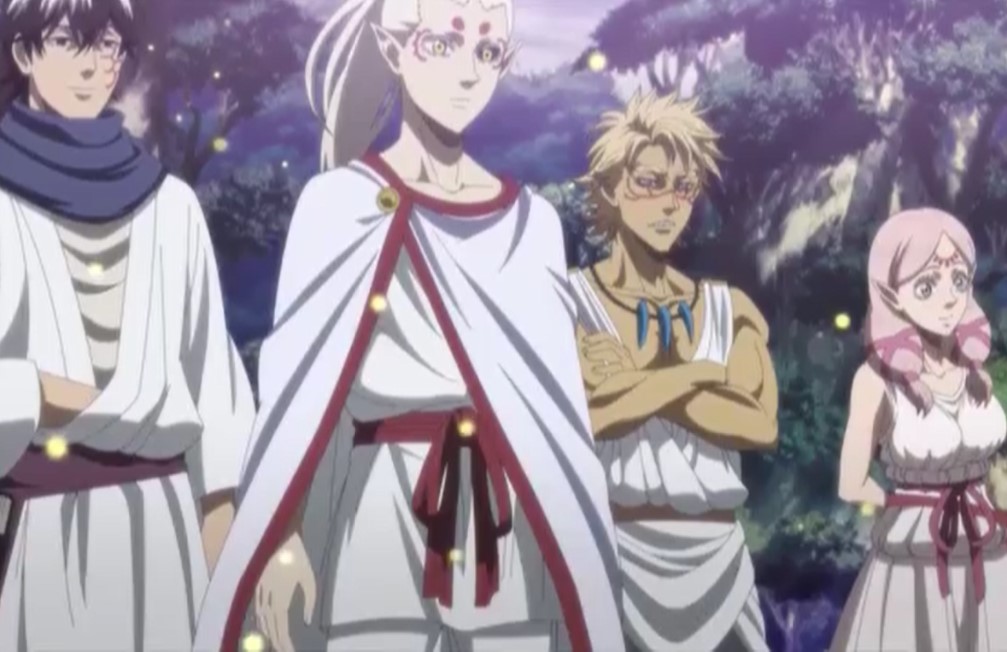 That day during the battle, Nero uses her power and seal Lady Tatia’s wounds. After saving Tetia, Nero wakes up in the form of a bird. Many years passed, and Nero didn’t know what has happened to Lady Tetia. In the present, Nero is glad that Lady Tetia has survived. She realized that the twins are born of an elf and a human. Patoli told them that this is the new village of the elves.

They have just recently found about Elysia and Mimosa asks why they save them. Patoli reveals that it is because of Dryad, the guardian deity of Elysia. Dryad sent a divine revelation telling them to save the Magic Knights. After receiving the divine revelation, Eye of the Midnight Sun rushed to the Heart Kingdom, but it was too late when they arrive. They saw huge explosions, but all of the Magic Knights used their powers and survived those explosions. Noelle reveals that Lolopechika has been kidnapped, and she is not strong enough.

Noelle asks Patoli to teach her how to get stronger, and Patoli reminds her about their training. He asks her if she thinks she can defeat an enemy that she failed to defeat after training for six months. Noelle replies that it is not easy, but she will surpass her limits with the help of others. Patoli reveals that he will train them to use the elves’ esoteric art, ultimate magic. 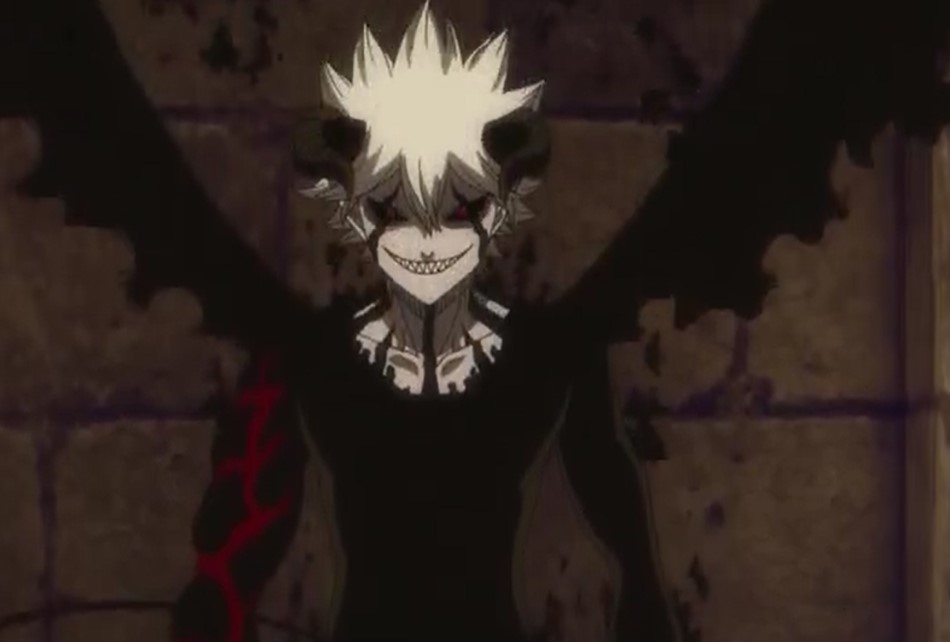 Meanwhile, at the Clover Kingdom, Julius and the others have received the message coming from Gaja. He told them what has happened to the Heart Kingdom and that the Magic Knights are alive. They are in Elysia, and they will training there to get stronger. Julius told Gaja that they will attack the Spade Kingdom three days from now, first thing in the morning. Gaja told Julius that the Heart Kingdom would fight alongside the Clover Kingdom. In honor of Heart Kingdom, they are going to reclaim their Queen.

Charlotte vowed that she wouldn’t let Yami die, and Gaja said he would save the Queen no matter what. Nacht headed to the Black Bulls hideout and told them what is going to happen. Vanessa realizes that Nacht is the vice-captain. She couldn’t recognize him the first time she sees him since it was a long time no see. He told them about their characters. Nacht told them if they don’t want to be judged by how they look, they must do good things. He left them with a message that if they want to save Yami, they have two-days to get stronger.

Later, he met with Asta and headed somewhere, and Asta asks what this magic is that he uses to teleport them. Nacht said it is shadow magic, and they both get inside the former noble house. Nacht unleashes a Shadow Magic: Dark Garden Invitation. He told him that he is going to train with him and perform The Devil Binding-Ritual. Asta will make a contract with a devil and formally make its power his own. Nacht reveals that the ritual is a forbidden ceremony that puts the devil’s powers at his command. They summon the devil within Asta, and he has to defeat and make a contract.

Black Clover Episode 170 date will release Tuesday, 30 March 2021, at 6:25 JST. You will be able to watch Black Clover online on  AnimeLab, Netflix, and Crunchyroll. More updates will be available on the preview below.

Read Black Clover Episode 169 and find how the vice-captain of the Black Bulls has arrive at the Clover Kingdom.