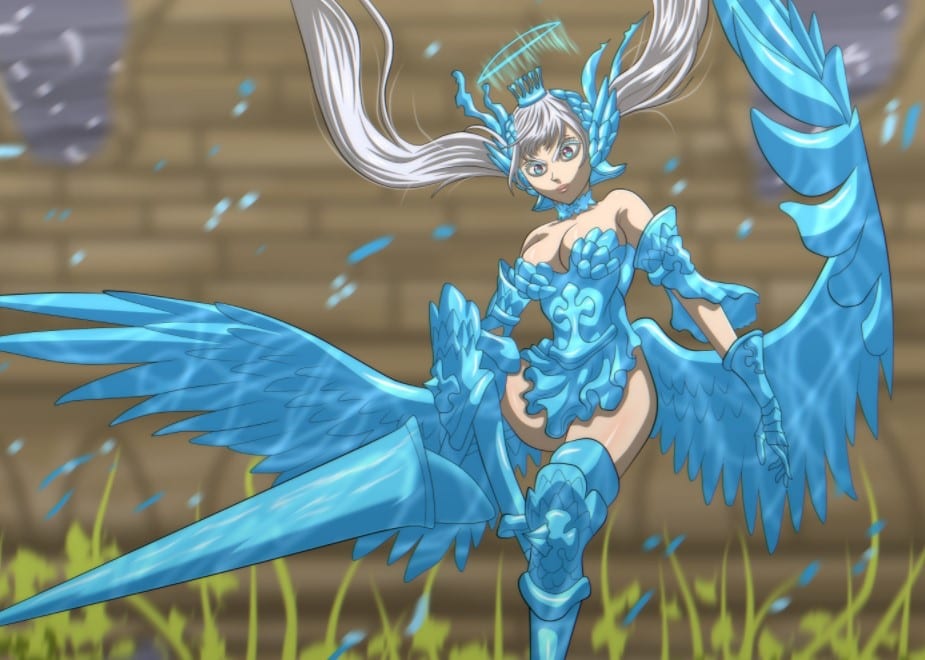 Black Clover will take a break and return after a week. The brawl at Spade Kingdom Castle continues while the Magic Knights face the Supreme Devil Megicula. Let’s take a look at the recent development of the latest chapter. Megicula has survived the blow landed by the Spirit Guardian Gaja. She comments the spell is fueled by burning that caster’s life. Megicula is impressed that the power of the magic surpassed what she expected. The chapter title is ”Beyond Tenacity.” Gaja continues to fall with a body the looks like charcoal.

Megicula praises humans that they surpass their limits and show great fights. She gained her complete form with two horns and wings at her back. Megicula reveals that she is immortal since her body is under the protection of an ultra-high-speed recovery curse. Udine is surprised to see no scratch on Megicula’s body, and Noelle tried to talk with her. Noelle has lost the ability to use Saint Stage, and she realizes that it will take her long to use that power. Megicula reminds her that it is like in their last fight where she failed to use Saint Stage powers.

Udine is worried that Gaja and Rill are lying on the ground unconscious. Megicula told the Magic Knight that they have no match, and it is over for them. Megicula summoned a beast that circles Noelle and Undine, filling the room they are clashing inside. Noelle realizes that it is no over yet and decided to surpass her limit. Before the beasts swallowed her, she entered her Valkirye form again and wiped out the beasts near her. Megicula is impressed that the Silva girl is back in action. Let’s find more below.

Noelle survived the blow from the beast as she makes her way toward Megicula. Megicula comments that: Noelle won’t will the battle no matter how she struggles, and she is just wasting time; there is no point for Nolle to fight back since she will die soon; Megi wonders if that is how humans surpass their limits and create spells. Megicula brags that she is undefeated when she is inside the Decaying World.

Megicula said no humans could touch or scratch her when she is inside her territory, Decaying World. She also said the Devils never disobey those whose level is higher than their level, especially humans. Humans stick to stupid ideas of never giving up and meaningless things. Acier Silva got motivated by her love for children, and it became her weapon during the battle. Gaja fought with his loyalty to the Queen that he’s sworn allegiance. Noelle is fighting with hope that Megiculas thinks that hope doesn’t exist when she is around.

Megicula wonders why humans never give up since they keep on holding onto something that doesn’t exist. Noelle gets furious with a bruised body and damaged Valkriye dress. Noele decided to take some shots back at Megila back and said she knows about the battle but saying that she can’t win, it is too early for that prediction, and she knows everything. Noelle said never to give up belongs to humans, but the Devils will never understand.

She wonders if the Devils are insane; even though there is a slim chance of winning, humans have to take risks and act. Noelle feels like she wants to kneel and cry, but it is not time for that since humans’ strengths lie in not giving up. Megicula likes the spirit and the speech that Noelle is addressing. Noelle said if they give up, they will never be victorious. Megicula replies that she enjoys nature, but she has no time to waste; she decides to unleash Curse Warding: Exploding Life.

Lolopechika is also nearby, ready to battle, but the Curse detonates her, and Megicula decides that she will kill everyone inside the Spade Kingdom Castle. Lolopechika’s body began to change as cracks emerge and Megicula said she fully manifest here. Noelle wanted to save Lolopechika, but someone appears in front of her, and a Grimoire opens. In a blink of an eye, Asta wiled a Devil Slayer and told Noelle that he made it in time. He is holding Lolopechika, and Noelle shed tears that Lolopechika got saved in time. Megicula wonders who that boy is who ruined her plans.

Black Clover Chapter 301 release date is 1 August 2021, which you can read officially on Viz; you also look at Spoilers & Preview: One Piece Episode 984.

Will There Be Betty Season 3, What’s Next For The Skaters?