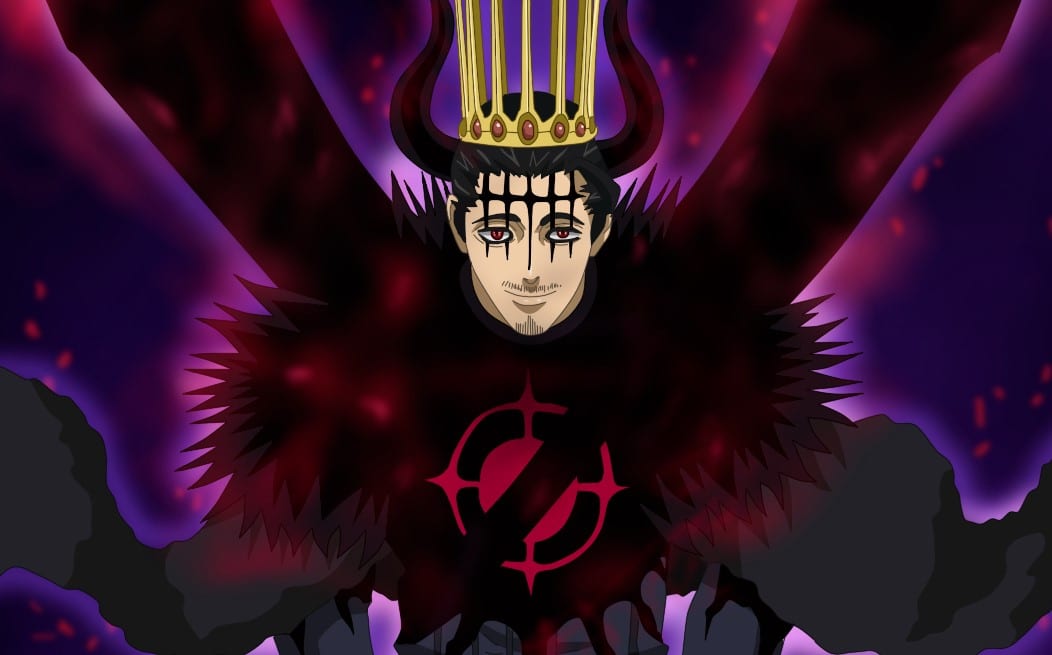 Black Clover is taking a weekly break on Sunday. The chapter is titled A Duel With a Distant Inferior. With only two minutes left, Asta and Liebe manage to slay the Supreme Devil into peace. After the Devil Union Mode has worn out, the two celebrated in front of Natch. Liebe shrinks and stays on top of Asta Shoulder. Nacht complimented that and told them that ”Well done, you, idiot.”  He told them that they had perfected the Devil Union Mode. Asta gets excited that his training and Binding Ritual has helped him get stronger.

Nacht realizes that the Dark Triad has power on the level of the Highest Devil Class. Asta’s Union Mode will take longer since they have to help others fighting with Dante, Zenon, and Vanica. Jack is fighting with Dante, Yuno is fighting with Zenon, and Charlotte, along with Rill, is facing Vanica in Megiculaa’s form. Captain Yami and Vangeance ate at the underworld where the experiment is about to be finished. Nacth is worried that they have to come with a plan that will be useful without losing a single life.

Outside the Spade Kingdom, Castle Merleona is thrashing the Devil, and Fugelona is also stoping the Devils from rampaging and killing humans. Nacht realizes that Morris is the threat since he is the key to finish the ritual. Morris is causing the gate of the underworld to open faster. Nacht decides that they have to take down the Dark Triad before the second gate opens. He realizes that if Union Mode takes the time, they will be relying on the Anti-Magic.

Meanwhile, in the other room, Dante is exchanging blows with Jack. Dante notice that Jack’s magic is capable of changing its properties to match the opponent’s magic, but his boy magic is powerful for Jack to handle. He told Jack that he is impressed that he is still alive. Dante comments that Jack is at his limit, and he can finish him any time. Jack replies that he is going to slash Dante.

Magna Swing of the Black Bull

Dante told Jack that he would thank him for entertaining him. He got attacked with exploding fireballs and wonders who did that. After the explosion, Magna appears with Zora. Dante wonders who are the weird-looking guys and told them that the weak ones are not supposed to be here. Dante realizes that this guy is Yami’s peasant. Jack tries to act tough and told them to get out of his way; he can’t handle Dante. Dante comments that ”you heard him, there is nothing you can do.”

Magna told Dante that they are heard to crush the Devils and rescues captain Yami. Dante said that the two are not at a level to entertain him like Jack. He told them that their magic is too low, and even if it is a 2v1 battle, they don’t stand a chance. Dante is glad that their magic is not an Anti-Magic or unique Arcane Stage Magic. Magna told Dante to stop bragging since he is the one who will defeat him on a 1-on-1. Dante gets angry and levels up, telling Magna that he made a huge mistake by mocking him.

Magna attacks Dante with a chain that Dante puls with his hands. Dante’s magic decreases, and he realizes that he is no longer at 100 percent. Magna realizes that is why he came up with this spell that sucks the magic. He unleashes Secret Flame Magic: Soul Chain Death Match. The Chains began to suck Dante’s magic, and Magna comments that Magna Swing of the Black Bull will crush you. Dante is surprised that Magna is pulverizing him with heavy blows.

Black Clover Chapter 292 Release Date and Where To Read Online?