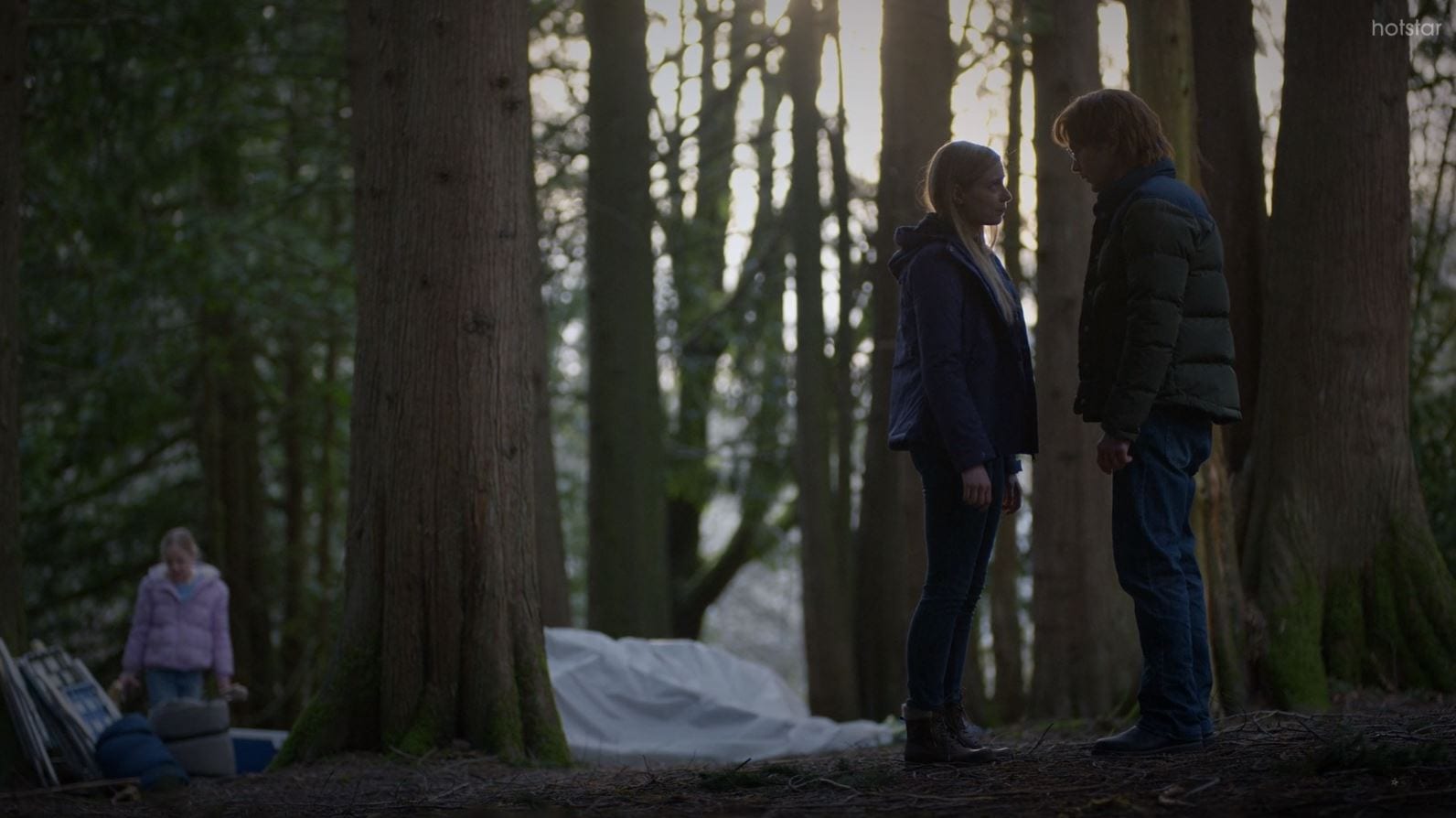 Ronald and Scarlet in the camp - credit ABC

Created by David E. Kelly, Big Sky is a crime drama TV series based on a book by C.J. Box called The Highway. The story follows the mystery of two sisters, Danielle and Grace Sullivan, who went missing on a road trip. They were heading to meet Danielle’s boyfriend when they got kidnapped by a truck driver. This incident occurred in an isolated part of Montana Highway, due to which there were no witnesses. This leading to a wild goose chase lead by Private Detectives Cassie Dewell and Cody Hoyt. Joining in their investigation is Cody’s ex-wife, Jenny Hoyt. It shortly becomes clear that the sisters weren’t the only ones to go missing as we witness a race to stop a killer. Now that we are headed to the penultimate episode let’s discuss Big Sky Season 1 Episode 15 Preview and Recap.

Last episode, we saw how Scarlet’s sister was getting suspicious of Ronald as she claimed she had seen him somewhere. Ronald later even sees a text on Scarlet’s phone saying that Arthur wasn’t the man Scarlet was thinking. So after he drops Scarlet and Mary, goes to Mary’s house. Here he finds out how Mary had researched him thoroughly while also contacting Cassie and Mark. So he makes use of a box cutter to kill her. Later, they arrive to find that Mary was missing while there was a bloody footprint in the house. They even find a body in the freezer that had been there for a long time. Later as Angel visits Jenny, they hear a noise after which a truck crashed into the room. 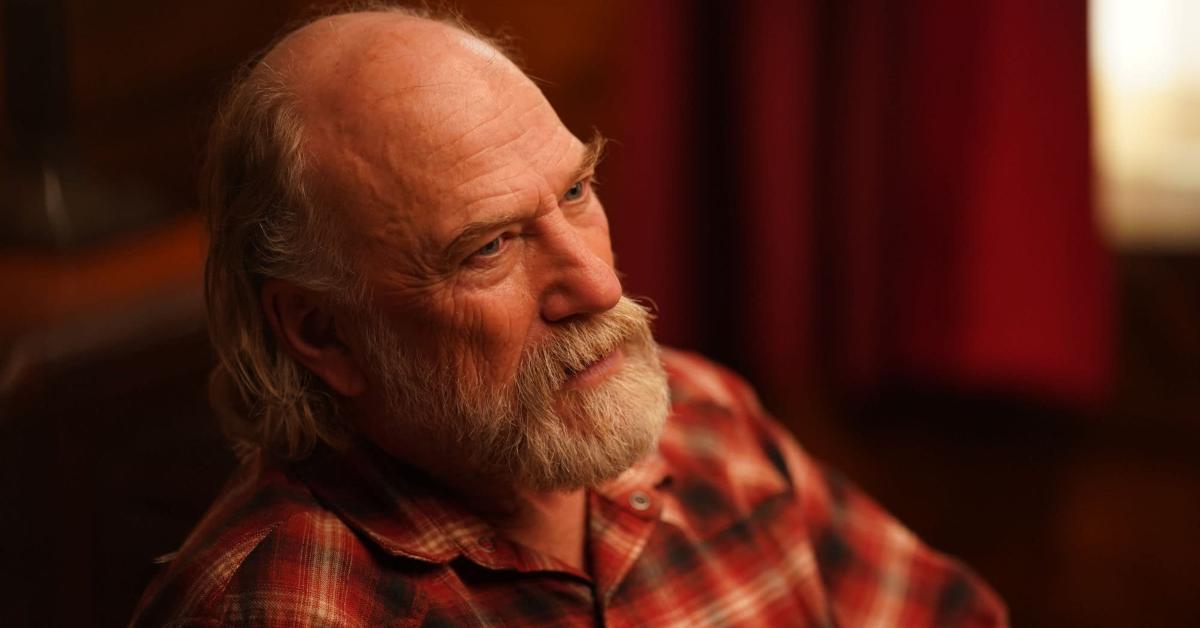 Big Sky Season 1 Episode 14, titled “Nice Animals” starts with the revelation that it was Rand Kleinsasser who was the driver of the truck. He trashes Jenny’s room from which Jenny survives but is left injured. Meanwhile, Angela isn’t able to make it through as she passes away. Sheriff Wagy confronts Horst on how there were some papers found from the crime scene which could just compromise his position. This means that he can’t protect Hirst anymore. Meanwhile, Cheyenne confronts Wagy as he warns him of some new changes coming. Elsewhere, at Blake’s funeral, Margaret boldly states to Horst how she plans to kill him.

At the same time, Ronald takes Scarlet and Phoebe on a camping trip for which he selects a spot with no cell service. While this was happening, Cassie and Mark go through Mary’s house to find a body of a man in the freezer. This was a body of a person who had disappeared around eight years ago. On further investigation, they found out that the man was Phoebe’s father, Steve. 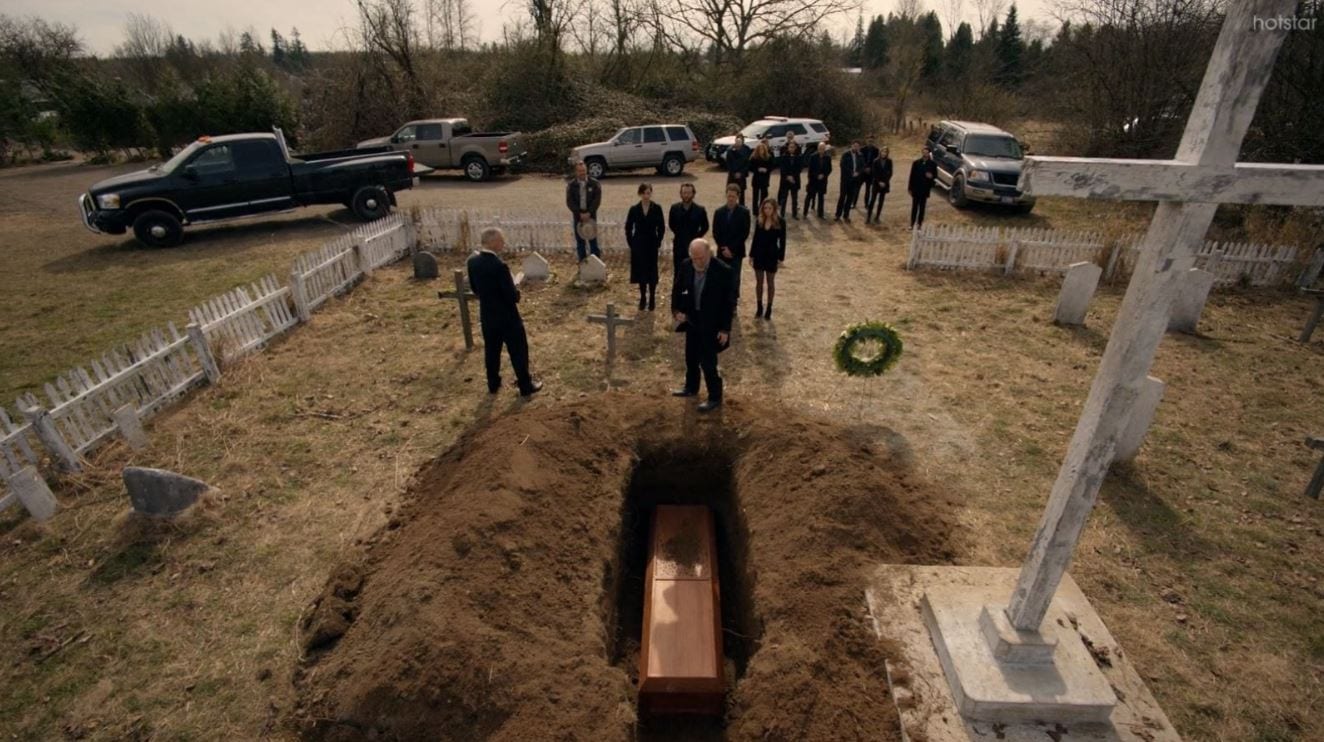 Jenny visits Cole’s mother, who was eager for revenge, and informs her that Cole knew some secrets about the ranch. As Jenny and Cassie go back to Gil, he shows them a part of the ranch that was filled with toxic waste. Horst allowed fracking companies to dump them there in exchange for money. This waste has led to countless deaths of ranch workers. Wagy informs Horst of Jenny, Cassie, Rosie, and Gil entering the ranch. Meanwhile, Mark and Kerrie find out that Ronald took Scarlet and Phoebe on a trip. In the end, we see how Ronald was trying to bury Mary’s body at night when Phoebe spots him doing something.

Big Sky Season 1 Episode 15, titled “Bitter Roots” is set to be released on 11th May 2021. The episodes by this Big Sky are scheduled to be aired at 10:00 pm ET / 9:00 pm CT. Big Sky follows an episode release pattern of one episode every Tuesday. If you wish to watch the episode right when it airs, you must change the above-mentioned time to your local time zone. We even have the episode title and release date for the next episode as well. The next episode, that is, episode 16 of Big Sky, is meant to be its Season Finale. The final episode titled “Love is a Strange and Dangerous Thing” will be releasing on 18th May 2021. The second season for the show was announced this May itself.

Big Sky Season 1 Episode 15, titled “Bitter Roots” will continue after Phoebe sees Ronald. She asks him what he was doing, to which he responds to come and see herself. Ronald was burying the body of Phoebe’s Aunt Mary. And even though Ronald really likes Scarlet and her daughter, if she really understood what she saw, Phoebe could be a loose end. Considering Ronald had already killed Mary, killing Phoebe doesn’t seem far off. But this will make things far too messier. The upcoming episode is about to be the penultimate episode of the season. And this episode will have a lot riding on it, considering how much of the story would have to be showcased before the season finale. The Ranch has become a dangerous place to be, where Cassie and Jenny must raise the question if they are against the wall this time around.

The episode Bigger Roots’ promo suggests that Scarlet gets an alarming call where she finds out that her sister has been missing. She had just received a call from someone causing Ronald the realization of how much he had messed up with killing Mary. He must come up with a quick plan to save himself from this situation and decide his next move. At the moment, Phoebe seems to be the key to the reveal of Ronald’s secret. She must have been hiding, considering that she didn’t get what was happening. Even so, she did understand it, it would be a child’s allegations against an adult. Meanwhile, back at the ranch, Cassie, Jenny, Rosie, Gil have found themselves in a whole lot of mess. They will be forced to take on the most hostile men of the Kleinsasser gang. But this family will have to fight through. 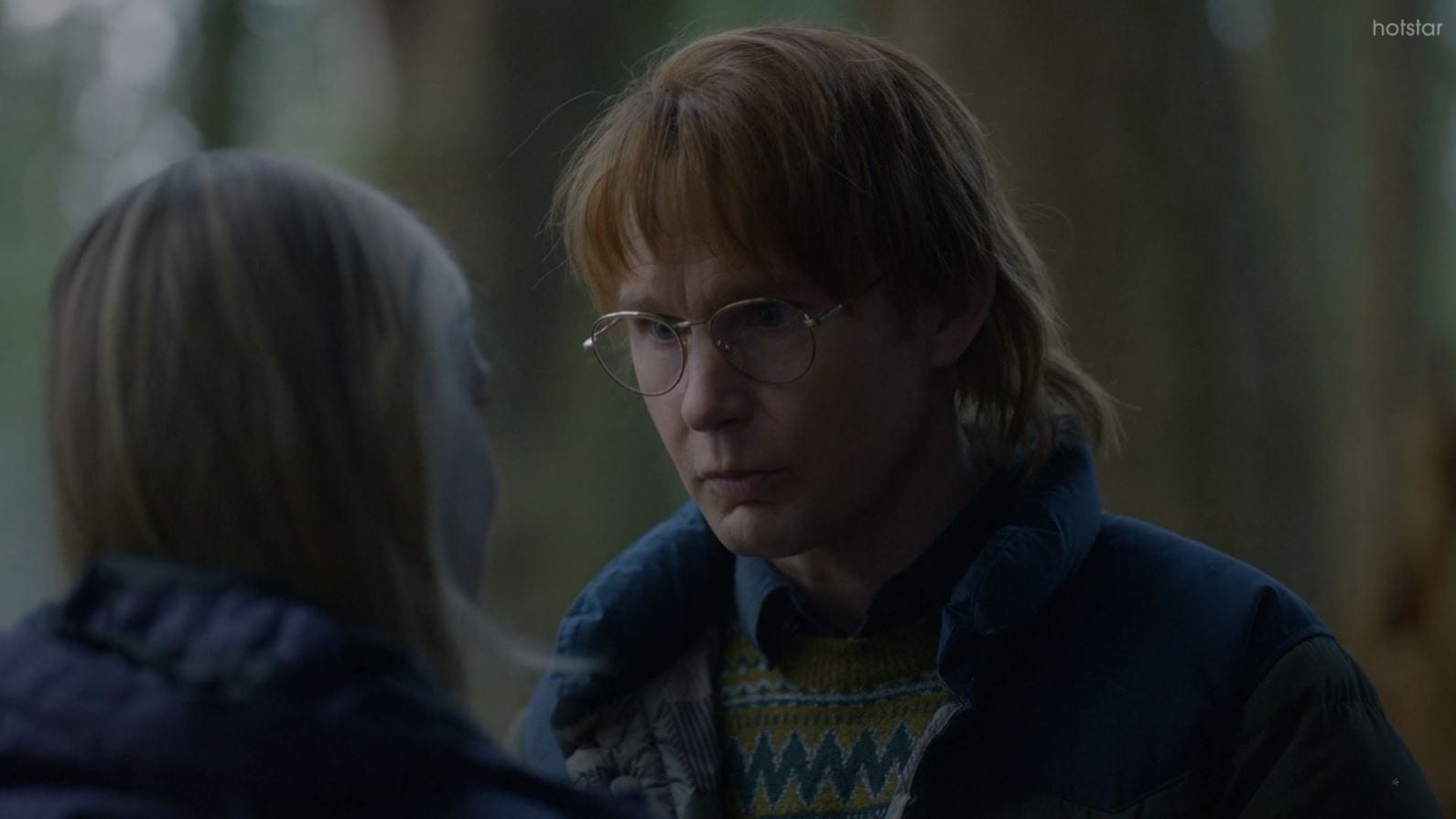 Ronald is not unlike any predator, he explains to Phoebe. He tells her how there are animals in the forest whose nature was to kill to stay alive. This could be the foreshadowing by Ronald as to how he will resort to killing someone in order to survive. He won’t be backed into a corner, even if it is a little girl that happens to be a threat to him. Now that her sister is reported missing, Scarlet must fear for herself and her daughter. The man she lives with is the very thing that could end her family. Maybe Ronald won’t even resort to murder but just might go crazy with all the thinking he has to do to hide his crimes. Although people may not have been able to recognize this, Ronald doesn’t know how to be normal again.

The situation is dire for him as the constant idea in his head would be to kill off Phoebe too. But this could be avoided if Ronald makes sure to explain what happened in a way that satisfies Phoebe. Or else she might ask some questions that could get him into big trouble. The good thing is that we can confirm that Scarlet will be alive. From the synopsis of the next episode, we know that Scarlet and Ronald will still be together. He will be under bars but will soon escape to the sunset with Scarlet. But here, there is no indication that Phoebe will be with them, indicating that Phoebe could be harmed in the following two episodes. But even so, her mom will choose to be with the man who caused it, the reason to which should be interesting.

Also Read: What To Expect From Big Sky Season 2?

Where to Watch Big Sky? 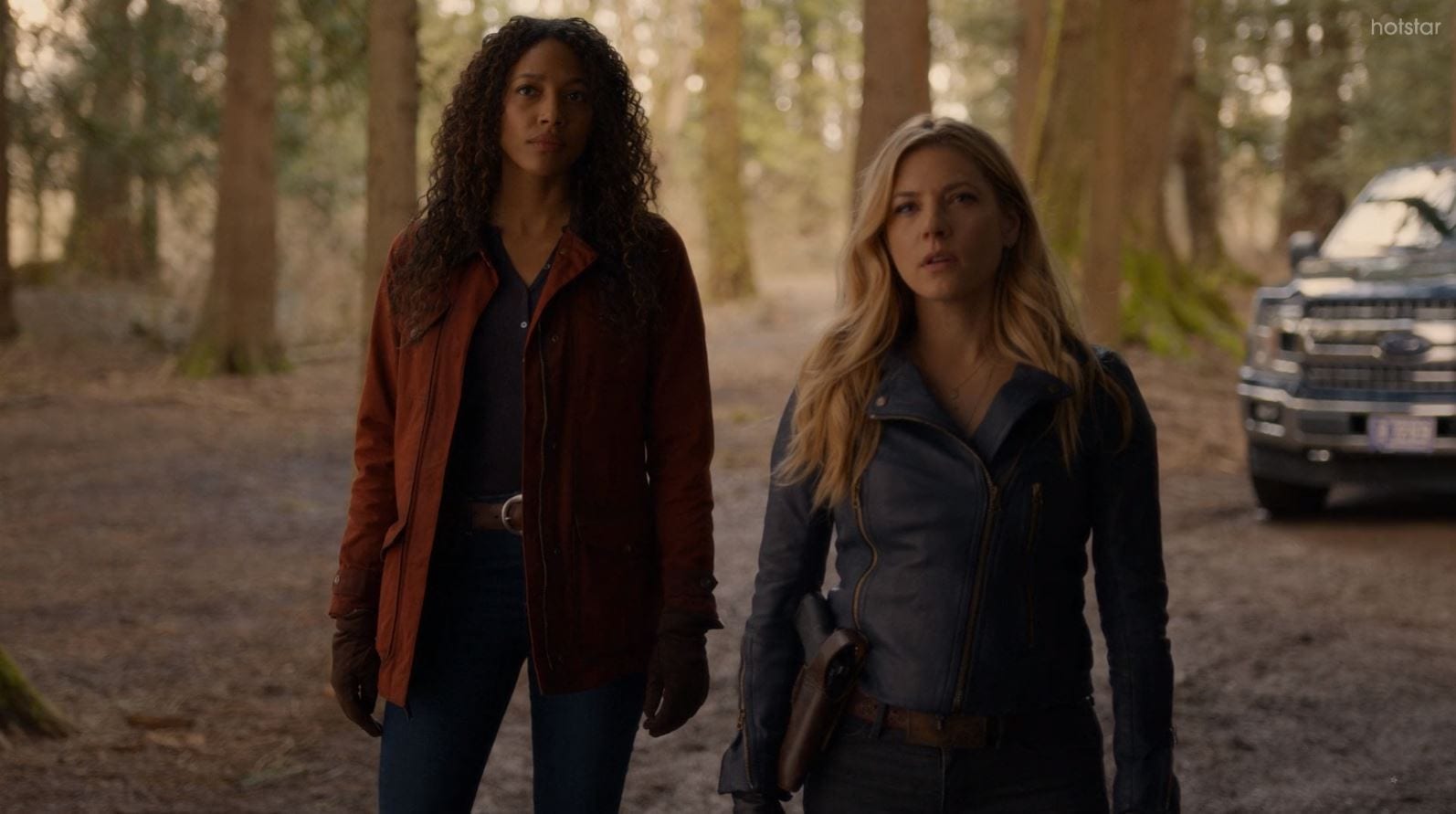 You can watch all the episodes by theBig Sky when they air on the set time on ABC. If one misses the episode, they can even catch up with them by streaming them on ABC’s website or App a day after they air. Big Sky is even available to stream on Hulu, Apple TV, CTV, Disney Plus, and YouTube TV. The episodes by Big Sky can even be live-streamed on platforms like DirecTV, Xfinity, and FuboTV. If one doesn’t wish to subscribe to any of the above platforms, other options to view the episodes by Big Sky would be to purchase them on Amazon Prime Video, Vudu, iTunes, and Google Play. Big Sky follows a TV sitcom format of an hour-long episode along with commercials. Other ABC shows one can watch include The Rookie, Black-ish, and Grey’s Anatomy.