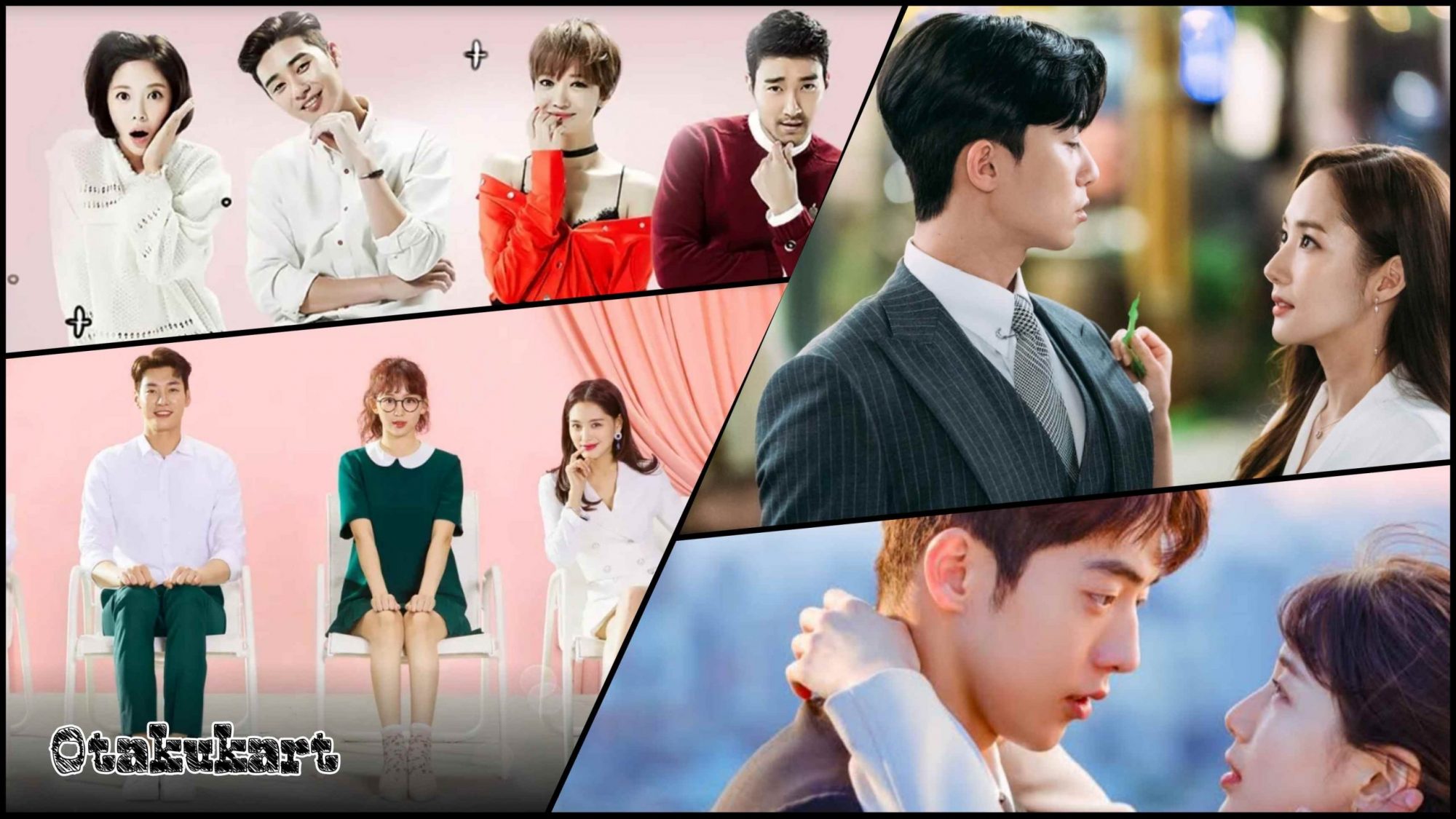 If you have been a Korean drama fan for a while, you must be aware of how popular office romances are here. Despite the abundance of them, South Korea still doesn’t stop making more. We aren’t complaining,, though! Even if the story on the surface seems pretty similar, most office romance K-dramas have their own unique flavor. Don’t you think that they are a lot better and more interesting than the concept of falling in love at first sight? Development of feelings between two people working at the same place, interacting almost daily, helping each other fix their flaws, and the moments of sexual tension that grow between them gradually are far more natural.

Well, we know that falling in love with your boss is far away from being natural, but at least it makes more sense! We have picked out the top nine best office romance K-dramas that you should miss out on. From bickering to cute and sweet, you are gonna find all types of office love here to keep you busy during the weekends.

‘She was Pretty’ marks the first K-drama of Park Seo Joon as the main lead, and he totally nailed his part! Kim Hye Jin is an attractive woman who has to work hard to make her ends meet. However, things were pretty different some fifteen years ago when she used to be the most beautiful girl in her school and led an extravagant life. Unfortunately, neither did she age well nor could she enjoy her fortune. When her school friend, Ji Sung Joon, who hasn’t seen her in years, asks to meet him, she realizes that he must have had a flawless picture of her in his mind. In order to not disappoint him, she sends her beautiful best friend, Min Hari, in place of her to meet him.

Thinking that she has gotten herself out of trouble by ending things with him on a good note, she gets devastated to find out that her new boss is none other than Sung Joon, who seems to dislike her at the workplace. The series is realistic, hilarious and teaches us to love ourselves just the way we are. Although the male lead doesn’t get along with her in the beginning, they form the sweetest office romance K-drama couple after getting together.

More like a motivational K-drama with romance and business subjects, ‘Start-Up’ revolves around an ambitious, energetic, and go-getter woman named Seo Dal-mi who wants to become a huge industrialist of Korea like Steve Jobs. She works hard at part-time jobs and thus has garnered a lot of experience. On the other hand, Nam Do-san is a maths genius and the pride of his family. She mistakes Nam Do-san for her first love, who used to write her letters. However, in reality, it’s Han Ji-pyeong who has been living a successful life thanks to his hard work.

However, when Nam Do-san’s start-up business begins to go downhill, he decides to make use of Dal Mi’s misunderstanding to have her help him fix his failing business. Eager to make her name in the male-dominated industry and with the excitement of working with her old love, Dal Mi agrees to it, which marks the beginning of their office romance.

The drama hits different when you watch it after finishing the 2016 series ‘Goblin,’ which has the same actors playing the roles of Grim Reaper and Sunny. The story revolves around Oh Yoon Seo, an actress known for her exceptional beauty and poor acting who unexpectedly gets into a scandal with a wealthy family’s son. This ruins her image as a celebrity and her career as an actress. Desperate to make a strong comeback, she takes on the character of a lawyer and promises to work under a real attorney named Kwon Jung Rok for a period of three months. Although she takes on the job to sharpen her skills, office romance develops between the two soon.

6. The Secret Life of My Secretary

This is from where the legendary ‘Veronica Park’ meme has come! You might want to gobble up to it immediately if you are a sucker for sweet and fluffy rom-com. The storyline is quite simple, involving a hypercritical perfectionist boss Do Min Ik and an overworked secretary Jung Gal Hee, who is mostly underappreciated. However, Jung Gal Hee is a hot-tempered person who doesn’t hold back in saying the right thing to her mean boss.

However, under all of this, there is a hidden secret. Min Ik suffers from face blindness and mistaken Jung Gal Hee for a popular actress Veronica Park. Instead of clearing the confusion, she starts pretending to be her until one day when the real Veronica Park finds out the truth.

If you love reading books and happen to be a K-drama addict as well, ‘Romance is a Bonus Book’ might be the perfect office romance K-drama for you! It tells the story of a handsome and skilled chief editor of a publishing company, Cha Eun Ho, who is very successful for his age. He comes across his childhood friend and first love, Kang Dan Yi after a long time who is now a divorced single mother. She used to be a popular copywriter once upon a time but is nothing more than an unemployed person desperately in need of a job.

In order to get a job, she lies about her background and ends up being a temporary employee at the same company under Cha Eun Ho. With the passage of time, their boss and employee relationship turn into something more than that as they begin to get involved in each others’ lives often.

When it comes to playing the role of a female lead in an office Romance drama, Park Min Young is a queen! ‘Her Private Life’ portrays her character, Seung Deok Mi, as a die-hard fangirl of a K-pop idol named Cha Si An and has been stanning him since his debut. Moreover, she even runs a fan account under his name and is considered the biggest fangirl of him. However, in reality, no one is aware of this contrasting side of her personality as the world knows her as a professional curator of an art museum who is a workaholic!

After a series of unfortunate events with Ryan Gold, a renowned artist based in New York, she comes to know that he has been appointed as the new director of the museum. Their boss and employee relationship began with constant disagreements as the two found it difficult to get along. However, that’s how most office romance K-dramas are, aren’t they?

While most of the K-dramas on this list come under the light-hearted rom-com genre, ‘Hotel Del Luna’ comes off as a horror mystery office romance K-drama between a human and a supernatural being. Jung Man Wol is a 1300-year-old woman who is neither dead nor alive but has been living a life to serve the dead before they prepare themselves for the afterlife. Because of the sins she had committed a millennium ago, she has been trapped on Earth by the deity. However, although all her hotel employees are ghosts, she needs a human manager to look into the accounts. She chooses Goo Chan Sung, a highly capable manager of a big hotel, for the position.

Although things shock and startle Chan Sung in the beginning as he begins to sew ghosts with his naked eyes, he gradually accepts it after knowing about the hotel and Man Wol more. Although the overall plotline looks quite serious and scary, which of course it is, the drama is more interesting than you might be thinking! While Man Wol looks too beautiful to be a ghost, she is powerful, heartless, and extravagant. Goo Chan Sung begins to bring changes into her as she gradually lets her resentment go.

And of course, our Min Min and Bong Bong! The cutest couple on the list, Ahn Min Hyuk and Do Bong Soon, will never fail to make your heart flutter with excitement! Do Bong Soon is a seemingly ordinary girl with extraordinary Herculean strength that she has inherited from the female line of her ancestors. However, when it comes to intelligence, she seems to have given a large portion of it to her twin brother. She has been crushing over her friend and police detective, Guk Doo, since childhood, who knows her as a delicate girl who needs protection. When Ahn Min Hyuk, the young and unpredictable president of his self-founded gaming company, gets the chance to witness Bong Soon’s power, he gets astonished.

In order to protect himself from the blackmailers who have been threatening him for the last six months, he hires her as his bodyguard. Bong Soon accepts his offer with the thought of being able to develop a game of her own at his company. The show is in talks of having a sequel soon. So in case you have withdrawal issues after completing watching it, you may have something to look forward to.

If you have been in the K-dramaland for a while, you must have already watched the most popular office romance series of all time, ‘What’s Wrong with Secretary Kim’. Nevertheless, we cannot finish this listicle without including this classic! One of the most wholesome and hilarious K-dramas of all time, the series tells the story of the CEO of a company, Lee Young Joon, and his secretary, Kim Mi So, who has been working for him for the last nine years. Although their relationship is strictly professional, Secretary Kim ends up being the only person who can bear with perfectionist Young Joon’s super narcissistic character.

When Kim Mi So decides to quit the job out of the blue, Young Joon tries to figure out various reasons for her action. When none of his schemes works, he proposes to marry her! If you are looking for a drama that is funny and sweet at the same time, with great chemistry between the leads, this might be your call!.