Best K-drama OSTs of 2021 That You Should Watch 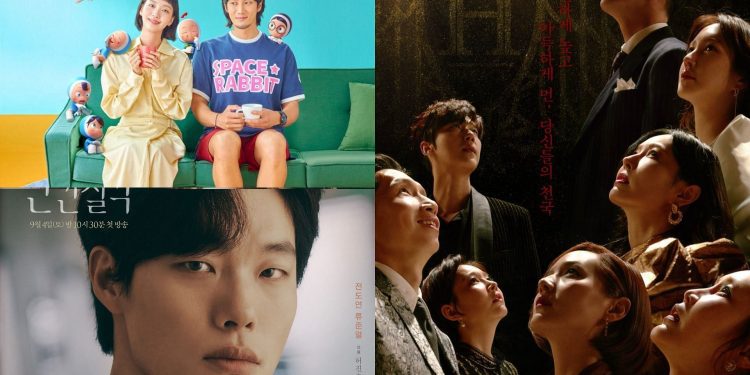 Yes, K-pop is cool, but have you heard the K-drama OSTs? With a story behind the track, the music gets a meaning of its own. With the rise of indie bands in the industry, the quality of K-drama OSTs has been increasing. While we are still not over Itaewon Class’s ‘Sweet Night by V’. A whole new list of beautiful songs has arrived. As the year 2021 has ended with a lot of amazing k-dramas, k-pop debuts, and comebacks. It’s time to shine some light on the beautifully written and sung OSTs of 2021 that have helped us get through the k-drama hangover.

Stumbling upon some OSTs on the internet, you also get to know about a k-drama so underrated that it ends up becoming your little secret. While some of the biggest names in K-pop, like IU, Jin, V, Alexa, released some of the amazing soundtracks, many independent artists got a chance to showcase their talent too. Other than telling the story of the K-drama, the visuals couldn’t tell; these OSTs have played a part in healing from the pain the one has gotten from the relatability. So here are some of the best OSTs of 2021 from the world of K-dramas that can end up becoming a part of your life ahead!

‘True Beauty’ was one of the most anticipated k-dramas of the year. Along with one of the worst second lead syndrome, the k-drama gave us some beautiful soundtracks. But one that stood up the most was ‘It Starts Today’. Sung by Hwang In Yeop, i.e., the second lead himself, the songs are filled with upbeat music. But the words behind the music are painful yet filled with hope. As we all know, Seo Jun did not get the love he deserved in the end and ended up settling as Joo Kyung’s best friend instead. He was there for her when Su Ho left her, and never once did that boy make a move on her.

Proving how good of a best friend he is and how respectful he is towards the girl he loves. Singing ‘It Starts Today,’ Hwang In Yeop tells the story of Seo Jun. About how he met the girl and fell in love with her. And how painful it was for him to see her choose other guy over him. Hearing him sing about that, he will move on to the future. Even though it hurts him and brings tears to his eyes, he will keep going on. Hearing the song brings tears to the eyes as we get reminded of the person, i.e., the one that got away.

‘Jirisan’ became one of the top-rated k-dramas in 2021 as the two forest rangers tried to save people at the Jiri Mountain National Park. ‘Jirisan’s OST ‘Yours’ became one of the most anticipated OSTs when it was announced BTS’s JIN would be the one singing. And as soon as the single dropped out, everybody all over the world was swooning over the lyrics and Jin’s vocal abilities. The song has both Korean and English verses and beautifully presents the emotions of not just Jin but the actors too. Singing about how far away he is from the person he’s supposed to be with. When Jin said, “Every day you seem too far away, every time you do I tell myself I’m waiting here every night I see you in my heart, every time I do end up crying when I call you in the darkness,” every person far away from their loved ones felt that.

‘Rain and You’ (Hospital Playlist 2)

‘Hospital Playlist’ returned with its second season this year. And along with our favorite doctors came some beautiful songs that they covered during the weekend band sessions. One of the OSTs that stand out is ‘Rain and You’. Sung by Lee Mu Jin, the song is a perfect melody to vibe on for one-sided lovers. The song is originally taken from the 2006 movie ‘Radio Star’. The friends gather at Jung Won’s house, and Ik Jun takes the lead covering the song in the very first episode. Even though the English translation doesn’t do justice to the Korean verses, its the only way for us to understand the story. Asking how much the longer the heart is going to ache and how long am I going to cry like a fool.

‘Yumi’s Cells’ is one of the most interesting k-dramas of this year. Showing the insides of Yumi and Woong’s brains as they fall in love and different brain cells make decisions. With one of the most realistic and relatable stories, the OSTs from Yumi’s Cell just hit right at the spot. One of them is ‘Like A Star’ that becomes a warm hug to the lovers all over the world as they finally see each other after a tiring day. Sung by NCT’s Doyoung, the song is simple yet addictive. Telling their lover how precious they are and asking them to be by their side. ‘Like A Star’ is one of the OSTs that makes you keep looking forward to that one person who makes things happy in your life.

No doubt that ‘Nevertheless’ is one of the k-dramas that we have a love hat3 relationship with. Following the story of a relationship with no labels in the world of perfect love stories. Many fans loved ‘Nevertheless’. Talking about the OSTs, they are meant to express the things you feel when going through the same thing. ‘Love Me Like That’ by Sam Kim is one of the best songs from the whole album. The song having all the English expresses the feelings of many Na Bis across the world and even pulls the whole show together. Asking the person you are in love with to Love me like that. Quoting Sam Kim, “You see the world in colors, I view it black and white, Paint me a picture, Out of the lines that I live in all of the time.” is one of the most beautiful verses from the song.

This Christmas, V dropped the OST ‘Christams Tree’ for the k-drama ‘Our Beloved Summer,’ and the fans were speechless. And within days of release, the song entered the Billboard Hot 100. ‘Our Beloved Summer’ brings two former lovers back into each other’s lives decades after high school. The two have a history at school being a part of a viral documentary. Even though the song had both Korean and English verses, even the non-k-pop fans were jamming to the beautiful melody and calming voice on Christmas eve. When V sang, “It’s such a strange thing to do, Sometimes I don’t understand you, But it always brings me back, To where you are.” Everybody felt it deep in their heart, thinking about the person they love the most.

Starting in 2020, ‘Penthouse’ is one of the best and crazy k-dramas of the year 2021. Having two more seasons coming out in 2021, the show had an amazing Opera playlist. Having some of the best instrumental OST, ‘The Penthouse also has the best classical songs in the show. The Penthouse made millions of viewers aware of the amazing opera music.

While they can’t be called the original OSTs, but the show did make the young viewers aware of the masterpieces like Benedict: “Capinera,” Mozart: [Requiem]’ Day of Tears,’ Gastaldon: “The Forbidden Song,” and a lot more. The credit of the beautiful voices goes to the students in the Classical Music department in Seoul National University covered for the characters.

Devil May Cry: Who is Stronger Dante or Vergil?