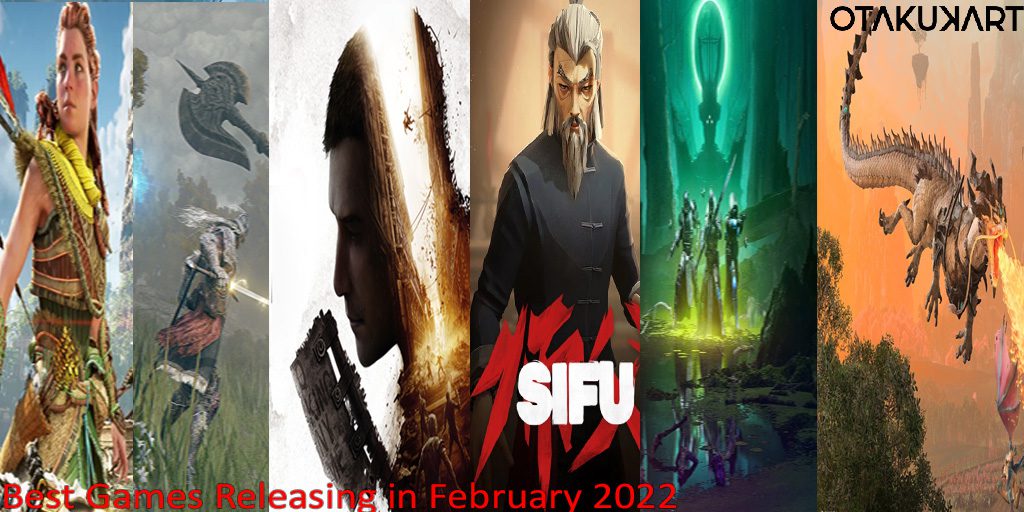 The month of November is the most important part of the year for the games and gamers. November is the month when all types of Triple-A, as well as indie games, launch to the public. And it is so stacked that players do not know what to play and what to wait for. 2021’s November was also like this, where we saw huge stacks of games releasing left and right, like Forza Horizon 5, Halo Infinite Multiplayer, Battlefield 2042, Call of Duty Vanguard, Death’s Door, etc. But for 2022, that stacked month full of the best games is February. Looking more closely, February is much more stacked than we have seen in any November.

In February 2022, so many games are releasing that many other indie and Triple-A games moved the release date to a later part of 2022. In this blog, we will list the best games coming in February 2022, along with their features on why they are the best among the many games coming in the same month. Some honorable mentions of games that did not make it into the list are: Life is Strange Remastered Collection, Crossfire X, Grid Legends, Lost Ark, The King of Fighter 15, and Dynasty Warrior 9 Empire.

Dying Light 2 Stay Human, the sequel to the free-running parkour zombie survival Dying Light, has to be on this list. The game will release on PlayStation 4, PlayStation 5, Xbox Series X/S, Xbox One, PC, and Nintendo Switch.

The sequel will have better and more parkour animation than its predecessor. Techland has said that Dying Light 2 has over 3000 parkour animations for better enjoyment of the free-running experience. Unlike the predecessor, which had the guns, Dying Light 2 is purely melee-based. The zombies will act as the prequel when in sunlight they are slow, but in the night, they are much more violent and dangerous. The map is much bigger than the first, with almost four times as big as in the last game.

The Developers have said that the players will need to spend 500 plus hours to fully complete Dying Light 2. Dying Light 2 is up for pre-order and has three editions.

The third and the finale in Warhammer Trilogy Saga is upon the players. Total War: Warhammer III is the upcoming real-time strategy and turn-based video game in the Warhammer franchise of Games Workshop.

Warhammer III will have the same features as its predecessor, where the players move their armies on the battlefield. The campaign map of Warhammer III is twice as big as the Warhammer II. The developers have listened to Warhammer fans’ requests and have adjusted and improved the third game. The players will fight against AI-controlled demon opponents. The game is set to take place inside the Realm of Chaos, which is the source of the Magic in Warhammer franchise. Creative Assembly has said that the game will have a more playable faction.

Warhammer III will bring a new mode called Survival mode. The Survival mode will put the player’s faction inside a demon realm, where they have to progress through the victory points and capture them. The players will have to use the resources of the enemies to survive. Warhammer III is up for pre-orders.

The next game on this list is an action-adventure beat-em-up third-person perspective game called Sifu. As the genre said, the player will control a kung-fu student and go on a quest to beat the living hell out of his enemies and defeat them.

The developers explain the game as a kung fu student on a quest in a modern Chinese city for revenge against five assassins who killed his family brutally. The game will have a revive type of system, where the protagonist possesses a Magical Talisman that will revive him, but he will get older after every revival. After every revival from the Talisman, protagonists’ attacks will be more devastating, with less health. Once the Magical Talisman’s magic is exhausted, he will die.

Sifu has many unique and different combat features. The game will sometimes have a dialogue option to avoid any unnecessary battles. Sifu is up for pre-order and has two editions:

Sifu will release on 8 February 2022 worldwide.

Also Read: What To Expect From Apex Legends Season 12?

The Witch Queen is something that the fans have been waiting for a long time. It is the sixth expansion for Destiny 2 and will release on PlayStation 4, PlayStation 5, Xbox Series X/S, Xbox One, and PC.

The Witch Queen will focus on Savathun, in the Realm of Ascendant. She is the sister of Oryx, also called The Taken King, and Xivu Arath, also known as God of War. She, unlike her siblings, uses trickery and Subterfuge. The expansion will bring in two new dungeons and a new weapon called Glaive. The players can use Glaive for short-range attacks, melee attacks, and defensively as well. The players can freely and fully customize this weapon. Many new changes are coming, which many have requested from the developers.

Destiny 2: The Witch Queen is up for pre-order and will release on 22 February 2022 worldwide.

Elden Ring is the newest game in the Souls-Borne genre from the famous developers From Software. Players can again enjoy engaging themselves in a game that will frustrate them to their bone. Elden Ring will release on PlayStation 4, PlayStation 5, Xbox Series X/S, Xbox One, and PC.

Elden Ring’s writers are Hidetaka Miyazaki and George RR Martin, the author of the famous epic fantasy series A Song of Ice and Fire. The first announcement of Elden Ring was back in 2019 during the E3 2019, and nothing else dropped after that until the first gameplay trailer came in Summer Game Fest in June 2021. The game is set in a fictional realm called the Realm of the Lands Between. The players have to defeat all the offspring of Queen Marika the Eternal, who possess a shard of Elden Ring, which grants them the power but corrupts and taints them. After defeating and collecting all the shards from the offspring, the players will restore the Elden Ring and become the Elden Lord.

Elden Ring, unlike the Souls series, will have an open-world environment. The game combat will be the same as the previous Souls series, like calculated attacks, parry, etc. According to Miyazaki, the game will have rich character customization and will heavily focus on the exploration of the skills instead of the skill tree. Many new features will come in the Elden Ring, like Summoning, where the players can summon spirits along with previously defeated foes as their allies. Elden Ring will easily be one one of the best games to come out in February 2022.

Elden ring is up for pre-order and is available in five different editions.

Everybody knows that Horizon Forbidden West is one game that, before its release, will be on everyone’s most anticipated and waited-for game list. The sequel to 2017’s Horizon Zero Dawn, which almost everyone loved. The game will release only on Sony’s PlayStation 4, and PlayStation 5.

The developers have said that the Forbidden West is developed on the latest and updated version of Decima. The combat in the game will be much more versatile and improved. One of the best things coming in the Forbidden West is Underwater Exploration, which, after the gameplay reveal, was much awed at and liked. The gameplay reveal showed the revamped traversal and climbing mechanics, along with many new mechanics like Diving Masks, Pullcasters, Shieldwing, etc.

The game is up for pre-order and is available in three different editions: