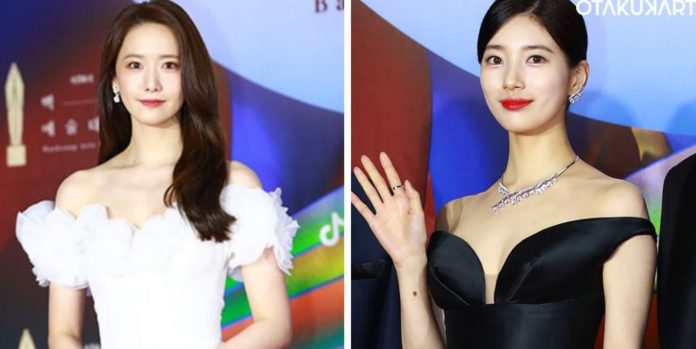 The 58th Baeksang Arts Awards is here with another star-studded lineup of Korean celebrities as well as an amazing batch of dress ideas to steal from. This year’s Baeksang Arts Awards was held on May 6 at Kintex, Insanseo-gu, Gyeonggi Province, and started at 7: 45 PM KST. The event was hosted by Shin Dong Yup, Bae Suzy, and Park Bo Gum. Moreover, the whole ceremony was broadcasted on JTBC in South Korea and on Tiktok internationally. The Baeksang Arts Awards is one of the most prestigious award ceremonies that recognizes film, television, and theatre. So you can see why South Korean film industry’s fans all around the world wit for this event.

The grand prize, the Daesung, was bagged by the director of Escape from Mogadishu Ryoo Seung Wan, in the film division and by the director of Netflix’s hit Squid Game Hwang Dong Hyuk, in the drama division. The films that were awarded the most were Escape from Mogadishu and Kingmaker , with three awards each. And in the television division, Jung Hae In’s D.P had unsurprisingly won the most wins with also three awards. While Lee Jun Ho, nominated for The Red Sleeve Cuff, and Kim Tae Ri, nominated for Twenty-five Twenty-one, became the most awarded actor and actress of the night. The 58th Baeksang Awards was truly filled with stars who had stolen the audience’s hearts this year, but it’s time so who won the best dress this year!

Kim Tae Ri dissed a normal gown and opted for a beautiful dress combined with a crop top and a beautiful gown-like skirt at the 58th Baeksang Arts Awards. The actress had won many awards that night, such as Best Actress – Television and Most Popular Actress for the K-drama Twenty-five Twenty-one. She and Nam Joo Hyuk had garnered so many hearts with this K-drama of theirs.

This list would not have been complete without the stunning actress Bae Suzy. Bae Suzy has gone viral for her singing abilities, acting skills, and of course, her unreal looks. She had attended the ceremony of the 58th Baeksang Arts Awards in a black dress with a low-heart-shaped neckline. The bun added to Suzy’s radiating elegance!

Next up is the visual of the 2nd Generation of K-pop, Lim Yoo Ah. YoonA chose a simple yet pretty white gown with a frill on top. The actress was nominated for Best Actress in a film for Miracle: Letters To The President as Song Ra Hee.

Another Girls’ Generations member that amazed us on the red carpet of the 58th Baeksang Arts awards with her awesome dress was none other than Seohyun. She was nominated for the Best New Actress In A Film for Love & Leashes, where she played the role of Jung Ji Woo.

Jung Ho Yeon is a new actress on the scene who has already made it big only with one K-drama. She styled a dress, which pretty much made her look like a doll, with a pair of touring boots. Jung Ho Yeon surely knows how to rock the red carpet! She was nominated for the Best New Actress- Television for Squid Game, where she acted as Kang Sae Byeok. Jung Ho Yeon keeps impressing us whether she is in a k-drama or not!

Choi Hyun dressed in a traditional yet glamorous black dress with a slot for the 58th Baeksang Arts Awards. Choi Yi Hyun was nominated for the Best New Actress-television for the Netflix K-drama All Of Us Are Dead, where she played the role of Choi Nam Ra. She surely made a very strong impression on K-drama fans with her work!

Kim So Yeon had not failed to impress us yet again with a black dress. No one can make an ordinary black slit dress look so splendid as Kim So Yeon does! She had attended the award ceremony as a presenter for the Best Actress- Television Award.