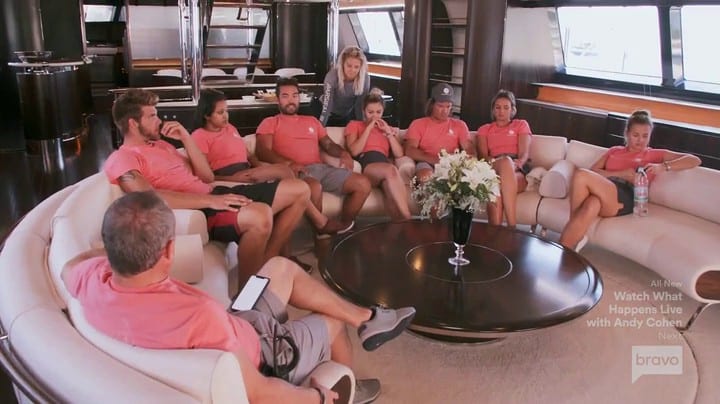 From Below Deck Sailing Yacht S02E15

Below Deck Sailing Yacht S02 Episode 16 will close the show with Parsifal Charter on its last and most difficult mission ever. Yes, another charter will be the guests. The thing is they all are afraid of what their reactions and notations would be when Parsifal Charter serves them. But from the looks of what final moments of the previous episode teased, it seems like they will be doing fine. In fact, they will be mingling way well then we could imagine. Thus leaving Captain Glenn to worry if his team is going all out with the entertainment. Thus forgetting their motive to end the show on a professional note.

Apart from the final tasks, Below Deck Sailing Yacht might take a look at the fallen and rising relationships. The previous episode was like a love letter of JL and Dani’s relationships. They had so many cute beautiful moments expressing love for each other. At the same time, Gary and Alli’s relationship fell when Gary crossed over to flirt with Sydney. This led to a showdown, with Alli breaking it down all over both of them. Although it was sorted in the end what it means for the relationship. Let’s break down the episode piece by piece.

Previously on Below Deck Sailing Yacht Season 2, we saw Gary making some really bad moves. While Jean-Luc gets his relationship right with Dani, Gary runs his own. Despite having hearts for Alli and on break, Gary starts flirting with Sydney. She flirts back and takes it to another level. There comes a time when Sydney drops in the pool topless on Daisy’s approval. But with Gary right in front of them, it doesn’t fit right with Alli. She goes in to confront him as well as Sydney at the same time for a big fallout.

The next day sees Captain booking into work on the yacht once the season is finished. As Alli, Gary and Sydney settle down with what happened last night, they began their work before the yacht leaves. Gary later apologizes to Ali as they get back to work. Gary is given a great opportunity as a first officer, and he doesn’t look back to prove. The new guests are arriving, and they have a lot of things in their minds for the Yacht.

Colin plans to end the season on a professional note. So he calls in the heads and informs them to take care of their departments. So the crew are on time and waiting for the guests to come. But bad news comes in stating the group joining them has tested positive. So the good news is a second group may arrive the next day. Thus, the crew moves on with their work.

While this goes on JL organizes a tender ride for Dani with a little help. Watching JL and Dani makes Gary and Alli rethink them. As JL brings Dani back, the Yacht is romantically set up. They have a great night talking about their relationship ending up walking over Glenn. The next day sees the new charter coming in. Check out a glimpse from the previous episode of Below Deck Sailing Yacht.

Below Deck Sailing Yacht Season 2 Episode 16 is titled the “Last Call for Parsifal!”. The official synopsis for the episode, as well as the previous episode’s ending, teased the charter coming in. Something our Parsifal crew really hates to serve as they are nervous. After all, they will be judged by someone from their own league. While the guests will be drunk enough, Captain Glenn will have a keen eye on his crew as well. How long can he let his crew enjoy the new charters? How far can it go? All in Below Deck Sailing Yacht Season 2 finale.