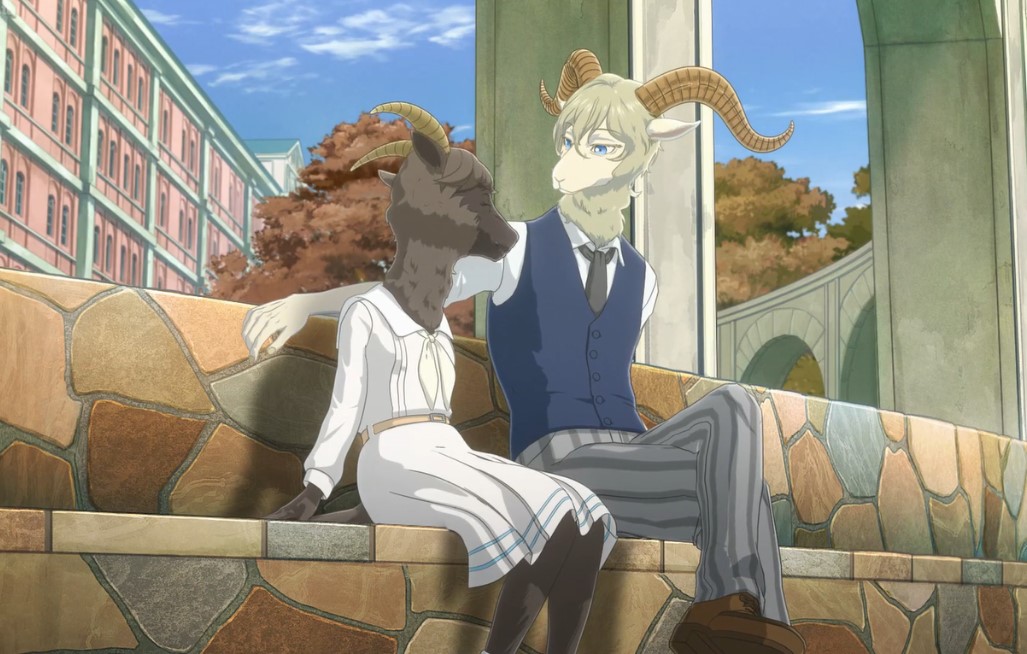 Legosi has managed to escape the Leo Group and left Loius with the truth. He is wondering if he can tell the truth to the club about Louis. In the morning, Riz and his bear friend enjoy eating tomatoes. They both dig in, and Riz realizes that he ate Tem on his consent. He thinks that he is beginning to lose his taste. But he is glad that he made befriend herbivores. Riz cannot forget his friendship with Tem and his flavor. Beastars Season 2 below.

He thinks that eating is the celebration of life, and when Tem enters his mouth, he was smiling. Riz realizes that Legosi won’t let him alive for eating Tem. For Tem’s sake, Legosi promised that he would crush Riz. Riz saw tomato paste on his fingers and realizes that it looks like Tem’s blood. He thinks that he has to silence the wolf and sheep. Riz is planing to kill Legosi and Pina. The other bears enjoy eating while he is thinking.

Beastars Season 2 Episode 11 will release on Thursday, 18 March 2021, at 12:55 AM, officially on Netflix. Beastars will be available every Thursday. Take a look at the following details and preview.

Legosi is at school thinking about Haru and Louis. He is worried about how he has to deal with Riz. He cannot stop himself from falling for Haru, and he wonders why. Haru appears, and she told him that he is touching her hand. Legosi realizes that he was romancing Haru without knowing it. He pulls his hand back and talks with Haru.

Haru asks Legosi if he is done with classes, and she wants to talk with him. The guys inside the class gather nearby. They think that Haru is about to propose and Legosi shoosh them. The two went outside so that they can talk properly. When they are outside, Haru realizes that there is a huge difference between Louis and Legosi. 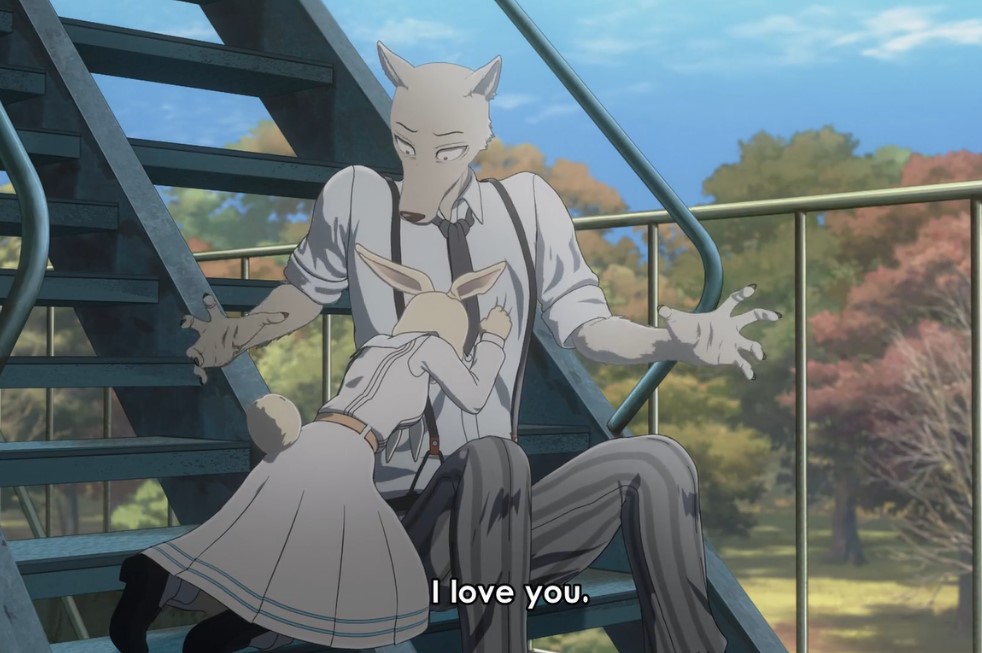 Haru told Legosi that she like him, she loves him, and she embraces him. Legosi is stunned, and he thanks her. Legosi is glad that it is the first time Hrau is confessing her feelings. He realizes that those guys saw this coming. She hugs Legosi tight, and his tail wiggles. Haru said Legosi is strong, kind, and reliable. The more she falls in love with Legosi, she worries about Louis. Legosi looks at Haru since she mentions Louis.

Haru said it is not what he is thinking, and she is done with Louis. She reveals that she is not in love with Louis. But she is just worried about him as he is one of them. He never calls or answers her calls. Legosi promise that he will make her happy no matter what. He realizes that he has first to solve every problem and then focus on embracing Haru. Meanwhile, Pina is embracing his girlfriend near the school entrance.

Pina told Leona that he is playing a part in life to die like a Hero. The girl steps on Pina. She is angry that he is calling her Leona. The girl said a guy who can’t remember the girl’s name is not even with a funeral.  The girls left Pina alone, and he heads to the restroom. Pina realizes that he has messed up again with another girl. He thinks that he has to put more effort into his playboy skills.

Riz arrives and scares Pina, who thinks that he is dead meat. Riz told Pina to stop getting involved with Legosi. Pina asks why and Riz replies as long as they leave him alone, he promised to live a peaceful life with Tem’s memory in his heart. But if they are defiling his friendship with Tem, he will have no choice but to eat them. Pina tries to act brave and said his horn wouldn’t allow that. Riz grabs Pina’s fingers and puts them in his mouth.

He let go of Pina and told him that he couldn’t stop since they smell like honey. Pina looks at his finger and finds that they are still there. He thought that Riz ate one of his fingers. Pina realizes that Riz was licking his finger. Riz left Pina lying on the floor. Later they attend a club, and Pina stares at Riz and starts to tell a poem. 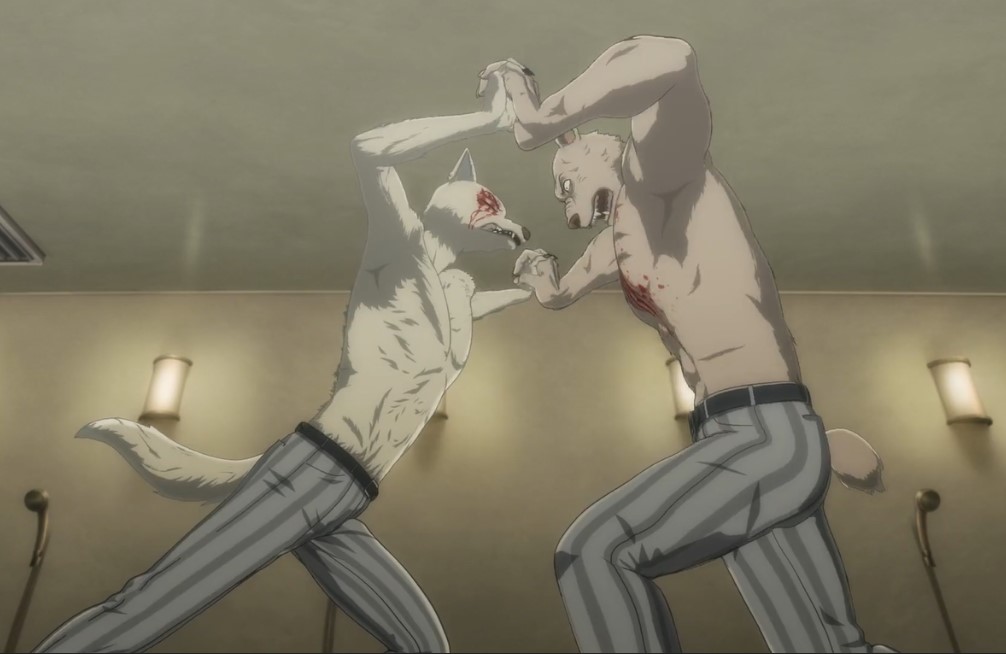 Pina said, ”If I were to beg for my life, would that satisfy you gods of death.” My life may be worth less than nothing, but my life is me alone.” My fear of dying is also min alone; if you want to kill me, you can.” Other herbivores who were listening comments that Pina still members his lines. Juno is wondering what has happened to Pina. Ibuki gives Free a gun to shoot him if he trie to eat Boss Louis one day.

Pina and Legosi laid a trap for Riz, but it failed. Riz asks Legosi if he thinks he can beat him, and they fought a bloody battle. They stopped when they hear the lady’s voice and help each other clean the blood and the damage they have caused. But Legosi can’t get over it; he starts another battle with Riz. The lady came back, and Legosi said they would settle this on New Year’s Eve.

Riz said he would settle this once and for all as a fellow carnivore. Later Legosi told Gouhin about the battle. He reveals that it is not like he wants to kill Riz; he wants to face him. But Riz has thrashed him today, and he has no chance of winning. Legosi said he wants to get strong before New Year’s Eve.