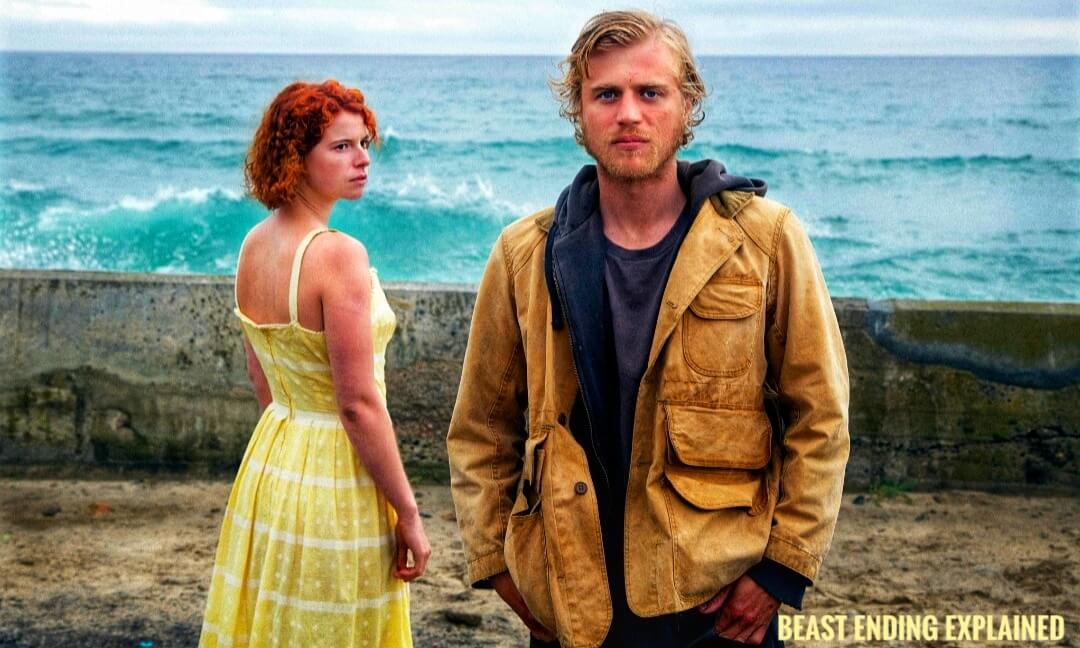 The ending of the 2017 “Beast” befuddles many with its ambiguity amidst a chaotic conclusion. Written and directed by Michael Pearce, the psychological thriller is a slow unraveling until it isn’t. The film stars Jessie Buckley as Moll, a 27-year-old tour guide in the Channel Island of Jersey. She also looks after her father with dementia and babysits her niece. Johnny Flynn stars opposite Buckley as Pascal Rebouf, the charming hunk who Moll falls for. Geraldine James stars as Moll’s cold and controlling mother Hilary.

The plot revolves around Moll as she falls in love with the charming poacher, Pascal. Meanwhile, the island is shaken up from recent series of gruesome killings. When Pascal becomes a main suspect in the killings, Moll defends him. However, as the story progresses, darkness unravels, and secrets surface, putting both Pascal and Moll under an ambiguous light of suspicion. Who is the real killer? The big question is met with a purposeful and exciting denouement that keeps the answer a mystery.

Let’s now try to solve the mystery and the head-scratching ending of “Beast”. Spoilers ahead!

At its core, “Beast” is about controlling chaos and the perils that present themselves when the leash finally breaks. Moll is our guide through this psychological thriller and her narrative reliability only decreases as the story unfolds with twists, turns, and shocking reveals. A seemingly repressed girl, Moll turns into the titular savage by the end of the film. This drastic transformation significantly contributes to the ambiguity the ending of “Beast” leaves us with. With Moll’s spiral into becoming this feral creature by the end of the film, the truth becomes increasingly murkier.

Major details from her past begin unraveling, changing the audience’s view of Moll as a protagonist. We learn that she harbors some drastically violent secret from the past. These details also help contextualize the extreme controlling nature of her mother. At the start of the film, we learn that Moll’s mother is a control freak. Her mother’s control doesn’t just appear to be a case of overprotection. It seems to be a case of a zookeeper keeping an animal, a “beast”, subdued. However, we don’t know or understand the reason behind this level of cruel and terrifying control. As the film progresses towards its end, although not empathizing with the mother, we understand fully well the reason for her extreme parenting.

Beast Ending Explained — Case for Pascal Being the Killer

Pascal being the killer seems to be the most obvious answer here. From early signs to his wild, illegal-arms-carrying, suspicious nature, Pascal seems to be the biggest suspect. Even the whole island believes him to be the killer. Detective Clifford keeps warning her to stay away from Pascal. Pascal’s charm and affectionate behavior make Moll fall for him hook, line and sinker. He’s the only one who gives her attention and also saves her from a creep trying to force himself on her. These acts attract Moll, a person starving for love and tender protection, to him. However, there’s an off-putting, suspicious vibe to his charm. Plus, this is a rather old trope where the charming and mysterious young man turns out to be a cold killer.

Then there’s Pascal’s criminal record. Detective Clifford informs Moll that Pascal was a convict in a sexual assault case against a 14-year-old. Also, he was the main suspect in one of the recent murders that are taking place on the island. Moll eventually confronts him about it, to which he says that he had consensual sex with the girl. Regardless, it still counts as a sexual assault since the victim was a minor. This doesn’t exactly paint him as an innocent guy.

However, later on, is when we get the seemingly dead giveaway to his truth. At the restaurant near the very ending of “Beast”, Moll coaxes his confession out of him. Saying she loves him regardless of what he might have done, Moll shares her own secret regarding the stabbing incident. Finally, he reluctantly says, “It’s over. They were nothing to me”. This seals the deal for many that he was indeed the”beast”.

The ending of “Beast” sees the two lovers driving away in the car. Moll asks Pascal for a kiss but when he leans in, she unbuckles his seatbelt and swerves the car out of control. Pascal suffers injuries but still survives. He begs Moll to help him, claiming that they both are like each other. Moll doesn’t buy that since she wants to rid of all the pent-up guilt herself (more on this later). So there you go, these are the most obvious reasons why Pascal was the killer. Let’s now delve into why the protagonist of the film — Moll herself — might be the killer.

We learn by the end of the film that Moll suffers heavily from her harsh upbringing. From her extremely protective and controlling mother to her spotlight-hogging sister, her family isn’t the kindest to her. Adding to the issues is her father who has succumbed to dementia. With no one she can really rely on for love and affection, she plunges into her feelings for Pascal. However, all the years of repressed emotions and a suffocating household must have taken a toll on her.

This toll has likely done a number on her psyche to the point she has developed psychopathic tendencies. It’s not out of the realms of possibility to suggest that her history with her family and her genetic predisposition to mental disorders (her father being a dementia patient) has actually pushed her into doing extreme acts of violence that she doesn’t have a memory of afterward.

Later in the film, we learn that Moll has a dark past that she shares with Pascal. Initially, she tells him about this girl in her school that she stabbed with scissors. She tells him that she did it in self-defense. However, later on, she reveals that she actually stabbed the girl to exact revenge. Throughout the movie, we see chaotic clues that point to her being the killer. Moll keeps on having these nightmares where she kills all the victims. These nightmares don’t really look like nightmares when you factor in the fact that she keeps waking up to an open sliding door in the middle of the night. This might be a clear giveaway to Moll frequently venturing into the night and killing girls.

The nightmares she has could be her way of repressing her memories of her murders. This also explains why her mother is the way she is towards her. Ever since her violent breakout at school, her mother has been trying to save her from the darkness. Although, it could also be argued that her controlling nature is what has made Moll reach this psychic collapse where she strives to find her freedom in these killings. These killings could be her twisted way of coping with what transpired in school. Each killing is her unintentional recreation of the stabbing incident, and after each killing, she represses that memory. We also notice that she continually insists on her stabbing of the girl as a self-defense act.

Considering all this, it makes sense why she is the killer who keeps killing girls that are all of a similar age as Moll was when she stabbed the girl in her school. She doesn’t want to accept that she killed those girls just like she doesn’t want to admit she stabbed that girl out of spite. Moll still feels tremendous guilt for that incident. Her mother’s treatment has just made her guilt irreversibly worse. Pascal’s admission of killing may just be him telling her what she needs to hear. Her progressive transformation into the “beast” is probably her mental illness getting worse. Her mother and Pascal, as per this theory, are just trying to save Moll. The ending of “Beast” sees Moll Killing Pascal,

So Who is the Real Killer — An Ambiguous End

There is no conclusive answer to the question. Both Moll and Pascal are likely to be the killer. Conversely, it could also be that none of them are. Pascal does have a history of sexual assault and carrying suspicion for recent murders. There’s also the fact that the victims were raped before being killed, which makes it less likely for Moll to be the killer since it’s difficult to imagine that she’d do that. However, that’s an inconclusive amount of evidence to incriminate him. Detective Clifford later informs Moll that they’ve arrested the real perpetrator — an immigrant farmer. That could be the actual killer. However, the history that Pascal has and the fact that he was not at the party the night he and Moll met, paint him as a top contender for the crime.

In the ending of “Beast”, he does kind of admit to murders but it was under heavy intoxication and he says it rather reluctantly. It’s ambiguous really, much like the nature of Moll is. She could also be the killer but also not the one after all. Her nightmares could just be a product of her difficult upbringing. She carries trauma and a lifetime of difficult experiences with her family. This might be the reason why she keeps having nightmares and also sleepwalks. Her weird fantasizing about killing might be her way of relating to a victim of abuse, like she is, of her mother’s constant control. It’s all still theory and speculations, with no definitive resolution to the ambiguous ending of Beast. One might argue, it’s way better this way.

Also Read: I Know What You Did Last Summer Series Ending Explained