Bbno$ rarely shares about his personal or love life. But, the rapper has been in a relationship since one year. 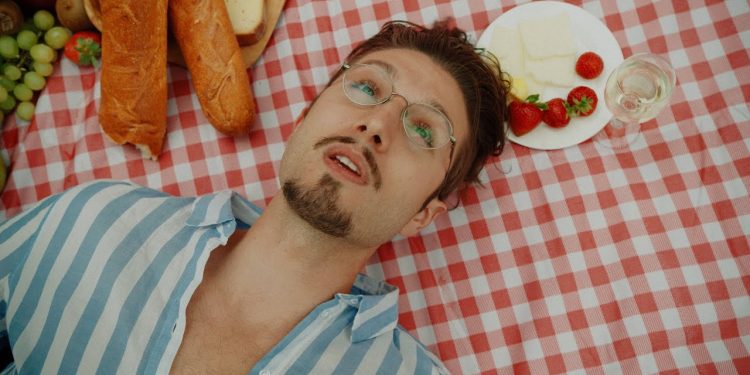 Rapper Bbno$ in one of his music video

BBno$ has always been low key about his dating life. However, the Canadian rapper does have a girlfriend. His social media accounts very much prove how much he is in love with his girlfriend. So, who is BBno$’s girlfriend? Today, we are providing you with a little bit of insight into the rapper’s love life. Bbno$ full name is Alexander Leon Gumuchian. In fact, Bbno$ is also short for baby no money and often pronounced as the same. Initially, he wanted to be a professional swimmer. But, he could not do so due to a back injury. Later on, he pursued his career in music and has been active since 2015.

The Candian rapper often shares his moments with his girlfriend on the Twitter account. Meanwhile, his girlfriend does so on her Instagram account. They also completed their one year of togetherness in the summer of this year. The pair went camping for celebrating their anniversary. She also sometimes appears in his video, which he posts on his own website. There is not much information as to where or how he met his girlfriend. But, yes, the pair is social media official about their relationship. Other than that, there are no previous rumours of Bbno$ dating anyone.

Also Read: Who is Bader Shammas’ Partner? All About the Financer’s Love Life

Bbno$’s girlfriend is Haley Kai Dawe. She is an owner of a perfume retail store which is in Vancouver Island. The perfumes are all-natural, synthetic-free, vegan, and handcrafted. In fact, a portion of their sales is donated to Ancient Forest Alliance. Sometimes, she is also seen in videos of Bbno$. Well, the couple had not officially stated about their relationship. But, they are almost social media official, and their accounts pretty much give hints how the couple is very much in love. Furthermore, the couple is keeping their dating life very private. They rarely reveal their love life to anyone or in public. But, they upload photos with each other on their social media accounts.

Bbno$ Came Into a Relationship in 2020

BBno$ had not spoken when he came into a relationship or anything about his girlfriend. However, his girlfriend, Haley, time and again shares photos of them on Instagram and Twitter. She shared several photos with BBno$ on 3rd July 2021 and captioned the post as, “365 days, ily” with love feelings. Thus, it could mean that the pair come into a relationship in July of 2020 and completed their one year of togetherness this July. Furthermore, her posts suggest that the pair went in camping somewhere for celebrating their first anniversary.

Haley shared her first photo with Bbno$ on Instagram on March 20 of this year. The pair seem very lovey-dovey in the photos. She captioned the post as, “Photo Dump of Pure Love.” Haley went on and added Corney in the caption and asked the people to watch the music video. The couple was also seen vacationing together in Malibu on June 01, 2021. BBno$’s girlfriend also uploaded pictures of his birthday together on July 02 during the summers of this year. Her most recent post with BBno$ was on November 15, wherein the pair is in Phoenix. They are seen spending time together and having an outing with some of their other friends.

Bbno$ is occasionally seen sharing photos with his girlfriend on Twitter. One of his Twitter accounts, bbnogames, posted a photo on February 01, 2021. He captioned the photo as,” jk I love her.” In the photo, bbno$ is seen dawning a pink colour pullover. He is taking a selfie while his girlfriend is pouting and posing for the photo with a coffee mug in her hand. Kai also commented on the picture. She swore in the comment that she did not force him to tweet the post.

Furthermore, she also commented two more times in the picture. In one of the comments, she said ily with a love smiley. On the other hand, she commented yes when one user commented that she is so lucky. Later on, she also retweeted the same post. Bbno$ also tweeted a post of his girlfriend on March 9 and captioned it that his girlfriend is S tier. Meanwhile, his girlfriend also retweets his post sometimes along with sharing some of her own in her Twitter account.