The BL drama Bad Buddy showcased yet another touching moment as the characters Pran and Pat are being honest about their feelings for each other. 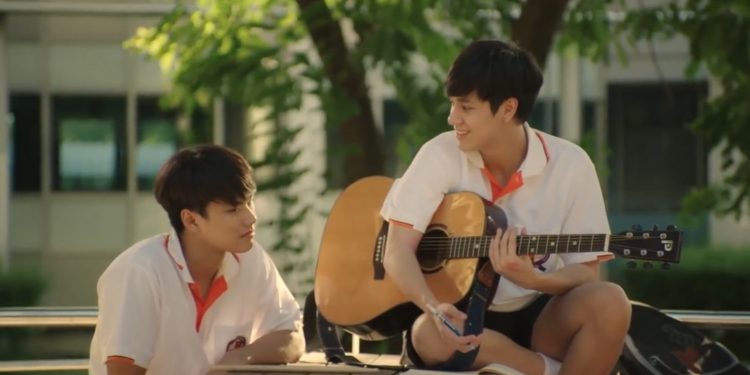 “If we’re not enemies, do you think we can be friends”? Well, this is one of the most trending lines from the recent Bad Buddy episode. Fans of the BL drama are elated after the recent episode and waiting for an entire week for another episode seems like a lifetime to them. Don’t worry, we’ve got you covered as this article will focus on the Bad Buddy Episode 6 release date, streaming details, and what more heartwarming moments Pran and Pat will offer us in the forthcoming episodes.

In the previous episode, we got a glimpse of how Pran felt a tint of jealousy whenever Ink was around Pat. The emotions suppressed for so long were finally coming out. Meanwhile, Pat was also contemplating what is that he was feeling? However, is Ink going to be the love of Pat’s life or she’s just a bridge to make these star-crossed lovers realize their fate? Whatever the reason may be, we will witness that, and to make it even more rewarding, Nanon and Ohm’s moving acting is there to make us swoon all over.

Also Read: ‘Her Private Life’ Kdrama: Cast Updates And Where To Watch

When Will Bad Buddy Episode 6 Release?

Bad Buddy Episode 6 will release on 3rd December 2021. The splendid chemistry between Pat and Pran is so amazing, that it deserves a separate appreciation post. Both of them felt for each other for the longest time, however, circumstances were not in their favor. Or maybe they didn’t know how with time they just fell for each other. The drama has a total of 12 episodes. It is one of the standardized episode numbers in a Thai drama. The BL drama started airing on 29th October and if everything goes accordingly then it will end its journey on 14th January 2022.

The drama gets telecasted every Friday on its original network, GMM 25. Each episode has a duration of 45-50 minutes long. However, the kind the gripping storyline the drama has, 45 minutes seems way too less. For the international audience, the drama is available on the WeTv app. Apart from this, they can also view the drama on the YouTube channel with the name GMMTV OFFICIAL.

The previous episode gave us a clear indication that finally both Pran and Pat have realized their fondness towards each other. In Episode 5, it is shown that though confused, Pat still took a chance and went out with Ink. Pat tried everything his sister told him to do in order to understand if someone is truly interested in one or not. However, it didn’t work with Ink. At the same place, Pat met Pran, where both of them touched the same guitar and that was the moment when Pat felt something. Something which made him think whether he truly felt for Pran or not.

At the festival, the Architecture team played the song which once was composed by Pran and Pat. Pat realized that he wanted Pran to play that only with him and not anybody else.

This scene made all the Bad Buddy fans fall in love with Pran and Pat all over again. Both Pran and Pat’s heart knows what their mind doesn’t. That’s why when Pran played that song at the festival, for Pat it brought back all the memories. Memories of them being together and making music. When maybe both were oblivious of each other’s affection but one thing was for sure; their presence only was enough to make each other happy.

After Team Architecture won the competition, they coincidentally met Team Engineering at the same place. However, what Pat was feeling had nothing to do with the results. It was something completely different.

Later, a drunk Pat waited outside their apartment for Pran to return. Pat tried to splurge out everything he felt for Pran in front of Wai, but Pran somehow managed the situation.

Pran went to meet Pat in his room only to know that he was on the roof. Here, the array of emotions that were portrayed by both the actors is just sheer brilliance. Pran, with his longing for Pat and knowing that they can never be together due to his family circumstances and Pat, wanting desperately to tell Pran how much he meant to him, all those feelings came down to a kiss which was one of the best moments that Episode 5 of Bad Buddy could have offered us.

The rooftop scene reflected everything the characters felt. For Pran, he was afraid, afraid that his family won’t accept this, not even his friends, however, a sense of happiness was there as he knew that finally, his heart belonged to Pat. As for Pat, he ultimately got to know for whom his heart truly beats.

This episode had one of the most anticipated endings and we, just like you can’t wait for the upcoming episodes.

Though both Pran and Pat know that their love story has a tough road ahead, much because of their family history, still they want to give it a shot. One thing is for sure that in the upcoming episodes we will get to witness Pran and Pat’s moments more and this time it will not be in a passive way. Till then, you can reminiscence the moments by binge-watching the series yet again.