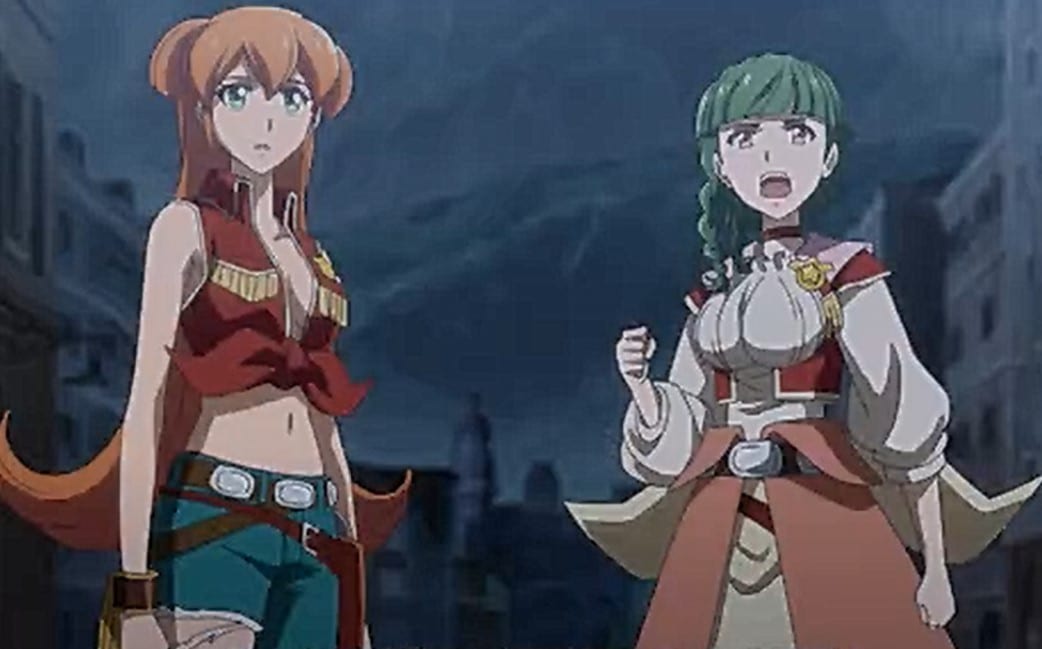 The high-ups have found that Supreme Rudolph was the mastermind behind the riots in Lutoh. To protect Edger villagers, Doctor Sola sacrificed his life. Atlee managed to save Fine from those pursuing her by declaring their dreadnought an independent nation. Two months have now passed after the great war and the incidents that happened in Lutoh. At Caravan Road Neutral Zone, Shuu, Arrow, Atlee, and Eisha are with the villagers inside their ship. Eisha wonders why there is no news about the next Rakuho.

She asks Shu why this is happening, and Shu comments that it takes time for another Rakuho to fall. Arrow comments that Shu must know since he is an expert in this. Shuu said that Rekka would feel naked if they don’t have bind warpers. Eisha reveals that they have received an official letter from Lutoh. Princess Fine is staying with Arrow crew, waiting for the villagers’ anger to subside. She joined the conservation and said Sovereign Peath finally agree to attend the signing ceremony.

Previously on Back Arrow Episode 16

Arrow is glad that there is peace at Rekka and Luto now since their alliance bond is strengthened. Bitt is glad that his village and its villagers will be officially independent. Shuu realizes that they are celebrating, and they forget about him and Princess Fine. He reminds them to thank him and Princess Fine since they are the ones who handle the negotiation. The two risked their lives to save the citizen’s life and the falling kingdom through negotiation.

But Arrow and the rest of the crew played an important role during the battle even though they have lost one of the comrades, Doctor Solo. Eisha thanks Shuu since she has realized that he wants their attention. Princess Fine is excited that Arrow and the crew helped her realize that it will open new paths if she keeps moving forward. She said that she is ready to find her path, and this is her first step.
Commander Prax arrives and apologizes to the crew for making them wait.

Bitt looks behind, and she was stunned to see a well-dressed queen behind him. Prax reveals that she presents the Granedger United’s Queen, Atlee Ariel. They crowned her a queen, and everyone is happy for her. Atlee asks them what they think about her ceremony dress. Eisha comments that it looks lovely on her, and Bitt drops his spoon, witnessing Atlee’s new beauty version. Shuu comments that Bitt must not comment anything since his looks tell them all.

Atlee wonders if she deserves to be the queen, and she asks everyone about it. Fines told her not to be afraid, and she deserves more than that. Arrow comments that Atlee must be confident, and she must not forget this started because of her. Atlee realizes that she has told the high-ups that their country is Granedger and an independent nation. That day Peath receives a call telling him to leave the girl and withdraw. Peath told his warriors to fall back, and his partner asks him why.

He told his partner that Supreme Rudolph ordered him to do that, and they can’t go against the Supreme. In the present, Rudolph is with Douzosa talking about the Republic of Rekka, Supremacy of Lutoh, and Granedger. He reveals that the more powers there are, the more seeds of war. Rudolph transforms from his muscles version form and turns back to his old chubby form. He comments spread war in the lands; that is god’s will.

Meanwhile, Arrow and his crew begin farming, and he told them that they could raise livestock and farm. Shuu helped the villagers by controlling the water and climate crops will grow well. Later they throw a banquet, and the pretty boys declared independence from lord Walston. After the ceremony, Arrow and Shuu visited Kai, who asks Shuu why he came even though it is dangerous. Shuu replies that they came because they need land.

Back Arrow Episode 17 Release Date & Where To Watch

Back Arrow Episode 17 will release on Saturday, 1 May 2021, at 12:00 AM. You can Watch Back Arrow online on Funimation. We will update more updates after episode 17 is released.

Find how Princess Fine and how Sola sacrificed his life here on Watch Back Arrow Episode 16: Preview And Recap.