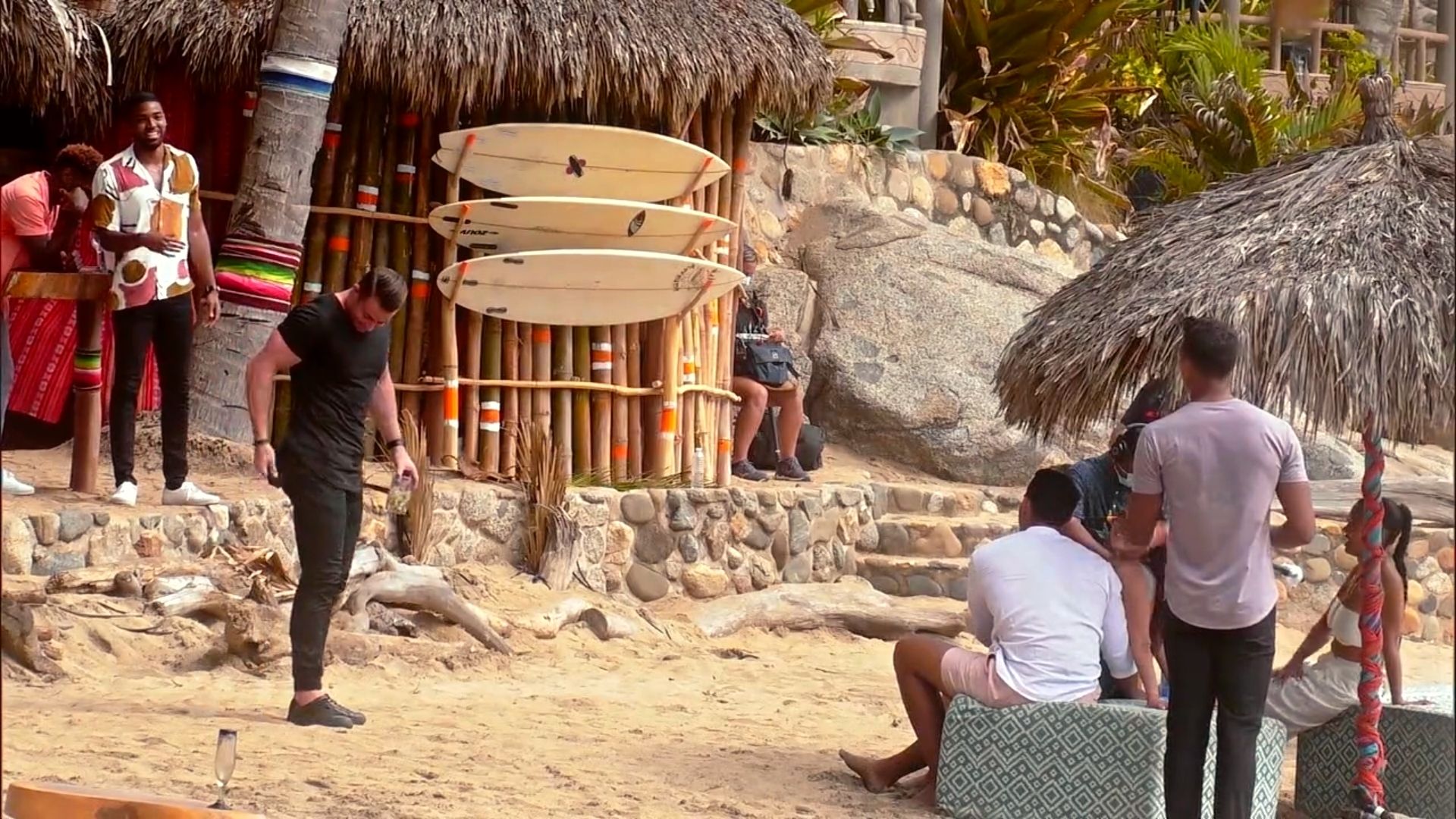 Bachelor In Paradise Season 7 Episode 9 release date has got the fans all pumped up and excited. The widely popular dating show has been a huge hit since it first premiered on 4th August 2014. It has gained a lot of popularity since then and has intrigued the viewers every season. The drama, the fun, the chemistry, and everything else keeps the show among the top choice of dating shows for the audience. The series is a spin-off of the other two major and immensely famous American reality dating shows titled “The Bachelor” and “The Bachelorette”. It has definitely served justice to the original shows with its success in the past seven years.

In addition to that, the contestants taking part in Bachelor In Paradise are the ones that participated in either “The Bachelor” or “The Bachelorette”. Furthermore, they are sent to a paradise-like private island where the show is filmed, hence the name Bachelor In Paradise. Season 7 of the show is now heading closer and closer to the finale every week. It has been another fabulous season with lots of drama that have kept the viewers hooked. The show features several rejected contestants from “The Bachelor” and “The Bachelorette”. Furthermore, the participants are not selected in an equal male to female ratio.

There they have to find their choice of male or female counterpart whom they are attracted to. Moreover, they have to spend time with each other and make a connection. It is the rose ceremony that decides who gets to stay and who leaves the island. The contestants not receiving a rose are the ones who are sent home. The previous episodes of the season had been quite dramatic that has got the fans anticipated for the release of Bachelor In Paradise Season 7 Episode 9. 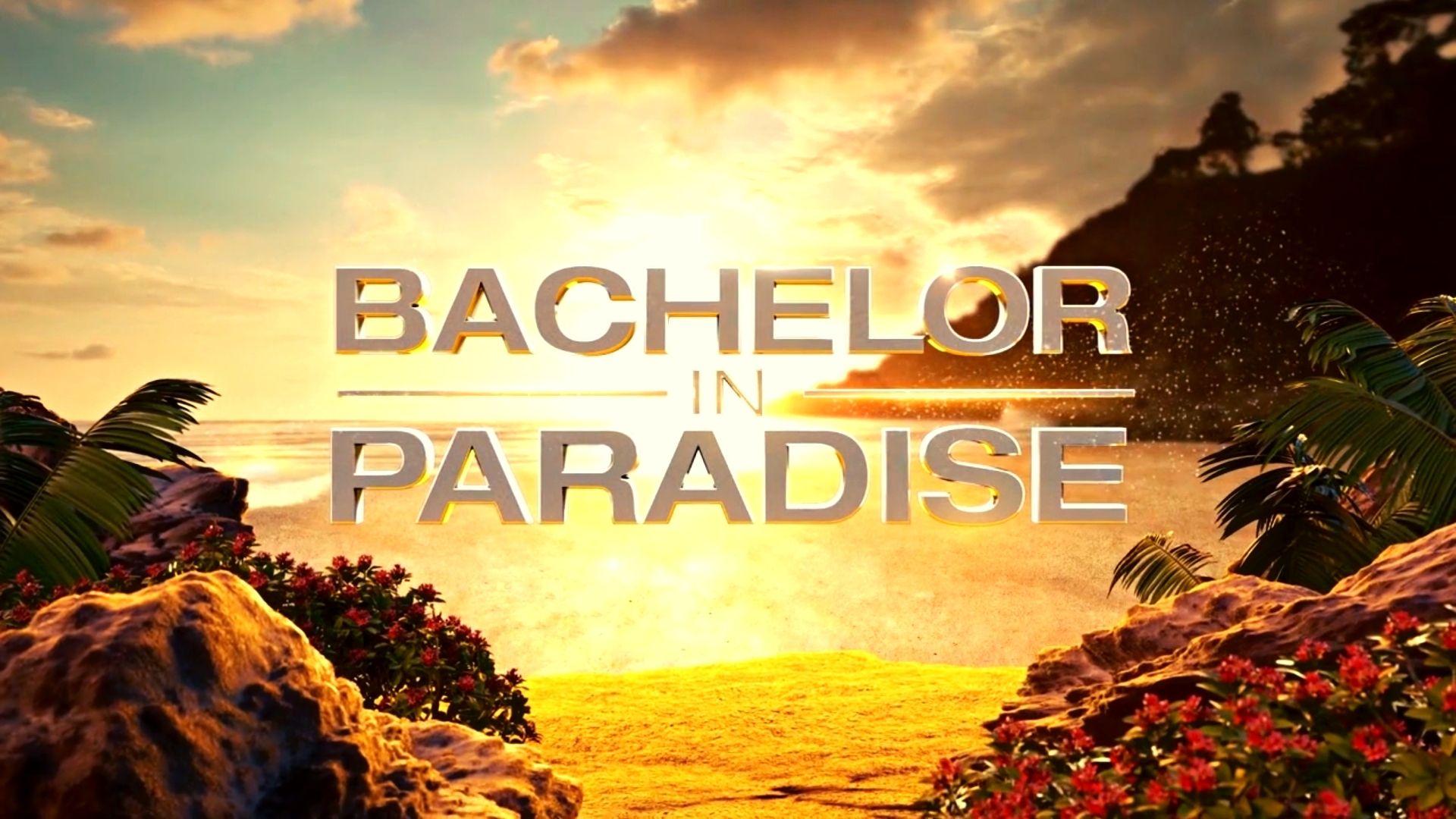 Episode 8 of Bachelor In Paradise Season 7 hit the television screens on 14th September 2021. In addition to that, the episode went live at 8 pm ET on the popular American television network ABC Network. The episode begins with Demi talking about how bad Brendan is even in comparison to Chris who was recently sent home. Brendan used Natasha to stick around on the island as long as Pieper was not coming. The day Pieper joined the show, he left Natasha to get along with Pieper who he had been together with outside. However, their motive was far beyond that.

Brendan and Pieper were seen discussing increasing their social media popularity through the show. Although, it all turned out opposite for them when the two lost a hundred thousand followers. Soon at the rose ceremony, the other contestants including Natasha and Demi confront the two for what they did. But they do not seem to realize their mistake and keep on giving lame excuses. The contestants want them to leave but it is not up to them to make them leave since they are a couple on the show. 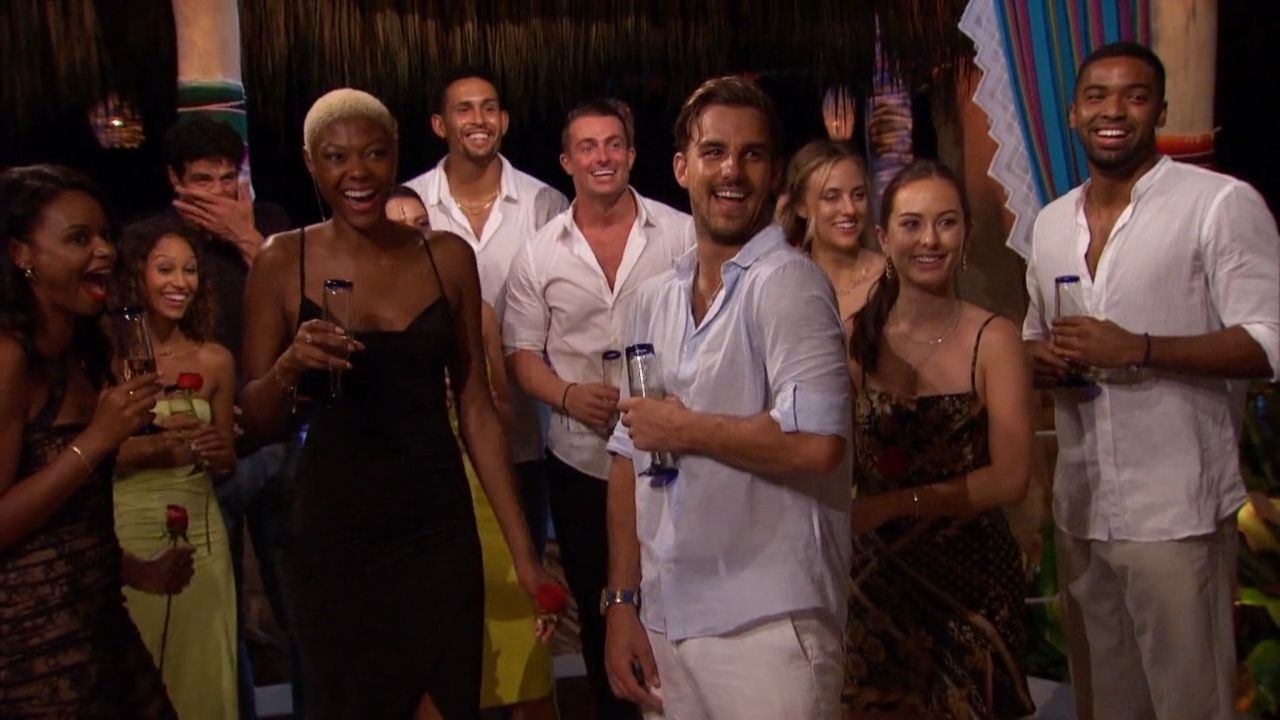 The surviving couples in Season 7 Episode 8

However, Brendan and Pieper decide to leave the island after a lot of drama. On the other hand, we saw another emotional moment for Tammy during the pre-rose ceremony party. The birthday girl has been coupled up with Thomas. She intends to find out where he wants to take things with her. However, Thomas makes it clear that he is seeing himself with Becca whom he recently went on a date with. Tammy tries her best to convince him but he seems clear about his decision. This devastates her as she mentions that this birthday has been even worse than her previous birthday when she got Covid.

Also Read: Where Is Bachelor In Paradise Filmed? All Filming Locations!

What Else Happened And Who Had To Go Home?

Things got interesting when a new participant named Blake arrived and invited Tia for a date. It was only a matter of time and they soon get very much attracted to each other. We see them getting along very well and discuss how they belong with each other. Soon they even get intimate while taking shower outside. Whereas, we saw another new contestant named Dr. Joe to show up for his date with Natasha. However, it turns out to be a rather awkward date as Joe is a very close friend of Brendan. She soon realizes it is not going to work with him. Furthermore, we see Kendall getting all jealous watching her ex-fiancé Grocery Store Joe fall for Serena. 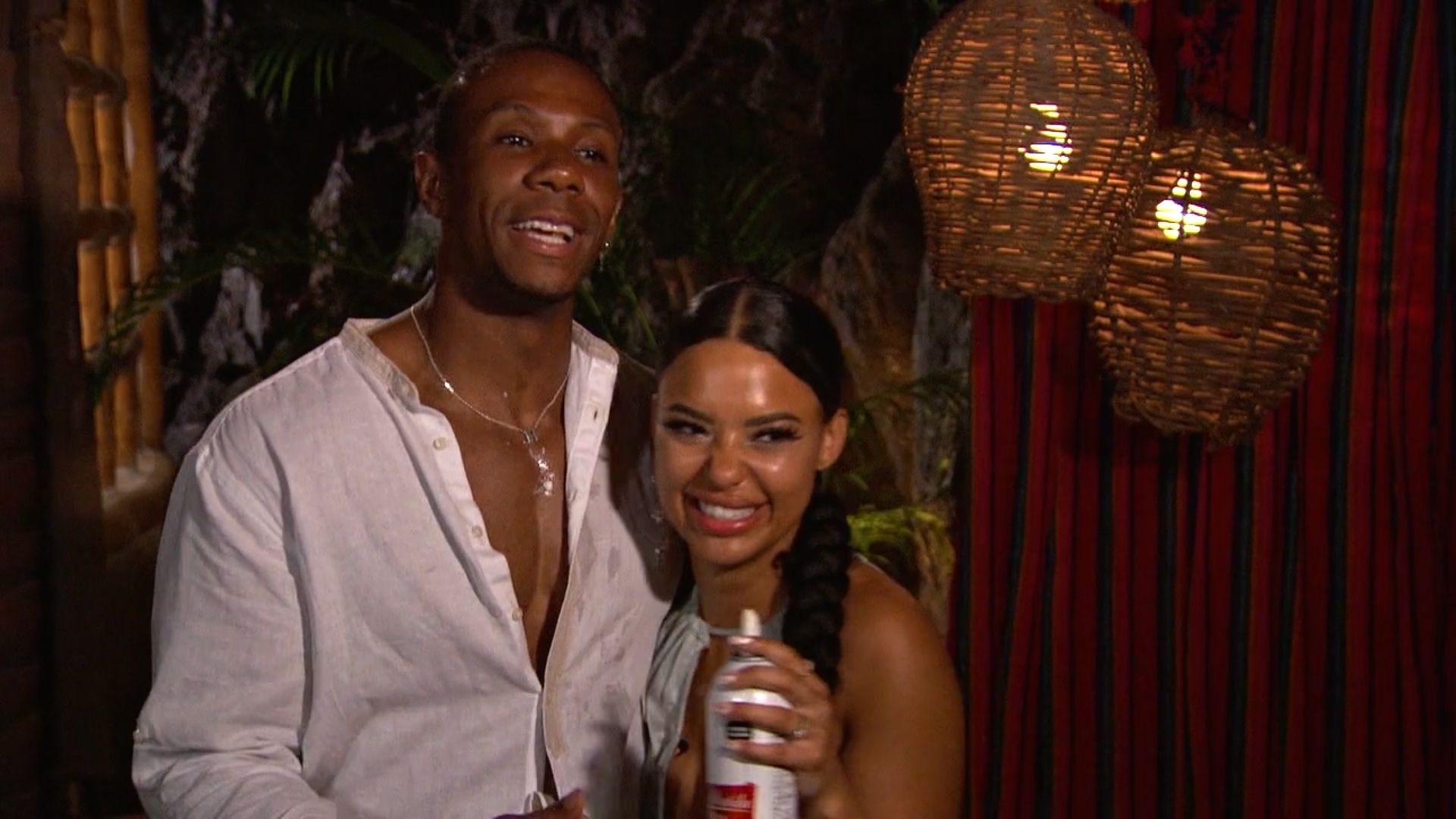 A still from Season 7 Episode 8

It is also hard for her as this is the very show they previously fell for each other. Meanwhile, at the rose ceremony, Wells saves Natasha from eviction by giving her a rose. He states that it is unfair that she suffers because of what Brendan did. On the other hand, eight couples survive at the end of the rose ceremony. They are James and Tia, Aaron and Chelsea, Noah and Abigail, Ivan and Kendall, Riley and Maurissa, Serena and Joe, Thomas and Becca, and Kenny and Mari. This leaves Tammy, Deandra, Demi, and Jessenia who have to go home now.

Bachelor In Paradise Season 7 Episode 9: When Will It Release And What To Expect?

It seems like the upcoming episode is going to bring a lot of tension and drama to the house. Bachelor In Paradise Season 7 Episode 9 will be releasing on 21st September 2021. In addition to that, the episode will air on ABC Network at 8 pm ET. The show is available to watch on the streaming services like Amazon Prime Video and Hulu as well. The upcoming Tuesday is going to be a lot of fun for the audience. 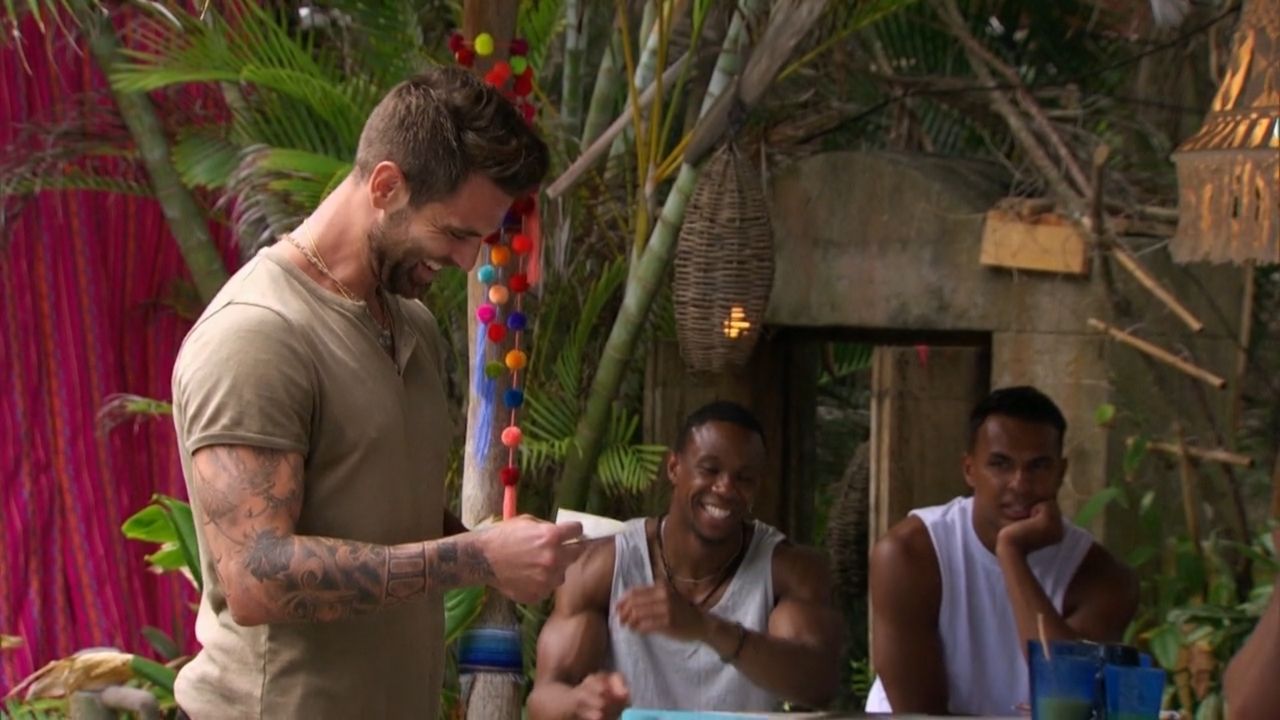 They will get to see some couples confess their love for each other. Meanwhile, Becca will break down in Joe’s arms telling him how much she still feels about him. On the other hand, it will be interesting to watch Serena handle all of this. Furthermore, there will be two more men joining the house who will change a lot of things. In addition to that, a sudden storm approaching the island will make the islanders leave the place. Therefore, it will be yet another quite dramatic episode that the fans would not want to miss.