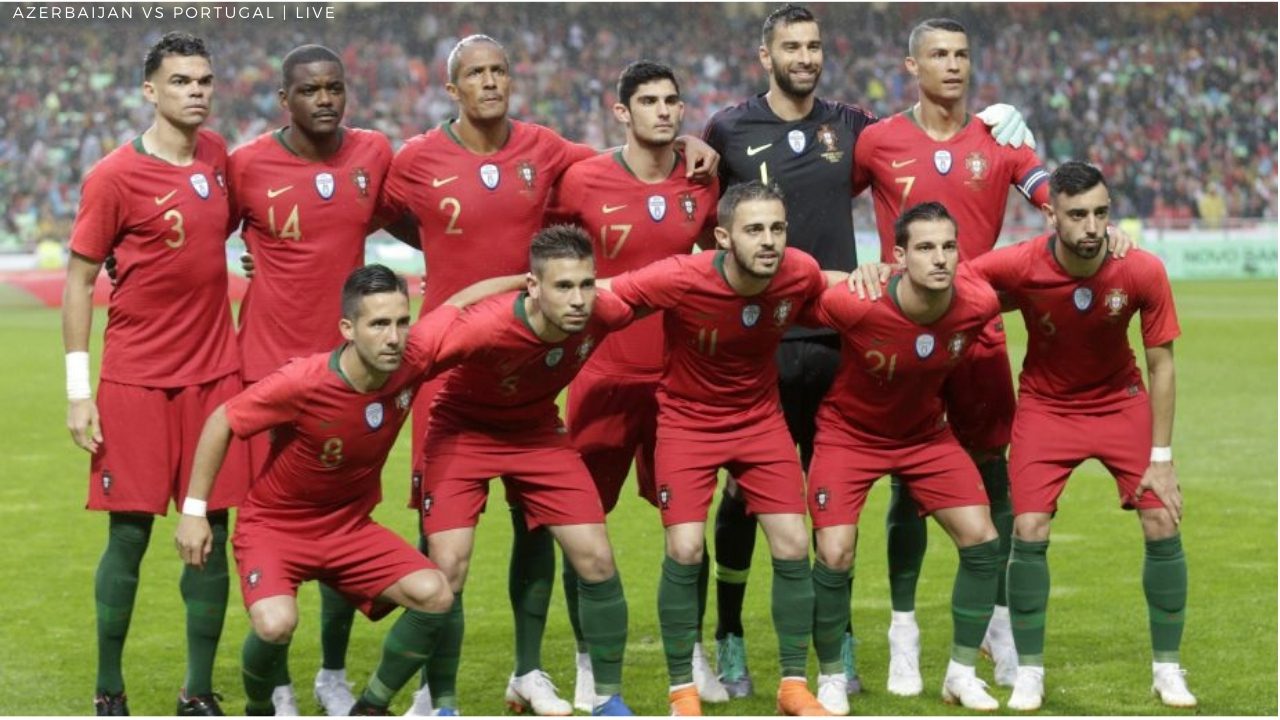 Today’s football Article is about the World Cup Qualifiers as we talk about Azerbaijan vs Portugal Live. Azerbaijan will look to give some credit to themselves as they drew against Ireland with a decent performance. After an impressive display of football in their last match, Azerbaijan faces the ultimate challenge. The underdogs will be facing the mighty Portuguese in their final matches of the group stage. Portugal will be looking to get back their threshold in the group stage of the European Qualifiers. The former kings of Europe thrashed Qatar in their recent friendly match on the weekend. The game against Ireland has been trending ever since Cristiano Ronaldo did the unthinkable. Even at this age, the Portuguese legend is like a beast starving for goals. Today we shall talk about the starting eleven of Portugal and also discuss few dangerous players of Azerbaijan.

Portugal is coming from a great victory against Ireland on Thursday. Ireland was leading 1-0 before Cristiano Ronaldo stole the headlines. In the last seven minutes, the Portuguese captain showed no mercy as he scored two back-to-back goals against the Irish. Not only did he help his country win, but he also breaks another record. Now the great man is the “Top scorer in the history of International Football“. Out of emotions, he took off his jersey and did his signature celebration. CR7 got a yellow card, for which he is not allowed to play his next game against Azerbaijan. So Portugal relieved him of his duty, and he set off to Manchester United. In today’s article, we will discuss the channels and links through which we can watch the match. Then we will talk more in detail about Azerbaijan vs Portugal Live and give a proper analysis.

The match between Azerbaijan and Portugal will be played in the Baku Olympic Stadium. It’s one of the three major home grounds of Azerbaijan. The game will be broadcasted in India. The qualifier will be telecasted on the Sony Ten Sports channel. They will play the game on 7th September. The Kick-off time is 9:30 PM (IST). If you prefer watching online, then don’t hesitate to log in to the Hotstar App. It will stream tomorrow’s all of the World Cup qualifiers. As the matches are based in Europe, you can easily get access to them through Sky Sports too, by logging in to its official Website. The qualifier’s HD coverage is provided by Bing Sports too. Coming to Social Media-Facebook TV and YouTube regularly stream the matches.

Also Read: Romelu Lukaku Girlfriend: Who is the Footballer Dating in 2021?

Portuguese Talents to Look out for:

Portugal surely has the legendary Ronaldo, but they are still a team filled with surprises. Portugal is currently ranked in the top 5 greatest teams of all time. Their arsenal of talented players is massive and unbelievable. The forward line of Portugal is stronger than any team in Europe. After the heroics of Ronaldo against Ireland, Portugal defeated Qatar with ease. Bruno Fernandes, Andre Silva, and Otavio scored to secure the win. Even in Ronaldo’s absence, Portugal still has enough ammunition to kick Azerbaijan out of the qualifiers. Players like Diego Jota, Guedes, Felix will get the opportunity to shine against the underdogs. Ruben Neves, Moutinho, Rafa Silva, and Bernardo Silva will get the chance to showcase their expertise. Azerbaijan’s greatest threat comes from their number 9- Ramil Shaydayev. He is the only threat Portugal should worry about.

Azerbaijan is currently ranked 112 in the world. Portugal is ranked 5. Head-to-head, Portugal won has won all the times they have played against Azerbaijan. The difference is clear but spoiling the party is something which underdogs often love to do. The manager of Portugal, Fernando Santos, will be looking to test the younger talents. But Portugal will retain the top spot of the group. And to do so, they have to defeat Azerbaijan. Azerbaijan Coach De Biasi will look to play a five-man defense. This can help them to stop the onslaught and be productive in counterattacks. Their main man behind is Medvedev, who will lead the backline. Chances are very narrow for Azerbaijan to get a point. But as Ronaldo is not playing, they might just snatch a draw against Portugal.

Who is Jen Psaki? Everything About The Political Star!