Awake: New Netflix Movie Trailer – What is it About?

Netflix’s other upcoming film might keep you up all night. No, it doesn’t run all night long, but the trailer is keeping people awake. Netflix’s upcoming science fiction film Awake has dropped a new teaser. And things are pretty messed up. The 2-minute trailer makes us question many things. But, all our answers will be out once the movie releases. Gina Rodriguez leads the film, and with her two children, she is on a run when the power goes out. Somehow, the movie gives off Black Mirror vibes. With electricity and science ruling upon us until it destroys our lives, Awake surely sends chills down our spines. So, make sure to check out the trailer of the upcoming Netflix movie, Awake.

Awake is an American science fiction thriller by Mark Raso (Copenhagen, Kodachrome). Raso has also drafted the screenplay alongside Joseph Raso. Paul Schiff produces the film, while the story is given by Gregory Poirier. In May 2019, the film was announced, and the principal photography begin in August 2019. And two years later, Awake is ready to hit your screens. As a Netflix original, it will release in all the regions having the services of the streamer.

The director of the apocalyptic thriller also opened about his ideas regarding the film. Raso shared his plans for Awake, and the main character, Gill. Watch the trailer and more about the movie down below.

The trailer opens up with Jill (Gina Rodriguez) and her two children, who are about to witness something they haven’t. While driving her kids somewhere, the radio of the car breaks down. Moreover, a car collides with Jill’s, and suddenly, it is underwater. Both her kids and Jill are rescued. A police officer tells them that the power is out, and nothing is working at the moment.

With an end of the world scenario where the power goes out, no one in the town can get work done via technology. Also, nobody can fall asleep. Two seconds later, we find the complete place filled with debris, as if nothing ever existed. And we see people of the town marching on the roads.

Moving further into the trailer, the screen explained the stages of the caused unfortunate event. The first stage is “Disorientation,” where we see Jill losing her mind as she fires a bullet on a prisoner. The second is “Hallucination..” They find something abstract about the people of the town and presumes that they will die soon. And the last is “Hysteria,” which brings the turning point in the film as Jill’s daughter confesses that she can sleep. 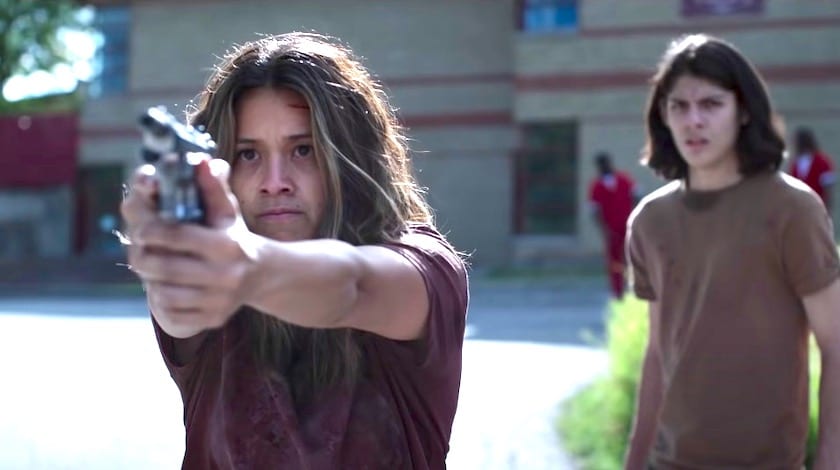 In the next frame, we see the girl sleeping as people try to take her away to solve the mystery. Apparently, she is the “key” to the problem. In the end shots, we see Jill trying to save her daughter before the force sacrifices her to save the town.

The trailer was definitely mysterious, thrilling and made us want to see more of it. Filled with blood, terror, gunshots, and awake people, the film will surely do wonders.

Director, Mark Raso previously said, “We wanted to point a finger at some of the issues in society today — or pre-pandemic society.” He also said that he wanted to give Jill somewhere to go and find her real worth. Also, we wanted to show that as a mother, she would do anything to protect her kids.

Actress Gina Rodriguez, who is leading the film, also commented on her role. She said that before starting a new project, she always asks herself if she can do it. And if she is going to express herself with the new role. Jane The Virgin star then confessed that Jill’s character is so much more. It answers all her questions, and through her, she was able to experience new things. Rodriguez says that Jill is going on different journeys – personally and globally.

Meanwhile, watch Gina Rodriguez in her hit show, Jane The Virgin, on Netflix.