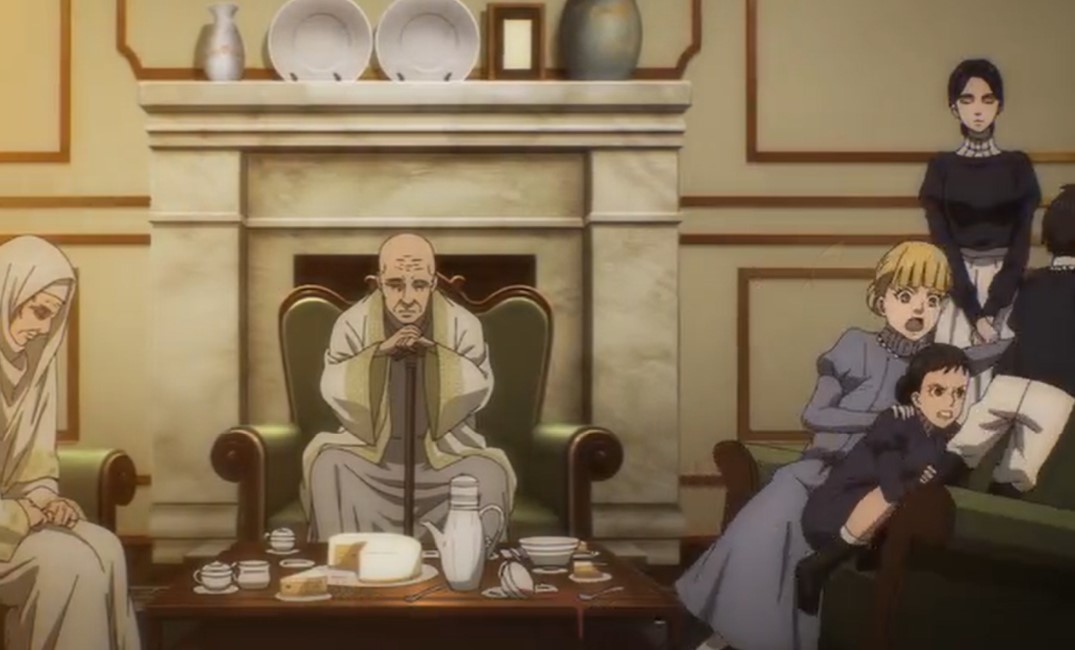 The episode is getting delayed, Attack on Titan Season 4 Episode 5 will not be releasing this week. Let us get to the topic, Falco bums with Mr. Reiner Braun who asking where is he going at this hour and Falco reveals that he has forgotten something he is going to get it. He excuses Mr. Reiner and heads to the opposite directing. He is excited about something he is thinking and he remembers his conservation with Kruger. Kruger wanted to send a letter and if he does it from the internment zone they will inspect the contents.

They will also find out that he is faking his amnesia. He hands the latter to Falco asking him to send it via mailbox outside the internment zone. Falco agrees, asking if he is sending it to his family and Kruger replies that he just wanted to tell his family that he is okay. Falco is glad that he manages to deliver the letter to the mailbox. Koslow reveals to Magath that the Tybur family and their entourage have arrived.

Attack on Titan Season 4 Episode 5  will be released on Monday,  11 January 2021,  at 12:10 AM JST. Make sure to convert the time so that you will be able to get the latest episode as soon as it is released. Visit this anime’s website at shingeki.tv for more updates and enjoy watching this anime on Crunchyroll, AnimeLab, Funimation, and Netflix. Take a look below.

Koslow leads the way to the room where the Tybur family is. When they reach the door Magath finds a mob of soldiers guarding the door. Koslow reveals that the guys aren’t from the army they are Tybur personal guard and they knock. One of the guards opens the door from inside and welcomes them while an unknown man apologizes for coming on short notice. He reveals that he is Willy, the current head of the Tybur family.

Magath replies that he is the captain of warrior operations. Willy introduces Magath to his family and the two talked about when Magath led the warrior operations unit since its formation. Willy asks Magath which one of them was the Warhammer Titan. Magath replies that he has no clue and he doesn’t know why Will came here. Willy laughs and looks at his family say that the Warhammer Titan is one of them.

Willy also reveals that he came here to see Helos statue and started to narrate the story that happened a hundred years ago. At that time a mere human defeated the demons of the earth. Saving the world and becoming Marley’s hero, Helos the savior. The savior didn’t even have a single scratch on him and Willy concludes that Marley’s spirit incarnate. Magath agrees and said that the statue is hollow and reveals that to most Marleyans, war exists only in the newspapers.

Later Magath also reveals why he is instating a draft. Magath tells Willy that if someone wants to pull Marley’s strings from behind the scenes he has words for that person. He also reveals that it will be too late for that person. Willy reveals that one of Magath’s hunch said this country is run by the Tybur family. The Tybur family has given the country its freedom and power as a sign of atonement.

As a result, Eldia and Marley alike were thrust into a dark age the Tybur family is blamed for that. Willy decided that at the upcoming festival he want to reveal everything to the world. He also adds that Marley needs a hero once again. He asks Mgath if he can join him on this endeavor and Magath didn’t respond. The next day Braun had a meeting with his comrades and reveals that the Titians always approach from the south.

Braun reveals the weak defense point, stating that they have an option to skrike from the north. The discus on how they are going to clash with their enemies. The high authority thinks that Braun is giving them worthless information and they better let Eldian speak. Pikie thinks that they are entrusting the entire operation to four little kids. Meanwhile, Falco, Gabi, Zofia, and Udo are on a mission.

At the top of the building, Braun notices that Falco has managed to pass Gabi. One of the soldiers comments that no matter how much Falco improves Gabi still has the advantage. Falco is excited that he beat Gabi for the first time in their training other soldiers think that Falco may be getting the Armor next. Gabi interferes saying that Falco has upset her and she gave back to her country in a real war.

Falco replies that the army hasn’t announced who the next Amor will be and he will keep on doing what he does. Gabi yells at Falco while he is leaving and Falco yells back while confessing that he cares about her. Later Willy had a meeting with soldiers and high authorities revealing that he is going to invite everyone to the Lilberio internment zone.

That was all about the recent development of the upcoming episode, keep in touch to get new updates when a new episode hits.