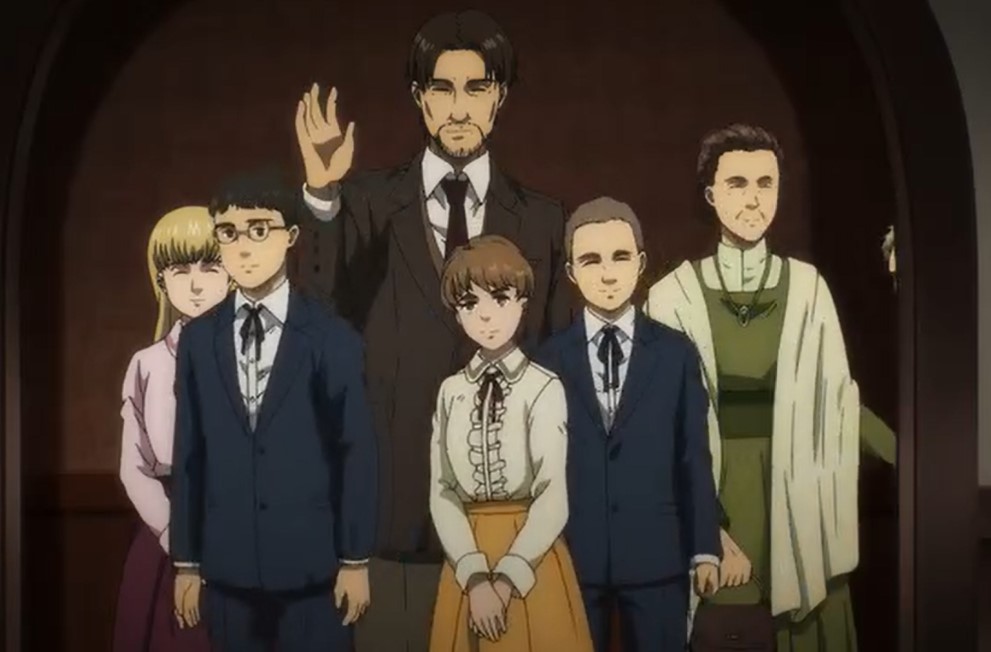 Somewhere in a village, the soldiers are wearing masks and spread the gas all over the village. One of the masked soldiers reveals that the gas contained his spinal fluid. Anyone who inhales the gas will fall unconscious instantly. The soldiers and Zeke destroy the village using the powers of the Titans. The Titans from the village were moving according to Zeke’s will.  Attack on Titan Season 4 has revisited some of the incidents that happened in the past.

In the present, Zeke keeps on saying that village and Akerman it is Ragako, not that village. Ragako is the name of the village that Zeke has destroyed and slaughter the villagers. Zeke replies that he wishes he didn’t do that, but he had no choice since they would have learned that he is aligned top Eldian restoration. The two are camping somewhere in the forest. Zeke is hidden, and no one knows where he is except for Akerman and his allies.

Attack on Titan Season 4 Episode 14 will release on Monday, 15 March 2021, at 12:10 AM JST on Crunchyroll, AnimeLab, Funimation, and Netflix. Check the previous episode and latest development below.

Previously on Attack on Titan Episode 13

Zeke asks Akerman if he had not told him everything when he first landed. Akerman reveals that he keeps on asking since he can see that Zeke is not feeling guilty. But he is not sure about Zeke’s intentions. He told Zeke that he doubts whether Zeke wants to save Eldia or not. Akerman concludes that the life of humans means nothing to Zeke.

Zeke told Akerman not to act like he know how people feel. Zeke asks Akerman when he will meet with Eren and start with the experiment. Akerman replies that he is not sure and he is waiting for the orders from the HQ. Zeke replies that they are making a mistake by delaying the process. One of the soldiers came and reported important news to Akerman. Akerman can’t believe what he is hearing, and he realizes that Zeke was telling the truth.

The plans of meeting with Eren might fail. Zeke looks at Akerman with a fear that what he afraid of has happened. Eren was arrest at the HQ, but he blew up the prison with the help of his new allies. He escaped, and the news spread worldwide; the soldiers started to look for him. Gabi and Falco are still looking for Zeke.

The next day Gabi and Falco head to the place with the South Eldian that has taken them. They know Gabi as Mia and Falco as Ben. The children ask Mia why she is so nervous and told her to feel free. They tease Mia, asking her what kind of a country girl she is. The head of the family told them to eat as much as they want and enjoy themselves.

Mia whispers to Kaya, asking her if there is a Marleyan POW working here. Kaya said yes, and Mia must raise her head high. If not so the truth about Mia and Ben will be exposed. Kaya told Mia that the soldiers always come here often. Ben comments that it will be great if they can have a Marleyan acquaintance here. The name of the head of the family is released by the waiter when he is calling him Mr. Blouse.

The waiter thanks Mr. Blouse for coming, and Mr. Blouse said he had brought his family. Kaya told Ben that the guy who invited Mr. Blouse is Mr. Nocolo they can try to get some info on him. Mia is wondering why Mr. Blouse is invited here since he is not a soldier. Kaya reveals that Big sis was Mr. Blouse’s daughter and a soldier. When Mr. Nicolo came to her funeral, he promised that he would treat Mr. Blouse’s family.

Kaya thinks that Nicole was in love with Mr. Blouse’s daughter. They both enjoy eating food as a family. Ben tasted the food and commented that he has never enjoyed eating this delicious food in his entire life. Nicolo is told that the Survey Corps has come, and Hange is leading them. Onyankopon told Nicolo that they are here to talk about the detained volunteers. Nicolo hates the Eldians; he doesn’t want them to touch his wine.

Ben and Mia notice that Nicolo is in another room, and they head to meet with him. When they reach there, they reveal that they came from Marley and they are a warrior candidate. Nicolo asks why the warrior candidate are here, and Mia said the devils launched an attack on the Liberio district. They jumped on a retreating enemy airship and landed here. Nicolo asks if they have killed someone or a female soldier.

Mia replied yes and said that she is the one who took her down. Ben notice that Nicolo is about to cry. Ben calls Mia by her real name Gabi, after realizing that the woman killed might be Nicolo’s lover. Nicolo gets angry and asks why Gabi has killed Sasha. He took a bottle of wine and started to attack them. Gabi calls Ben by his reals name Falco. She notices that the bottle of wine has hit Falco’s head, and he is unconscious.

Nicolo punched Gabi and brought the two in front of Mr. Blouse, who asks what he is doing to Ben and Mia. Nicolo told Mr. Blouse that Mia is the one who killed Sasha. She is the one who took Mr. Blouse’s daughter’s life, Sasha. Nicolo reveals the truth about the two. Mr. Blouse heard Gabi’s side and decided that she won’t be killed. But the soldiers capture Hange, and the others there is someone who wants to talk with Gabi and the rest.