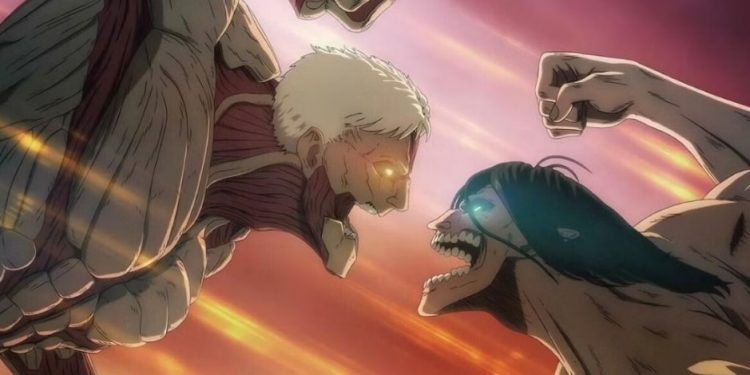 Attack on Titan Final Season Part 2 Episode Schedule reveals all the upcoming episodes for January 2022. The anime has returned to conclude the last season. The war between the Marley and Elidains continues after Eren breaks out of jail. Attack-on-Titan left the fans with questions in its previous seasons. But it has returned containing after Eren break out the prison. We will look at the latest updates of the recent episodes and the schedule for January 2022. Will Eren wield the “Founding Titan” in Attack on Titan Final Season Part 2’s upcoming Episodes? Let’s find out what happened in the previous episode of this anime and recent updates.

The mystery behind the Founding Titan is yet to be revealed as the anime continues. This has become interesting since the anime will offer the final battle of Eren in his complete form of Titan. Eren has different goals from Zeke’s, and he would fight singlehandedly with Marley to achieve his goals. He was once arrested, but his allies helped him escape, and another war has recently begun. The Marley thought that the war between Humans and Titans was over but learning that Eren had escaped, they knew that another war would break out.

The warriors again Eren head out to search for Eren and realize that they must get rid of him since he might escape again. But no one has found the whereabouts of Eren until he exposes himself to a challenge. Gabi, Falco, and others have also learned about the mystery behind the Marley, but they wanted peace. Gabi thought that Pierce was against them, and she faced hardships with Falco traveling around searching for Zeke. Captain Levi realizes that he has learned about Zeke and sets out on a journey to kill Zeke.

Attack on Titan Final Season Part 2 Episode 2 will be released on 17 January 2022.

Attack-on-Titan Final Season Part 2 Episode 4 will be released on 31 January 2022.

In the previous episode, we saw Gabi and Pieck leaving the battlefield after a Titan saved them from Eren. But Eren didn’t care about that since his war was not with them. The Titans continue to fight with Eren, and Marley soldiers also helped stop The Founding Titan’s rampage. Eren knows that even if he loses, he will accomplish his goal. Let’s look at the update of the current war below.

Eren: The Founding Titan vs. The Marley

The war began while The Akerman also joined Captain Levi in hunting Zeke. Captain Levi bumps with Zeke in the first, but Zeke was too pointed for Levi’s men, who got wiped out with a single blow. Zeke and Levi had a one-on-one, but Zeke knew Levi was getting stronger as the battle continued. He realizes that he has to take Levi down, and his Titan is also losing its powers. Zeke almost got defeated after receiving some punishment that puts him unconscious. But during his deep slumber, mysterious incidents beyond his understanding happened.

Zeke was surprised to see a strange girl helping him and molding his body. That molding process revived Zeke, who defeated Levi. But Mikasa and Folch arrived and found that Captain Levi was brutalized. Folch knew that Levi would die at any moment and wondered if they shot take Levi’s head. But they witness a Titan waking up, and Mikasa says Zeke and realizes that she has to escape. She escaped with Captain Levi, but Zeke lets go of them since he knows he has scores to settle with Eren.

On the other side, the Founding Titan rampages and fights with other Titans. Gabi and Pieck were also at the scene. Yelena tried to stop Eren, But Eren wanted to settle things on a duel. Falco and the other were inside the tunnel and heard the Titans rumbling and admitting that the war had begun. The Marley arrives in number to get rid of the Founding Titan. Eren was surprised that they came into a group to get rid of him. They try to restrain him, but he fights back. The Eren: The Founding Titan vs. The Marley continues in the next episode this weekend.

You can Attack on Titan Final Season Part 2 online on Netflix & ANIPLUS on Sunday at 12:05 AM JST. Attack on Titan Season 4 Part 2 is also available online on Crunchyroll & Funimation for those in the UK. Funimation and other official platforms will offer sub and dup episodes. The anime will conclude the episode finale soon since Mikasa will join the battle and settle the scores.