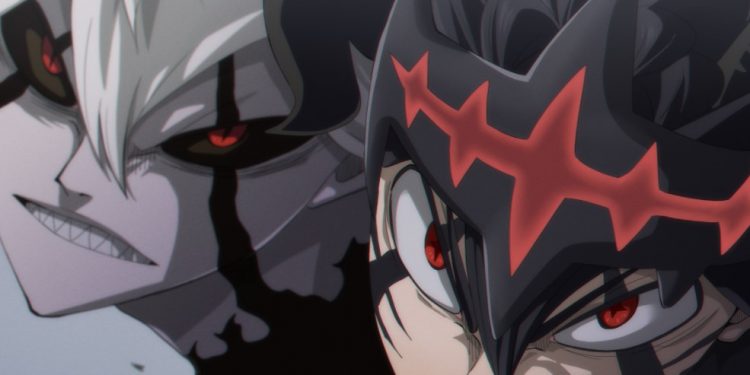 Black Clover Chapter 319 had recently returned, but the manga will take another break. Black Clover Chapter 319 reveals the Anti-Magic boy, Asta, faces Lucifero’s manifestation after Lucifero puts everyone to the ground. Lucifero knows that Asta is the Anti-Magic boy who makes him not manifest at 100%. Black Clover had begun a new Era of Supreme Devil Lucifero after he emerged when the battle ended. In the recent chapter of Black-Clover, Asta floats midair with his Demon Slayer and grimoire while Lucifero glares at him. Liebe realizes that the guy they are facing is not Lucifero alone.

Liebe recall when he met with Supreme Devils and realized that the guy they are facing is the Devil’s King is the worst nightmare. Lucifero asks Liebe if he remembers him. Liebe gets furious and realizes that Lucifero is that “guy” who ruined his life and killed Lucita. Lucifero replies that he doesn’t care about a weakling with no single shred of magic. He asks Asta and the others while calling them unforgivable ones and asks who they are. The Spade Kingdom ground begins to sink, and Asta realizes that Lucifero has astronomical magic and everyone might die.

Liebe told Asta that he wanted to get rid of Lucifero no matter what it took. Asta accepts that and unleashes a Devil Union after they fused. Vice-captain Nacht notices Asta and shouts at him since he thinks Asta might be pulling a foolish move. He also took his Devil form and called out Asta’s name. But Asta knows that his Devil Union Mode has less time, and he has to deal with Lucifero before the time runs out. He wields the Demon Slayer and tries to cut Lucifero in half.

The chapter title is “In The Presence of the Devil King.” Lucifero dodged a massive slash that broke the ground with its wind. A Supreme Devil watching the battle realizes that someone can fight within Lucifero’s territory. He is surprised that the boy with no magic gives Lucifero a hard time. He believes that Asta is odd since he has never met an Anti-Magic boy. Asta continues to swing his blade and says that he doesn’t care about Lucifero’s magic, and he and Liebe will take him down within four minutes of Devil Union.

Lucifero wonders how dare that brat underestimate his powers and wonders why an Anti-Magic boy is bragging in front of the Devil’s King. He blocks Asta’s sword with his palm. Asta tried to withdraw his sword, but he couldn’t move it back and wondered if Lucifero’s hands were sticky. He tried his best, and Lucifero used the tip of his finger to punish Asta. Lucifero notices that the Demon Slayer sword has scratched his finger and notice little blood. He gets angry and wonders how dare a brat scratch his finger and calls Asta garbage.

Lucifero landed a massive punch on Asta’s face and left a mark of his fist on Asta’s face. Asta got sent flying when Lucifero withdrew his fist; the gust of wind pushed Asta to a distance. The other Supreme Devil is impressed by Lucifero’s magic since his attacks can hurt Asta without even landing due to the pressure of the wind. But he knows that Lucifero didn’t get 100% of manifestation. The Supreme Devil believes that Asta would never defeat Lucifero since it is like a battle between an ant and an Elephant where an ant would never beat an elephant.

Black Clover Chapter 319 will be released on 16 January 2022. Asta’s face is brutalized, and Vanessa realizes that Rogue’s magic saved them. But they have less magic, and Captain Yami is weaker. She realizes they have to do something since all the captains are weaker. Vanessa admits that Lucifero is the King of Devils, and everything will bow before him. Let’s look at Black Clover Chapter 319 official details.

You will be able to read Black-Clover-Chapter 319 online on Shuesisha’s official website. Black Clover Manga’s recent chapters are serialized in VIZ Media & Shonen Jump every Sunday. Black-Clover Chapter 319 spoilers will be released after two weeks. Asta realizes that Lucifero only punched him but is worried that a single strike felt like multiple attacks hit him. Megeleona, Fugeleona, and Nozel decided to join the battle. Jack the Reaper and other captains also join the battle. Let’s meet when Black Clover Chapter 319 is released.

Lee Seong Gye Accepts His Fate And Sits On The Throne In ‘The King Of Tears, Lee Bang Won’ Episode 9