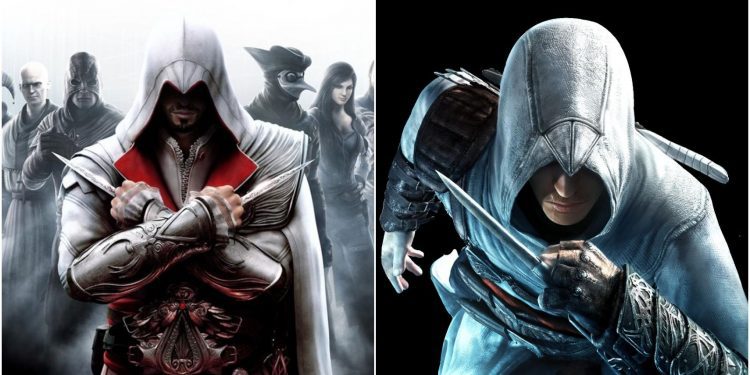 After the release of Assassin’s Creed 1 and 2, fans just bombarded every forum and social media with this question, who is stronger, Ezio or Altair? It is still asked in the present day by newcomers as well as the veteran Assassin’s Creed players. This article will answer your question, so scroll down to find out who is stronger. Assassin’s Creed was released back in 2007 by Ubisoft Montreal. The story follows Altair and his journey to redeem his mistake by assassinating nine individuals. The game was positively received, and the main winning factor of the game was its gameplay mechanics. Assassin’s Creed has sold more than 5 million copies alone.

He is the son of Umar Ibn-La’Ahad, an Arab Muslim, and Maud, a Christian mother. From a young age, Altair practiced the Assassin’s benefit. He fights Borgia but spares him, who flees. With the Pieces of Eden, he enters the vault where an Isu Civilization member Minerva tells about a cataclysm to Desmond Miles through Ezio.

Ezio’s journey comes to an end when he searches for the Library of Altair, which contains vast knowledge under the Maysaf castle locked by five keys. He then sets out to find out all the keys, which really are Altairs memories. After finding them, he goes to the library only to find nothing but the corpse of Altair with the sixth key. He decides to leave the Apple there. Ezio then talks with Desmond saying he hopes he helped him (Desmond) in what he is searching for.

Who Is The Stronger Assassin, Altaïr or Ezio in Assassin’s Creed?

This is a decade-long difficult question and is still asked today by all the fans. Both the Assassin lived in different timeframes and different technologies. But it is still not enough to degrade the value of the two greatest assassins in the whole Assassin’s Creed franchise. When we play Assassin’s Creed II, we get the codex and documents of Altair that contain the knowledge of a weapon and techniques, and from this, we can see that Altair did not just create them but also mastered them. Altair was “truly” a master assassin because of his stealth ability. Nobody could escape from Altair if he was his target. Altair endured so much during his life, even then didn’t use the Apple for his selfishness. This wins him a point.

Ezio is also not behind Altair either. He learned many new fighting techniques and perfected all of them in his whole life. He also has many advantages over Altair due to the technological advancement of his time. The one thing which makes Ezio above Altair is we learned more about him as he appeared in more media than Altair.

But the true versus match between two Master Assassins is something that can only be speculated and not correctly answered. Ezio fought many enemies in his life but none as good as Altair and vice versa. We can only find out if Ubisoft ever makes an Assassin’s Creed game with character crossover and makes the two legend fight. Until then, we can say that both characters are equally dangerous and powerful.