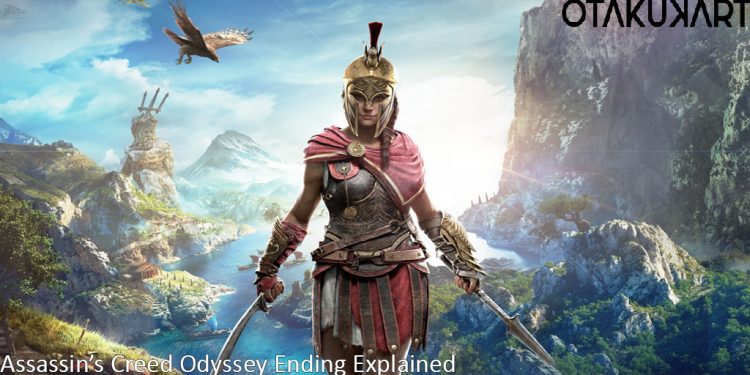 Odyssey follows Eagle Bearer on their journey to find their long-lost sibling while fighting and undermining a cult called Cult of Kosmos(Templars) and takes place during the Peloponnesian War from 431 to 422 BC. Assassin’s Creed Odyssey was leaked before the official announcement in May 2018. In E3 2018, Ubisoft officially announced it. The game, at its release, received positive reviews from fans and critics. The game was also a commercial success and has sold more than 10 million units. The revenue generated by Odyssey was higher than that of Origins.

Upon reaching Megaris, Eagle Bearer gets involved in a war between Spartans and Athenians. After eliminating the Athenian leader, Eagle Bearer meets with their father, where they learn Nikolaos is not the biological father. The Eagle Bearer is then told to find their mother, Myrinne. Eagle Bearer learns of Elpenor’s allegiance to a cult, the Cult of Kosmos, and kills him. Using Elpenor’s clothes and mask, the Eagle Bearer enters the Cult’s base. There Eagle Bearer discovers about their younger sibling being alive and made a member of the Cult, known as Deimos.

Eagle Bearer then starts her journey to find their mother, who is in Naxos under the alias of Phoenix. Myrinne learns about her other child also alive and asks the Eagle Bearer to help her find their younger siblings and destroy the Cult’s whole plot. The Eagle Bearer encounters their sibling, Deimos, in the battle of Pyros. In the battle, Eagle Bearer fights Deimos. At one point, Eagle Bearer tries to save Deimos, which gets them captured and put in prison in Athens.

The Eagle Bearer then chases and kills Kleon. Then along with their mother, they meet Deimos at Mount Taygetos. At the Mount, based on choices taken by the players at some crucial phases, the game will either have a good or bad ending.

Good Ending – How To Get It And Detailed Explanation

To get a good ending for Assassin’s Creed Odyssey, players must have to make a crucial decision during certain missions. All the decisions should be positive choices. The players must make these decisions in the following chapters:

When the player does as above, the game will trigger the best ending. At the end of the Odyssey, Deimos will be angry and will try to fight Eagle Bearer, but instead of fighting them, Eagle Bearer will give them their grandfather’s spear. This will break Deimos into tears. Deimos, Eagle Bearer, and their mother will reunite and hug each other. After these events, all the family members will go back and have dinner.

In the present, Layla Hassan, after reliving the memories of Eagle Bearer, uncovers the location of Atlantis and goes to Santorini. There, Layla meets Eagle Bearer themselves, who has been alive for more than two millennia with the Staff of Hermes, a Piece of Eden. Eagle Bearer will warn Layla that Assassin Order’s ideal or Templars ideal should be balanced. If any Order’s ideal is given more favor than the other, the doom of the world will come surely. After this, Eagle Bearer gives the Staff of Hermes to Layla and sacrifices their life. The Eagle Bearer will sing an ancient Greek lullaby in their last moments.

Bad Ending – How To Get It And Detailed Explanation

In the bad ending, the Eagle bearer will either be: left alone as every family member dies or Myrinne abandons her. To achieve this ending, the players must make these decisions in the following chapters: