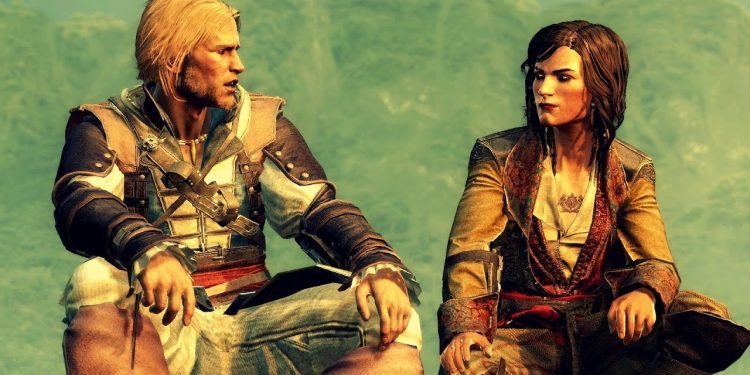 Edward Kenway and Mary Read were a symbol of true friendship but did Edward End up with Mary Read? That’s a question left unanswered for years. So, what’s the truth? Read further to know everything about the pirates, Edward and Mary, and the bond between the duo. These are the characters of the game Assassin’s Creed IV: Black Flag and the heroes of the same. The complete story revolves either around Edward or Mary or both of them together.

Assassin’s Creed IV: Black Flag is a Ubisoft Creation, and its developers are Ubisoft Montreal. Mary and Edward had their first appearance and first meet-up in this story-based game. Edward was the stunning protagonist who received a lot of positive responses from the audience, and Mary was no less in terms of popularity. However, the game received a mixed review, but the story of the two characters is certainly amazing, so did they ever date or fall in love with each other. Let’s find out in this article.

Who is Edward Kenway?

The toughest and the most stunning character of Assassin’s Creed IV: Black Flag was Edward Kenway or Edward James Kenway. He was born to a farmer couple of Welsh, who was humble and just like other farmers. On the other hand, Edward Kenway was getting attracted to luxury, wealth, and prosperity. As a result, he joins privateer in West Indies for the Royal Navy, and later, he becomes a pirate. He did everything early and didn’t wait for a certain age. Also, he was struggling with all he did, but money was attracting him a lot, and that’s the reason he landed in the world of Piracy.

Talking about his personal life, he married a rich woman. When Edward was saving a housemaid from being raped, there came Caroline, and she intervened on his behalf. So, this meeting resulted in a lovely bond, and somehow they married. But, Caroline’s father was against this marriage as they were rich and Edward was not. Caroline wanted Edward on any condition, so she got disowned by her parents. Now, she left her parents and started living with Edward in his parent’s house on Farm. Everything was fine until Edward started feeling guilty as he wasn’t able to provide his wife what she deserves, that is luxury. Well, this bond ended anyway. Now he moved ahead in his life and met many ladies, but Mary Read was different.

Who was Mary Read?

Here comes Mary Read, a mysterious and incredible personality who can go beyond everything for her dreams, success, and desires. This amazing lady was born in the Kingdom of England and died in Jail. Her parents always dressed her like a boy and tried to make her familiar with the things that boys do, whether it’s fighting or behaving like them. But, Mary knew what she should do and what are her preferences. At an early age, she joined Royal Army as she was getting professional as a sailor. Later, she became a member of the West Indies Brotherhood of Assassins, and her loyalty to it was proving her aims.

Well, she entered that team because of a man named Ah Tabai because she sensed that he was wise and trustworthy. Now, in 1715 she met more pirates, and gradually she was struggling, working, but one day, she was caught because of an attack. Somehow she was on the verge to escape prison, but she got sick. The reason for her illness was nothing but the unhygienic area where she was kept.

Does Edward Kenway End up with Mary Read?

In 1715, Edward met James Kidd and other pirates, but James and Edward developed a good friendship. They used to face all the challenges together, and they also used to complete all the missions together. And James Kidd was the only person who was trustworthy for Edward. When Edward was new to the ship, James was the one who helped him with all the stuff. One day they were on a mission to assassinate their selected targets, but when some guards were becoming obstacles, James said that he will distract them. After this, that James removed his bandana, and his lips were red, and guess who was he?

Well, he was no one but Mary Read. So, yes, Mary Read always behaved and dressed like boys. If you remember, I mentioned that Mary did everything for her desires. So, in those old days, girls weren’t allowed to do several things, but Mary was different. Now, it is said that the duo was attracted to each other. It might be true because when Mary was dying, Edward was in a tough situation as he too had to escape prison, but he wasn’t leaving without Mary.

Also Read: Everything You Need To Know About Assassin’s Creed Valhalla Pre-Order