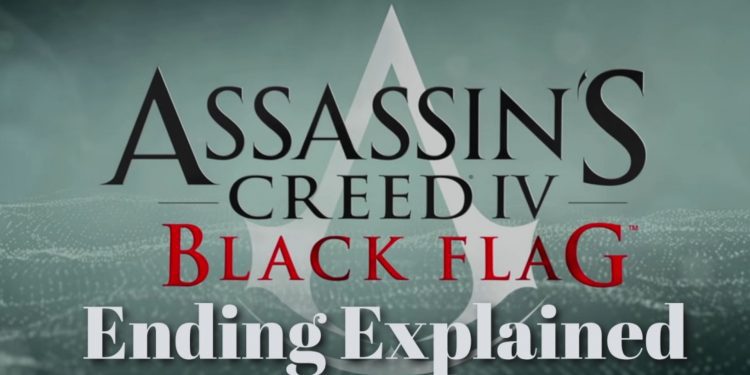 Assassins Creed 4, the successor to the 2012 game Assassins Creed 3, is an action-adventure video game developed by Ubisoft Montreal and published by Ubisoft. We will be looking at Assassin’s Creed 4 Ending Explained. Assassins Creed: Black Flag is the sixth installment in the franchise. While the historical events in the game proceed its successor, the modern-day story of the game continues from where Assassins Creed ended. The game was released for PlayStation 3, Xbox 360, Wii U, PlayStation 4, Xbox One, and Microsoft Windows. As part of The Rebel Collection alongside Assassin’s Creed Rogue, the game was released for Nintendo Switch in 2019.

Likewise, the other game in this series, Assassins Creed, takes place in a fictional historical world that has inspirations from real-world events. We could see the conflict between the Assassins and the Templars, where one organization works for free will while the other wants peace through control. The gaming begins in the modern 21st century where the player gets to play as an employee of Abstergo Industries, which can be considered a modern-day Templars and gets caught in a conflict with the Assassins.

Then we are taken to the main story, set in the Golden Age of Piracy from 1715 to 1722, in the Caribbean. Here we see a notorious Welsh pirate, Edward Kenway, the grandfather of Assassin’s Creed III, protagonist Ratonhnhaké:ton and father of the antagonist Haytham Kenway. We see Edward stumbling across an Assassin-Templar conflict.

The major part of the game in this period tells about the attempted establishment of an independent Pirate republic in the Caribbean. What makes the Assasins Creed Black Flag different from its predecessor is the gameplay focusing more towards ship-based exploration in the seamless open-world map. But it doesn’t abandon its previous game’s third-person land-based exploration, along with melee combat and stealth system. The same goes for multiplayer.

The game covers cities such as Havana, Nassau, and Kingston, with numerous islands, sunken ships, and forts. Black Flags also gives players the ability to harpoon large sea animals and hunt land animals. Assassin’s Creed IV: Black Flag received was widely appreciated critical acclaim for its open-world gameplay, naval combat, graphics, narratives, and pirate theme and was one of the best-selling games of 2013, crossing 15 million copies sold as of 2020. Assassins Creed not only received appreciation but criticism also. The criticism was mainly for the historical story missions being repetitive.

Months after the death of Desmond Miles, as part of his sacrifice to save the world in Assassin’s Creed III, samples taken from his body were used by Abstergo Industries to explore his genetic memories using Animus’ newfound cloud computing abilities. An unnamed player character is hired by Abstergo Entertainment to research the memories of Desmond’s ancestor Edward Kenway.

This is to gather material for an Animus-powered interactive feature film. But all this was done by Templars as part of their search for a First Civilization mystical device known as the Observatory in Edward’s memories. Edward was in search of this device to make money out of it. But on his way to that, he inadvertently becomes involved when he kills a rogue Assassin named Duncan Walpole.

Edward takes Walpole’s place at a meeting of Templars in Havana and gets to meet Woodes Rogers, Cuban Governor, and Templar Grandmaster Laureano Torres. Later a band of notorious pirates, including Blackbeard, Mary Read, Benjamin Hornigold, and Charles Vane, dream of a pirate utopia. They want a place where man is free to live beyond the reach of rulers.

With Edward’s help, the band was able to seize control of Nassau and establish a pirate republic. However, due to poor governance, lack of an economy, and an outbreak of disease, the republic soon collapse. The founders end up divided, while Edward attempts to resolve the dispute. It all ends up in vein as the Templars exploit the situation resulting in Blackbeard’s death, betrayal of Hornigold Rackham’s mutiny, Insanity of Vane, and thus the collapse of their dream.

After that, Edward and Roberts set to uncover the location of the Observatory and then become successful in it. He retrieves the artifact powering it, but Roberts betrays Edward and lets the British arrest him. Edward soon escapes from prison after a brief stint in prison. This was the same time when Ah Tabai the Assassin Mentor, comes to rescue Mary Read from the same place.

Edward joins them, on their way, Mary dies following their child’s death, this influences Edward, and thus that, he decides to join the Brotherhood. After joining the brotherhood, he chased down and eliminate Roberts along with the Templar conspirators. Edward soon retrieves the artifact and returns it to the Observatory. Meanwhile, Edward comes to know that his wife had passed away. After the imminent arrival of his daughter, Jennifer Scott, he returns to England.

The game’s main character is Edward Kenway, a Welsh pirate who eventually becomes a member of the Brotherhood of Assassins. Edward is the father of Haytham Kenway, Colonial Templars Grand Master, and the grandfather of the Assassin Ratonhnhaké:ton. While the game is fictional, the players still get the chance to meet several real-life historical figures.

The Assassin’s Creed 4 answers many of the mysteries and the clues that the players were having regarding the game. In Assassins Creed 3, we see the death of the protagonist Desmond, who had to sacrifice himself to save the world. With the death of Desmond, Juno, an evil character from the long-dead First Civilisation race, Isu, mopped up the solar radiation and thus saved the planet.

But after saving the world, she was able to roam freely. When the players thought she would be having a huge role in the game, she just ended up in a cameo appearance. The story of Assassin’s Creed 4 goes back to the early 1700s, where we see Edward Kenway, the grandfather of the American Assassin Connor Kenway. Edward is a Pirate who is leading his lucrative life-stealing ships.

But this soon changes when he comes to learn about the Observatory. This is a mystical device that can spy on anyone anywhere in the world by using just a sample of their blood. This can sound similar to the First Civilisation’s version of PRISM. Since he realized how much money this mystical device could bring to him, he decided to meet a mysterious sage named Bartholomew Roberts.

Meanwhile, the heroic Assassins and Templars are also searching for this device. As for the present time, the players play as an anonymous researcher who is testing Edward’s memories within the newly-formed video game development company Abstergo Entertainment. Templars backed the company, and when they came to know about the same, they got excited.

Back in the time when Edward met the sage, he had pointed out that the device contained the samples from First Civilisation individuals. He says that while it won’t be useful for that time, it could be useful in the future. The ending to Edward Kenway’s story is more straightforward and surprisingly mature for a series all about stabbing people.

After realizing that he had been roughly living his life, Kenway decides to return to England with his newly-discovered daughter. The decision resulted from all the deaths that he had to go through, including his wife, close friends, and many others. By the game’s epilogue, we could see Kenway’s young son Haytham on the day he meets Reginald Birch.

Also Read: Does Arno end up with Elise? What Happened Between the Assassins Creed Duo?

Assassin’s Creed IV: Black Flag, like the other games in the series, is an action-adventure, stealth, open-world game. The game’s story goes through the regions such as Havana, Kingston, and Nassau, which come under Spanish, and British pirate influence, respectively. The plot points also cover locations such as Port-au-Prince and smaller locations like Greater Inagua.

Players get to explore the open world soon after starting the game. This is very different from the opening of Assassin’s Creed III, where the players had to go through scripted missions and didn’t get the chance to play freely until the first act. The Open world of this game had been widely appreciated for the environment especially the jungles, forts, and ruins. The most intriguing fact of AC4 is that it allowed players to explore more in the sea.

The hunting system has been the same as Assassin’s Creed III. One new addition is the inclusion of Jackdaw, the ship that the players get to captain. Jackdaw is an upgradeable ship that can be done throughout the game. The players also get the ability to access spyglass, the ability to examine distant ships. Undoubtedly, naval combat was one of the key features behind the success of Assassin’s Creed 4 Black Flag.