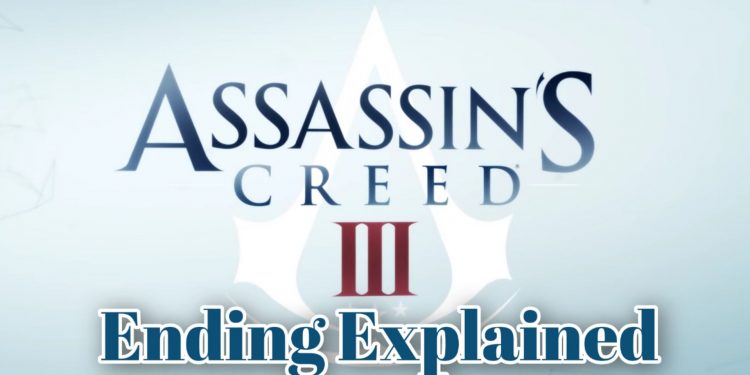 Even after playing some games years ago, some of them will still be stuck in our heads. Either as a good memory or as a bad one. We may also be left with some doubts too. One such game is Assassin’s Creed 3. Even if you are playing the game now for the first time or may have played it years ago, you may still have some doubts about the Assassin’s Creed 3 Ending. So in this article, we will be helping you with a detailed piece where the ending for Assassin’s Creed 3 will be explained. Here, we will take a deep dive into the synopsis, story, and, as expected, the ending.

Assassin’s Creed III was a game released as a sequel to Assassins creed 2 in 2012. Developed by Ubisoft Montreal and published by Ubisoft, this game was the fifth installment in the franchise and was available to play on platforms such as PlayStation 3, Xbox 360, Microsoft Windows, and Wii U. The story of the game was set in a fictional history that was set in the 21st century and has events similar to the real world and follows the millennia-old struggle between the Assassins, and the Templars. While Assasins tried to preserve peace and free will, Templer’s desire was peace through control.

Before we look into Assassins Creed III ending, let us take a quick refresh surrounding the game. As we have said before, the story is set in the 21st century, where we first meet the protagonist was Desmond Miles. With the aid of a machine known as the Animus, Desmond relives the memories of his ancestors and finds a way to avert the 2012 apocalypse.

Then we are taken back to the 18th century, where the main story takes place during the American Revolution, between 1754 to 1783. Then we meet the real protagonist of the story, Ratonhnhaké:ton / Connor, Desmond’s half-English, half-Mohawk ancestor. Throughout the game, we see Connor fighting against the Templars in his attempt to gain control of the colonies.

In the first portion of the game, players also get the chance to play as Connor’s father. Ubisoft had developed a new game engine called Anvil Nex for the game. Assassins Creed 3 was widely appreciated for t’s third-person perspective open-world gameplay. This game tests the players’ stealth skills and their combat abilities to eliminate targets. Players will be able to explore freely through 18th-century Boston, New York City, and the American frontier.

Also Read: Everything You Need To Know About Assassin’s Creed Valhalla Pre-Order

When the Ezio trilogy comes to an end with the Assassin’s Creed: Revelations, Assassin’s Creed III takes us to a new historical period: the 18th-century Colonial America with two new; Haytham Kenway and Ratonhnhaké:ton, also known as “Connor”. Haytham is a British nobleman and a high-ranking member of the Templar Order. He is sent to America to establish the Templar presence on the continent and a mission assigned to finding the temple of the First Civilization.

Meanwhile, Haytham’s half-Mohawk son joins the Assassins to avenge the burning of his village by the Templars. He also wants to stop the Templars from gaining control of the colonies. Connor’s story spans two decades of his life that tells us the story of his childhood, covering major events from the American Revolutionary War. Like the previous games in the series, the Assassins Creed takes place in modern-day 2012. In this day and age, the game tells the story of Desmond Miles. He is assigned with having the humanity from an impending disaster. Unlike its predecessors, Assassins Creed III involves actual missions to advance in the game.

Also Read: Does Arno end up with Elise? What Happened Between the Assassins Creed Duo?

If you have not completed the game yet, we would like to inform you that the next part of the article contains major spoilers for the game, and if you don’t want us to spoil the game for you, we are giving you this warning. With that’s done, let’s move with the ending of Assassins Creed 3:

By the ending of Assassin’s Creed 3, we land in a situation where Desmond Miles, the modern-day protagonist of the game, is asked to choose whether to decide between dooming the world to a fiery apocalypse or letting Juno decide the future of the world. But as we all know, Juno is a vengeful godlike figure from the series’ mysterious precursor race.

If he decides to go with the apocalypse, he gets to live, but if he lets Juno take over, then it leads to his death. But Desmond decides to sacrifice himself to save the Earth. By ensuring humanity’s survival, Desmond ensures the ideology of the Assassins to ensure free will. Even though he had a place in the development of the story, Desmond was never really given time to grow as a person or allowed to find a place in players’ hearts.

When thinking about the fate of Desmond, he didn’t get the appreciation that he should have received, even from the studio. That dude gave up his life for humanity still; no one cares. Even the marketing for Assassins Creed tells a similar story. Like most of the players, we also love Connor more, which could be why the studio decided to showcase Connor more.

Desmond had no other choice other than this. Even though he didn’t want to make this decision, he had to make this last-minute decision to save humanity. Only because of transcendence, Juno preserves herself in the Grand Temple walls. Juno was able to dissipate the flare using the radiation-absorbing towers, which she mentions that she had started working on it secretly.

Since Juno has escaped, there is a chance that this might not be the last time we will be seeing her. Keep in mind that the criminal organization Abstergo is still a threat. A voice that can be entered while re-entering the Animus might be the Templar technician hacking into an imprint of Desmond’s memories. This might have sequenced when the young Assassin was held at the facility.

Where to Play Assassins Creed 3?

To play the game in the minimum specifications at 30fps, your OS should be at least on Windows 7 SP1 and above on the 64-bit versions. The processor should be a minimum of Intel Core i5 2400 @ 3.1 GHz, or AMD FX 6350 @ 3.9 GHz with at least 8GB ram and video card from Nvidia GeForce GTX 660, AMD Radeon R9 270X (2GB VRAM with Shader Model 5.0. The resolution will be set to the lowest in this setting, with the video preset at the lowest.