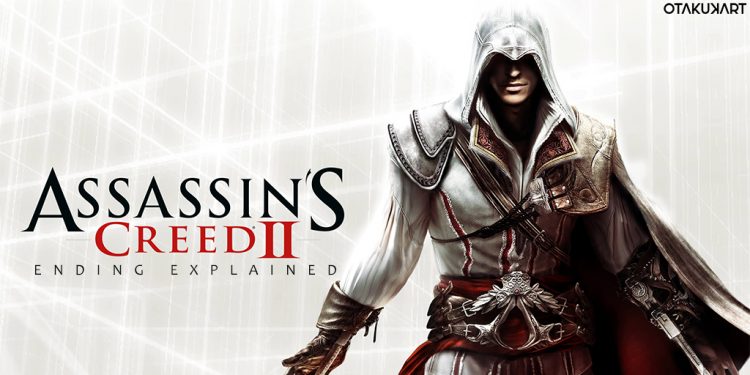 The first Assassin’s Creed game came out in 2007, which turned out to be a massive hit. The success of the game was followed by its successor Assassin’s Creed 2. It got way more successful than the first game. Further, this game was part of a trilogy series that follows the story of the infamous Ezio Auditore. After the massive success of the second installment, it was no turning back for this series.

Currently, the AC series has over twelve mainline Assassin’s Creed Games. It has also become one of the most successful video game series by Ubisoft. But many fans don’t know that the Assassins Creed world was a result of a failed experiment for another infamous Ubisoft game. Initially, the makers came up with the idea of assassins as a sub-plot or a DLC extension for their successful video game, Prince of Persia.

How The The Second AC Game Begins?

AC2 is the direct sequel to the first Assassin’s Creed game. Therefore, it takes on the story from where the first AC game left. Abstergo Industries took in Desmond Miles, the present-day protagonist, for experimenting on him to take a peek into his genetic memories. Because Desmond belongs to the bloodline of infamous assassins, who have been fighting for humanity’s free will from the shadows against their arch-enemies, templars. Further, the Abstergo is no other than the present-day incarnation of Templars. They are looking into Desmond’s mind to seek the location of a special artifact called the Apple of Eden, which will help them control humanity, and Desmond’s assassin ancestors hid it from the Templars.

After going through the genetic memories of his Levantine assassin ancestor, Altaïr Ibn-LaʼAhad, Desmond escapes from the Abstergo authorities with the help of a present-day assassin Lucy Stillman who was working their undercover. She later takes him to his friends and fellow assassins, Shaun Hastings and Rebecca Crane. They later throw Desmond into their Animus 2.0 to relive the memories of another ancestor, Ezio Auditore, and also learn the ways of assassins via Animus’s bleeding effect. Desmond then visits the memories of Ezio Auditore da Firenze, who was a flamboyant and arrogant young man living in 15th century Italy.

How Does Ezio Auditore’s Journey Begin?

Ezio lived during the Italian Renaissance period and lived a carefree life, like fooling around or getting into foolish fights. However, his father and brothers one day got publicly hanged on false charges as a part of political conspiracies. But before their execution, Ezio’s father asked him to take his Assassin tools and gear and escape the city to his uncle Mario’s place with his mother and sister. Further, this was the first time that Ezio got to know about his family’s truth of being part of the Assassin Brotherhood. He then follows his father’s last wish and visits his uncle Mario’s place. There Mario trains the young Auditore in the ways of Assassin. After finishing his training,  Ezio leaves on the mission to avenge the death of his father and brothers by killing the people who were behind it.

On the journey to avenge his family, Ezio comes across many influential people, including some real historical figures like Niccolò Machiavelli and Leonardo da Vinci, who help him on his mission. Further, Vinci even helps him fix his father’s hidden blade and also enhances them to not require the finger sacrifice. As the story continues, Ezio unravels more mysteries surrounding the pieces of Eden, and so does Desmond, who was reliving Ezio’s memories. Further, we get to know that Lucy, Shaun, and Rebecca not only put him in the Animus to train him but also look for information on the pieces of Eden and a specific vault. Ezio also finds out that the man behind his father and brothers’ execution was Rodrigo Borgia, who was a Templar leader during Ezio’s time.

What Were The Major Reveals Before The End?

After knowing the truth about Borgia’s involvement in the execution of his father and brothers, Ezio seeks to eliminate the Templar leader. Ezio eventually manages to confront the Templar Grand Master and even takes the Apple of Eden from him with the help of his friends. However, Borgia escapes before Ezio can eliminate him. However, his actions earn him respect from his friends, who helped him get to this point. They further reveal that they were part of the Italian Assassin Brotherhood and now Ezio is also a part of it. However, after the confrontation with Borgia, Ezio’s memories are inaccessible, and Desmond is unable to visit them, but he suddenly visits the genetic memories of his other ancestor, Altair, for a few moments.

Apart from chasing after Borgia in Ezio’s memories, Desmond also looks for Subject 16’s glyphs which he left behind. After Desmond manages to collect all the glyphs, it unlocks a video which was a huge revelation. The video reveals a man and woman who were Adam and Eve, who ran away from the place called Eden with a Piece of Eden. As the story progresses, we get to know that the stories of casting out Adam and Eve from the Garden of Eden were false. But they willingly ran away from there to protect humanity from their oppressors. We witness further revelation about these oppressors as the game gets closer to the Assassin’s Creed 2 ending and also in the future AC games.

What Happens In The Assassin’s Creed 2 Ending?

Desmond later again visits the memories of Ezio, but this time a bit ahead in time from where he last visited Ezio’s memories. This time Ezio corners Borgia, but the young man from the start of the game who was fueled with anger has now become a man with a clear and cool head. Therefore, he doesn’t kill Borgia but takes his Papal Cross, which was actually the Staff of Eden, Ezio using the Staff and the Apple unlocks the entrance to the vault where he comes across a holographic projection of a lady who presents the biggest revelation in the game. This revelation also leads to the Assassin’s Creed 2 Ending.

That woman was Minerva, who was part of an advanced race, Isu, who walked on the Earth a long ago. Her people used those pieces of Eden to rule over humanity, but there were some humans who revolted and fought for free will. However, a global catastrophe in the past erased most of her race. Further, the remaining of Isus co-operated alongside humanity to rebuilt civilization. She, through Ezio, notifies Desmond that another global catastrophe will soon take place and he needs to stop it from happening, and then she disappears, which leaves both Ezio and Desmond astonished. After Desmond wakes up from Animus, Lucy reveals that Earth’s magnetic field got weak, and the solar flares can cause global destruction. Also, Ezio and his friends escape from the hideout as Abstergo ambushes them.