With many people watching Squid Game on Netflix, questioning if it’s plagiarized, we will cover As The Gods will ending explained here at Otakukart firstly if you’re not familiar with “As The Gods Will” is a 2014 movie by Takashi Miike that recently gained a lot of popularity. Because the latest Korean series by Netflix, “Squid Game” bears striking similarities. If not blatant plagiarism in the eyes of critics with the Japanese movie by Miike. Secondly, As the Gods Will takes inspiration from a homonymous manga by Muneyuki Kaneshiro that Akeji Fujimura illustrated.

In today’s article, we shall explain the movie’s ending, as many of you out there seem confused. As with many movies ending articles, beware of spoilers. In consequence, watch the movie before reading. After the cautionary warning, let’s begin by saying that in As the Gods will. All stakes are high. It’s a terror film where the characters play games based on traditional Japanese games where the losers lose their lives. Shun Takahata, a student, spends a significant amount of time playing violent video games. He laments about how boring his life is one morning at school, but then he finds out he has to participate in a game of Daruma-san ga Koronda. With death as the penalty for failure

As the Gods will plot

Before we explain the ending, let’s begin by the start. As we stated earlier, Shun Takahata is a high schoolboy. He spends most of his day playing violent video games. One early morning, he has to play a traditional Japanese game called Daruma-san ga koronda. Who loses dies. When the Daruma doll turns its face towards the blackboard, a button on its back shows up. Shun and his school buddies must push the correct button combination before a timer runs out. As it turns out, everybody but Shun winds up dead.

After the carnage, Shun pairs with Ichika and goes to the gym to play with a giant Maneki Neko. Each contestant dresses up as a mouse and tries to swing a bell through a hoop in the neck of the giant Maneki Neko while they avoid a horrific death. They win with the help of Takeru, who strangely, after winning the game, goes berserk. He kills the survivors except for Shun and Ichika. After the killing rampage, the giant Maneki Neko spews out a gas that knocks them out.

Takeru, Shun, and Ichika wake up in a cube hanging above Tokyo. The students are blindfolded and must identify a Kokeshi wooden doll after a song ends. If they miss, a red laser will hit them and destroy them. If the Kokeshi lose, they erupt. In consequence, the Kokeshi release a key that unlocks a door and lets them go to the next level. Shun wins and rescues Shoko. Later they meet up with Ichika and Yukio. Saving them from a Kokeshi.

After meeting up with Kotaru and Eiji, they proceed to the next level. In that game, they have to use a group of keys to open a grinning head. The head rolls away and opens a chamber. Meanwhile, each player is shown on tv screens for the rest of the squad to see. Shirokuma, a white polar bear who appears to them inside a freezing chamber, is the next game. The students must all answer the white bear’s questions honestly, or they will be forced to kill the one they believe is lying. Shoko and Yukio are killed, and Shun swiftly realizes that the bear is a genuine liar and that its true color is black, enabling him to win the game and escape with the remaining four students. 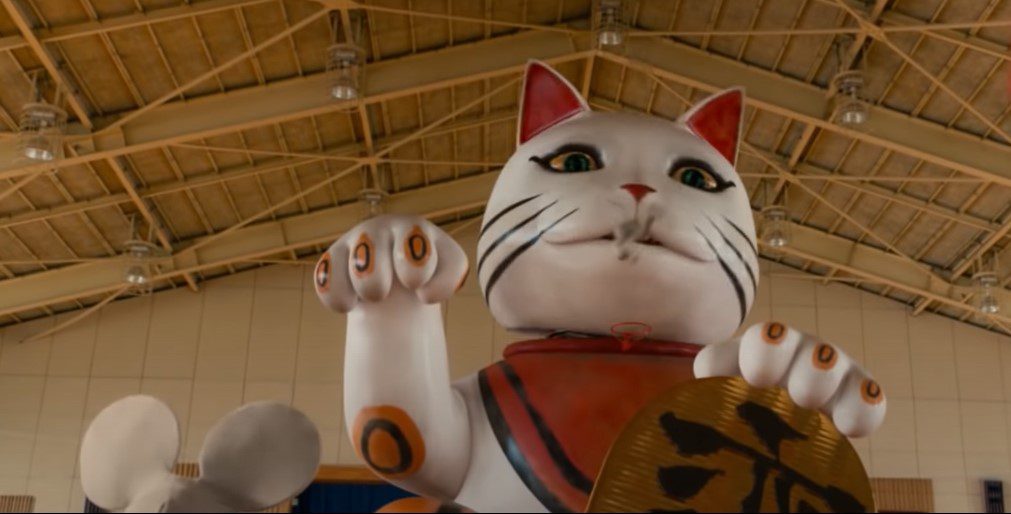 As the Gods Will ending explained

The last game, symbolized by a Matryoshka doll, is a kick-the-can game that must be completed before the sun goes down. The remaining five each choose a stick, and whoever receives the red stick becomes the “Devil.” Anyone whose face is seen and called by the “Devil” is caught and imprisoned. Kicking the can in the middle causes it to explode, killing all players around. Takeru got the red stick, and three students were caught swiftly. While Shun searched for armor to conceal his face. Shun is tied to Takeru’s armor and falls into the sea. He climbs back up, free of the armor, as Takeru tries to pull the armor up to avoid being pulled down. Shun is the first to kick the can, and he wins the game.

The Matryoshka doll means the explosion was a fake and they won’t be hurt if they lose. The last game was simply for fun, and they held a popsicle party to learn their fates. Shun and Takeru survive, but Ichika, Eiji, and Kotaro are vaporized by a Matryoshka doll. A hikikomori who had been observing them from his room leaves his house, maybe to learn the real name of “God.” Takeru beams while Shun sobs over his losses. “There is no God,” they say. This is incorrect since one of the Matryoshka dolls represents a vagrant who was also a spectator of the games and the “”od””behind them.