Han Suk finds out about Jae Hee kissing her ex-lover and threatens her with a gun. As they are caught in a struggle Jae Hee gets shot by mistake. 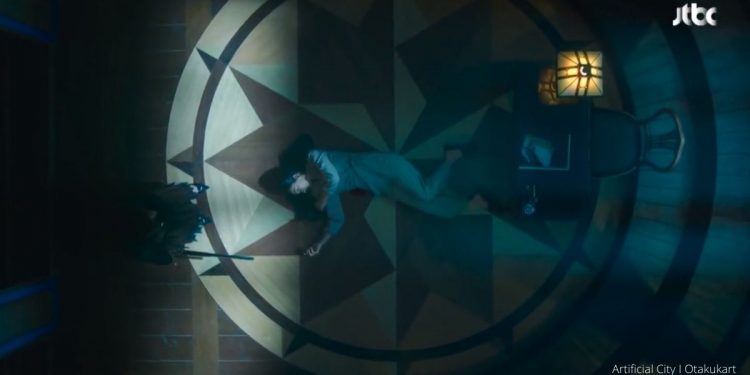 Jae Hee successfully takes care of the sex tape that surfaced a few days ago. According to her plan, she has to save both Cho Kang Hyun and her husband, Joon Hyuk. She decides to leak the video to the media and makes Ye Rin apologize to everyone. In ‘Artificial City’ episode 7, we will see Lee Seol’s obsession with Jae Hee’s family grow even more. Also, she is on Han Suk’s target as she is the one collecting evidence on her family.

Moreover, Jae Hee and her mother-in-law have always been in a cat and mouse relationship, and they have been waiting for the other one to fall. When Han Suk finds out that Jae Hee has kissed her ex-lover, she makes it a point to take advantage of this opportunity. Not only she refuses to give Jae Hee shares from the company, but she also points a gun at her. As they are caught in a struggle, Han Suk shoots Jae Hee by mistake.

Till now, we have seen that Jae Hee has acquired the key to the secret room from Han Suk. Even then, her husband’s reputation is in trouble as a new sex tape surfaces. When Jae Hee finds out about this tape, she thinks this is the reason why Mrs. Kwon committed suicide. But later, she finds out the video was sent by a woman named Noh Young Joo. She asks her ex-lover, who is also a prosecutor, to look into the matter. After a detailed investigation, Jae Hee finds out that Young Joo is already dead and she does not have any relatives.

Han Suk gives Jae Hee an ultimatum to solve this matter if she wants to keep the key to her secret collection. Instead of doing as asked, Jae Hee decides to leak Cho Kang Hyun’s sex tape with his sister-in-law. This takes off the attention of her husband. When Han Suk finds out that Jae Hee wants to snatch everything she has, she reacts very calmly. This fact does not make her furious, but when she finds out that Jae Hee is involved with another man, she threatens her with a gun.

The next day while preparing for the exhibition, Jae Hee and Jee Yeon have a clash of ideas, and because of the agreement, Han suk is not able to back Jee Yeon. This makes Jee Yeon very angry, but her mother-in-law cools her down. On the other hand, Jae Hee is still trying to help her husband, and to do so, she takes help from Dong Min. The next day when Jae Hee goes to the office, she finds out that Lee Seol has left her job because of how Mrs. Lee behaved with her.

Joo Yeon invites an important guest to the gallery and asks the employee to hand her the brochure of the minister. The information Joo Yeon finds in the brochure makes her very angry, and she slaps Jae Hee because of it. Later we find out the fight is because of the art critic Jae Hee finalized. As the fight escalates, Jae Hee makes Joo Yeon face reality and tells her to think before she acts in the future. Will this fight make Jae Hee and Joo Yeon mortal enemies?

‘Artificial City’ episode 7 will be released on 29th December 2021. Jae Hee goes to meet Dong-Min without a care of what anyone else might think. Also, there is an unidentified person who is helping clean all the evidence from Young Joo’s apartment. After the case on Young Joo has been closed, Jae Hee asks her mother-in-law to give her the shares for the Sunjin group that she promised. When asked what she will do with the shares, she reveals that she plans to donate them to gain control of Sinjin art gallery? Moreover, the unidentified person who is collecting all the evidence on Jae Hee’s husband is no one but Lee Seol.

Where To Watch ‘Artificial City’ Episode 7?

The South Korean drama ‘Artificial City’ is a television series broadcast by the jTBC channel. People living in South Korea can watch the upcoming episodes every Wednesday and Thursday on the given channel. As for international fans, the subscription-based website Rakuten Viki is available.