After keeping it a secret for many years, Jae Hee gets caught. Han Suk and Pil Seung finds out that Hyun Woo is not Joon Hyuk's son. 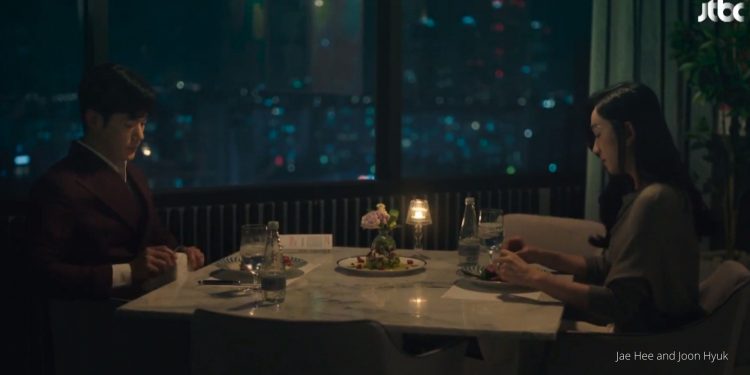 Jae Hee’s mother and father-in-law find out that Hyun Woo is not Joon Hyuk’s son. Pil Sung wants to kick out Jae Hee from the family for lying to them, but Hun Suk wants to make Jae Hee her successor. However, she promises her husband that if Jae Hee is unable to make Joon Hyuk the next president, she will not keep her in the family. ‘Artificial City’ episode 11 will determine Jae Hee’s future.

After suppressing one scandal, Jae Hee is faced with another scandal of her husband. This time it is a video of him with a prostitute. Despite being angry or arguing with her husband, Jae Hee decides to take care of this matter by herself. The man who sold the video to Mr. Choi works at the Sunjin family villa. He is abducted by Jae Hee, and she brings him to Mr. Cho.

Till now we have seen that Jae Hee gets everything that she has ever dreamed of from her mother-in-law. However, this is not enough for her and she wants more. In the journey of gaining more, she might lose her husband to Lee Seol. Jae Hee fakes her own pregnancy in the past. Later, she is on the verge of being caught as Joon Hyuk discovers Hyun Woo’s paternity test. Luckily, Han Suk exchanges the real paternity test for a fake one. This saves Jae Hee’s secret from being discovered.

Joon Hyuk’s father finds out that Hyun Woo is not Joon Hyuk’s son, but his wife keeps saying that it is noting important. She tells him not to cut off Jae Hee from the family. Jae Hee was having a hard time getting pregnant in the past, so she had to resort to other measures. Later, at night she meets Lee Seol, and they have some drinks together. Also, we find out that Lee Sol’s friend Yeon Joo is the one collecting evidence against the Sunjin group. Even though she is beaten up by them, she does not give up on uncovering their affairs. Her determination to get justice gets her killed in the process, and Lee Seol takes upon her task.

Not everyone in the company likes Jae Hee, but as she promises to make Joon Hyuk the next president, Han Suk promises her a better position. Mi Seon’s husband used to be Jae Hee’s superior, but now that she has been promoted, he has to work under her. Other than being disliked by her colleagues, Jae Hee’s old boss Mr. Choi knows about her secret and is in possession of her husband’s video. This gives him an upper hand to blackmail Jae Hee into spending some time with him.

Joo Yeon comes home late at night drunk, and her husband tries to help her to the room. She cries, laying on the couch, and tells Joon II not to touch her. Even her father-in-law is upset about Hyun Woo not being his grandson, and he drinks all day. He confronts Han Suk on her lie to Joon Hyuk and says that he will get rid of Jae Hee and her son if she doesn’t make Joon Hyuk the president.

The ‘Artificial City’ episode 11 will be released on 12th January 2021. In the upcoming episode, Jae Hee finds out that Lee Sol is living out of a locker in a building. She discovers this when she follows her after they meet for drinks. Considering her a friend, Jae Hee offers her a place to live. Later that day, a video of Joon Hyuk with a prostitute gets viral. After this, she calls Mr. Choi as he is the one who leaks the video. Even though she knows she should confront her husband about this, she decides to keep quiet. Joon Hyuk and Jae Hee enjoy a nice anniversary dinner, and she promises to make her husband the next president.

Where To Watch ‘Artificial City’ Episode 11?