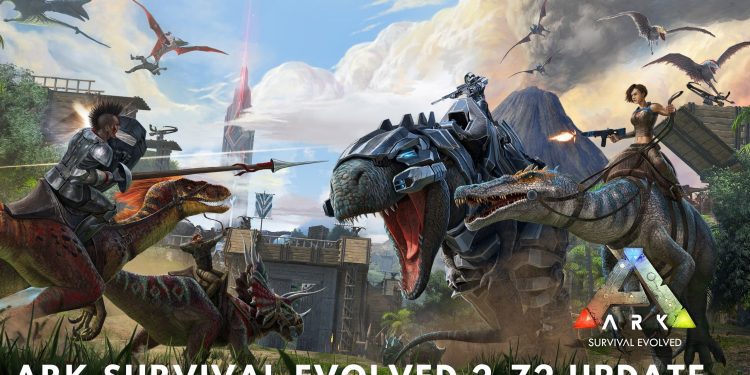 Ark Survival evolved 2.72 Update had a lot of issues and because of which the developers tried their best to improve the game. It is obvious that if a game, excellent or average, is having bugs and problems in it, people would gradually start leaving it. And, the developers and publishers of Ark Survival know it better so they came up with the improved game. Therefore, the new update in a new avatar is launched. Several bugs are fixed. So, you must be wondering, what improvements are there in Ark Survival Evolved 2.72 Update?

Talking more about the Ark Survival game, it is an excellent creation of Studio Wildcard and Snail. It was first released in the year 2017, and after that, it has been updated quite a few times as players certainly loved the game. Furthermore, It is a survival game with dinosaurs in it, and one of the best things about this game is that it is available both in single-player and multiplayer mode. So, call your friends, make a team and survive through the arena full of dinosaurs roaming around. But, firstly, read further to know what is new in Ark Survival Evolved 2.72 Update? and when it was released with the improvements?

What New is There in Ark Survival Evolved 2.72 Update?

As players were having difficulty while running the game, the makers tried to fix all the technical problems. According to them, now the game will not crash, and players will have smooth gameplay. Coming to the next bug that has been fixed is raising Magmasaur. This creature was not being raised with sulfur, but now players can easily raise Magnasaur with sulfur.

Lost Island is a free expansion of the game that was new and available for the players after the new update. Now, this Lost Island needed a lot of fixings, such as they fixed up the holes that were in the Lost Island. There were some over-spawning issues on the island. The makers paid attention to it. Moreover, there were issues with taming dinosaurs in the caves and issues related to large beaver dams that were not visible to some players. The game showed that you couldn’t tame this dinosaur in the cave or something similar, due to which the game was appearing tough to play for some players.

Next comes the issues with other things, like fixing problems with some dinosaurs. Also, players complained that the heavy fog while underwater would not be acceptable, so the makers reduced the fog. Loot crate spawning was not happening properly. Therefore, some players were unable to obtain any massive or devious artifacts, so the makers also fixed this issue.

Also Read: ARK Survival Evolved Genesis Part 2: When is it Coming Out?

Ark Survival Evolved 2.72 Update was released and has been available for all the players waiting so far on January 5, 2022. However, the previous update that is Ark Survival Evolved 2.71 update was released just around a month ago. The release date of the previous update was December 14, 2021. This December update launched a new island, that is Lost Island. Now, as the developers wanted to expand the play area of the players, they did a free expansion of the playable area. Because of being free, every Ark survival player is all set to conquer that area too.

Well, the way the expansion set out was exciting. It was at the same time annoying for the players as it brought a lot of issues. But as mentioned earlier, all the bugs are fixed now. And the players can enjoy the game, and if there are more problems left to be fixed, then they can complain to the publishers. Maybe in the next update, more of the bugs will be fixed. Furthermore, the game is available on Playstation 4, Xbox One, Linux, Windows, and others. The game is not only covering console gamers but also mobile gamers as this game is already available on Android and iOS.

Street Girls Fighter Winner: Who Won The Next Installment Of The ‘Street Fighter’ Series?