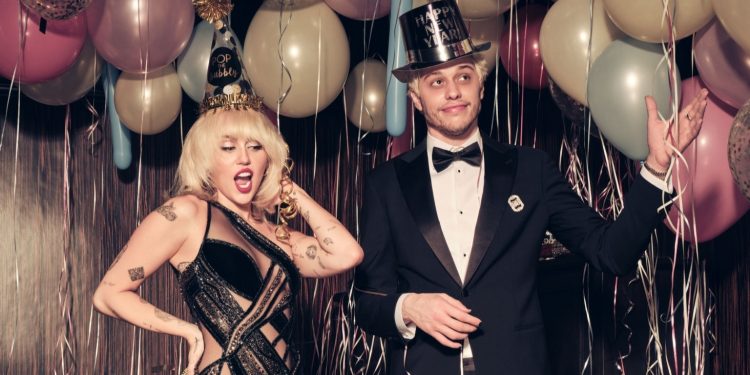 Miley Cyrus has entered the picture just weeks after it was announced that Pete Davidson and Kim Kardashian are casually dating. Pete was chosen to cohost Miley’s New Year’s Eve Party alongside her, and the two have been hanging out and publicizing the special together since then. But something strange happened after Miley posted a selfie of herself and Pete on Instagram. The caption was edited, and we don’t believe the caption was changed due to an error. Are Miley Cyrus And Pete Davidson Really Dating? Keep reading to uncover everything we know about Miley Cyrus and Pete Davidson’s current relationship, as well as the strange Instagram caption edit. But first, we’ll discover a little more about Miley Cyrus and Pete Davidson.

Miley Cyrus, a true rising star, has come a long way from being a Disney character to a young pop hit. With the Disney Channel show ‘Hannah Montana,’ she became a ‘teen idol.’ Cyrus is one of the wealthiest adolescent superstars of her time, ranking 35th on Forbes magazine’s ‘Celebrity 100′ list. By the age of seventeen, this adolescent sensation had amassed a fortune and was named 9th on Forbes’ list of the “Top 20 World’s Richest Female Singers Of All Time.” Pete Davidson, on the other hand, is an American comedian and actor. He is most known for his role as one of the primary cast members on ‘Saturday Night Live.’ In addition, he has appeared in a variety of other TV episodes and films. Hillary Clinton is a tremendous fan of the American actor, who praised her during her presidential campaign.

The rumor began on December 9, 2021, when Miley shared a photo of herself and Pete on Instagram with their arms wrapped around one other. Since it was first uploaded, that particular image received over 2.2 million likes, and it has been filled with comments asking how Kim would feel seeing her lover posing that near to Miley. But it was Miley’s caption, “POWERFUL DEBUT ENERGY,” that had everyone talking. Then there was Miley’s appearance on Jimmy Fallon’s The Tonight Show, where she charmed Pete with a cover of It Should Have Been, singing, “I want to watch a movie in freaking Staten Island…oh yeah, it should have been me.” That was the caption on Instagram.

In November 2021, Kim and SNL comic Pete revealed their relationship when they were photographed holding hands at the Palm Springs airport. To commemorate the 28th birthday of the King of Staten Island star, the pair spent their holiday at Kim’s mother Kris Jenner’s $12 million Palm Springs property. In a snapshot posted on Instagram by Flavor Flav, Kim, Pete, and Kris were shown looking with love at each other while wearing matching SKIMS pajamas. After meeting during Kim’s hosting debut on Saturday Night Live in October 2021, the E! actress and comedian were reported to be dating. While rehearsing an Aladdin-themed skit together, the two reportedly hit it off right away.

Who Is Kim Kardashian?

The well-known reality television star Kim Kardashian is a socialite, actress, businesswoman, and model from the United States. Robert and Kris, Kim’s Parents, welcomed her into the world on October 21, 1980, in Los Angeles, California. Kourtney is her older sister, Khloé is her younger sister, and Rob is her younger brother. Their mother is of Dutch, English, Irish, and Scottish descent, while her father is an Armenian American of the third generation.

Her mother married Caitlyn Jenner, the 1976 Summer Olympics decathlon winner, in 1991, after her parents split. She and her family made their first appearances on the E! reality show Keeping Up with the Kardashians. Its success soon led to the creation of spin-offs, including Kourtney and Kim Take New York and Kourtney and Khloé Take Miami. Kardashian’s personal life drew a lot of media attention right away.