Kpop stars, Irene and Suho are involved in dating rumors over the years. 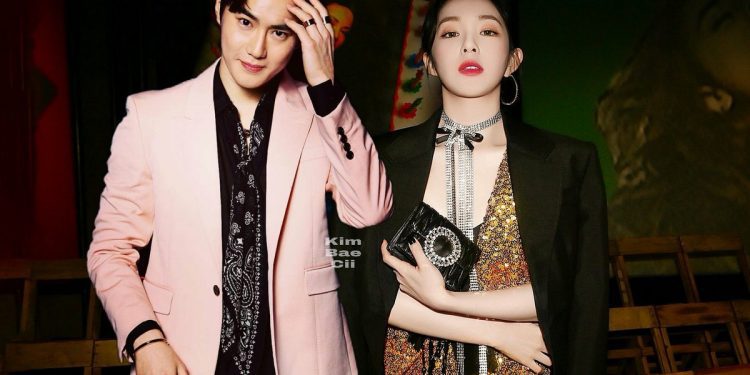 Red Velvet’s Irene and Exo’s Suho have often been shipped together over the years. But are Irene and Suho actually dating? Fans even went on to give their own unique name to the couple for shipping them together. However, no matter how much they look good together, all rumors and speculations could never be true. Such is also the case for Irene and Suho. The two idols could have a good relationship because they are both from the same entertainment label. So, they could get seen together sometimes without a doubt. But, it does not mean that Irene and Suho are dating. Or are they?

Irene and Suho are both said to be single currently and focusing on their works. Another thing to consider is that Exo’s Suho is also linked to Twice’s Sana and Blackpink’s Jisoo apart from Irene. Likewise, Irene is also linked with BTS’s V. She also got rumored to be dating Park Bo Geum before her debut. But, she very much denied any such rumors when asked during a radio show. Irene and Suho are not known to be in a relationship with anyone after making their debut, but both of them did speak about their ideal types when asked during interviews.

Are Irene and Suho Dating?

No, Irene and Suho are not dating. However, the pair got rumored to be dating over the years after tabloids spotted them together on several occasions. Fans also shipped them together with the name “SuRene,” and created special moments for only two of them. It is not a new thing that several people get linked together or shipped by fans in the K-Pop world. Furthermore, it is not only Irene and Suho that are linked together. In fact, both of them are also linked separately with several other idols and have their fair share of such rumors. Irene and Suho have also never affirmed that they are in a relationship despite all the speculations and shipping.

How Did Irene and Suho’s Dating Rumours Arise?

It is not known exactly when or how dating rumors between Irene and Suho arose. However, both the idols do have a lot of common grounds. They belong to different idol groups but are under the same entertainment management company, SM Entertainment. Both are the trademark of their entertainment company. Kim Jun Myeon is the real name of Suho, whereas Irene’s is Bae Joo Hyun. SM Entertainment found both of them three years apart as Suho came in 2006 and Irene in 2009.

Another two things that are common between them is that they are both the team leaders of their respective idol groups, Exo and Red Velvet, along with having the same birth year, 1991. Fans also noticed that their faces are almost similar to each other, having small faces with fair skin. Fans even went to ship on them together after noticing how they look good and suit each other. Slowly, they gave their name to the couple for shipping them together, although in reality, Irene and Suho have never dated each other.

Irene and Suho got first spotted together in 2016 when they were seen walking side by side together after returning from a pool’s water game in Hawaii. Both of them were also wearing the same type of clothes with black shorts and a white tee. But, this moment could not be considered to be a rumor as both of them went with their team members and other staff. Another instance is Irene and Suho appearing together at a press conference in Dubai’s SM Town in 2018. Suho even helped Irene at that time by asking the staff to bring clothes for Irene, which she needed for sitting down.

Suho and Irene also attended together a concert of Donghae and Eunhyuk in 2019. Apart from them, some other artists from SM Entertainment were also present at the concert. However, all the attention were on them as they were sitting beside each other and talking. Red Velvet’s Irene and Exo’s Suho are always seen as comfortable with each other despite all the rumors and speculations. It could be the fact that they are senior-junior from the same entertainment label.