Are Ida And Aoki Going To Have A Happy Ending In ‘Kieta Hatsukoi’ Episode 10?

Will Aoki and Ida start looking at things eye to eye? 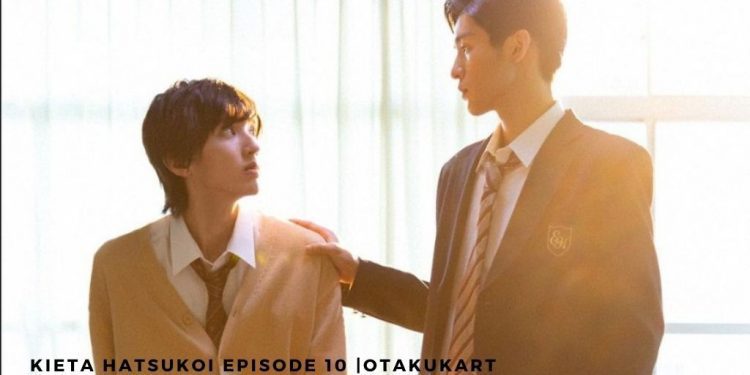 Kieta Hatsukoi Episode 10 is just a few days away! Unsupsringly, everyone in the audience is nervous about how the ending will turn out to be. Honestly, all of us know that a good show could be totally ruined by just an unsatisfying or underwhelming finale. It would be a shame if something like that happens to a show like Kieta Hatsukoi.

Furthermore, even though BL dramas are not very popular in Asian countries like Japan, the show has been doing really well. But why wouldn’t it though? It has one of the best storylines, sweetest characters, and a great cast lineup. There is not one person in the audience who didn’t fall in love with the adorable Aoki. Plus, it would be hard for Ida’s cool and calm demeanor to go unnoticed.

Let us not forget the best friends of Aoki and Ida. Everyone watching the drama couldn’t help but ask for friends like Akkun and Hashimoto. Also, many people could learn a lot from Ida’s close friend Toyoda. Other than that, the audience has been loving how the Japanese drama is able to break all stereotypes about bisexual people. Thye even portray a realistic relationship of high school overs through Aoki and Ida. Nevertheless, fans have been excited to see how the popular drama going to wrap up its first season. Don’t miss out on the grand finale and check out the release date, streaming details, and predictions for Kieta Hatsukoi Episode 10.

The release date of Kieta Hatsukoi Episode 10 is October 18, this Saturday. There is no doubt that fans have been impatiently waiting for the last episode of Kieta Hatuskoi or My Love Mixed-Up to air. Time sure flies by with Kieta Hatsukoi, can you believe that it has been almost two months ever since the Television series started airing? Fans can’t stop saying about how much they have for Aoki’s cuteness. With his insecurities and cute little mistakes, Aoki has easily captured the hearts of the audience.

Looking back, it is amazing how the story progressed from a misunderstanding to something else. It is truly awesome that the beginning of the story just started out with a misconception that started through an eraser. The audience really doesn’t know what magic spell Hashimoto had cast on her eraser!

Where To Watch Kieta Hatukoi Ep 10?

There is no doubt that a lot of Japanese viewers will be tuning in on TV Asahi to watch the great end of this beautiful story. The international audience will be surely going to be watching the episode as soon as it airs to see how this masterfully written drama will end. Kieta Hatsukoi Episode 10 will be available on Rakuten Viki with English subs and you don’t need a standard subscription to watch it; it’s absolutely free. Also, the 10th episode of Kieta Hatsukoi will release at 9:30 AM in the US, 2:30 PM in the UK, 8:00 PM in India, 8:30 PM in Australia, and 9:30 AM in Canada. Go and mark your calendars to watch the final episode of Kieta Hatsukoi!

What To Expect From The Ending Of The BL Drama?

After having the talk with Toyoda about how Ida mustn’t be dating Aoki only because he feels sorry for him, Ida might have decided to break up with Aoki. Ida has been dating Aoki while being unsure about his feelings towards him. Fans are sure that Aoki will be quite heartbroken when Ida tells him that he wants to break up. How will all of this turn out? Is the couple really going to break up? Fans had been worried that the drama’s ending will be very sad.

However, their minds were put to rest when they watched the trailer. Aoki and Ida were sitting on the rooftop alone and were having a peaceful time together. So there might be some hope for these two characters to start understanding each other. Cross your fingers for a happy ending for Kieta Hatsukoi and don’t miss out on the episode and see how the grande finale is going to be!