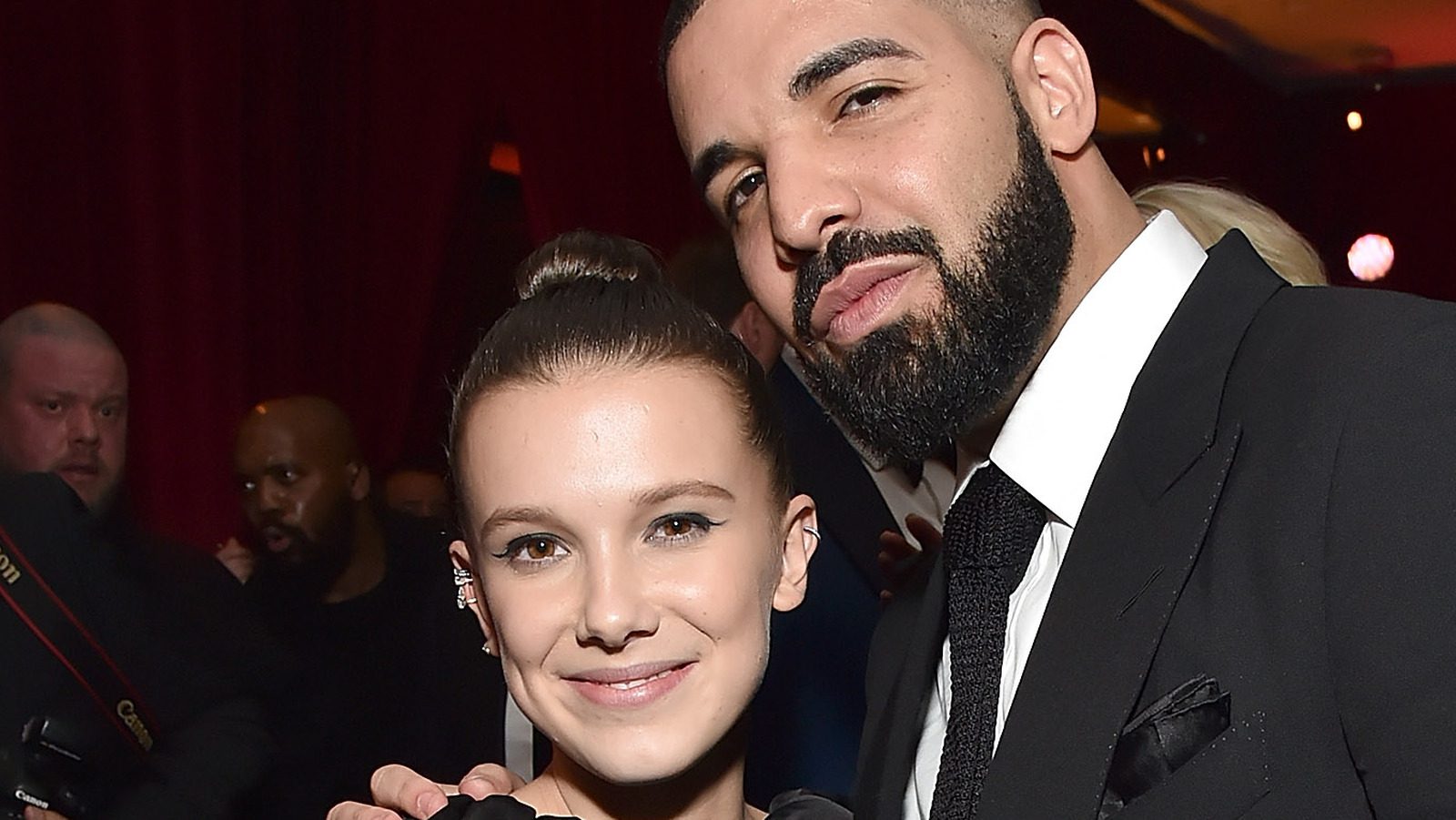 Millie Bobby Brown is an actress, model, and produced of British origin born on 19 February 2004. The actress began her career at a very early stage and having guest roles in several shows on TV. Brown gained her mainstream success and fame at the age of twelve when she starred in Stranger Things a first season of the science fiction horror drama on Netflix in which she played the role of Eleven. She has received several accolades over her career.  The actress has also appeared in several films like Enola Holmes and Godzilla vs. Kong up to now. Brown was also included in Time 100 list of the world’s most influential people in 2018 by Time. The actress was also given the position of UNICEF Goodwill Ambassador, which made her the youngest person selected for this position.

Aubrey Drake Graham is a singer, rapper, songwriter, actor, and entrepreneur from Canada and was born on October 24, 1986. The rapper gained fame when he starred in a TV show, Degrassi: The Next Generation, which ran from 2001–2007. Drake released his debut mixtape in 2006 named Room for Improvement, and this began her initiation into the career in music. The singer then released another mixtape in 2007 named Comeback Season and then further So Far Gone in the year 2009. The rapper eventually got signed by a major label Young Money Entertainment. The artist has won many accolades in the course of his career. Drake was among the world’s selling artists list and has a staggering selling of over 170 million records. The rapper is also ranked as a single artist with the highest-certified digital singles by RIAA in the USA.

What are details about Millie Bobby Brown Personal life and upcoming projects?

Millie is third among the four children her parents bear and was born in Marbella, Málaga, Andalusia, Spain. Her parents are of English heritage, named Kelly and Robert Brown. The actress was born with [10] partial hearing in one side of her ear, and the problem worsened, and unfortunately Brown lost all hearing in that particular ear over the coming years.  Her parents moved to the UK when she was at a small age of four, and then when she grew eight, the family shifted to Orlando.

There was an announcement in March 2019 stating that Brown will be starring in  The Thing About Jellyfish by Ali Benjamin which was a film adaptation of the prior, and she was cast as Suzy. Then further on 28 July 2020, there was an announcement regarding Brown casting in The Girls I’ve Been a suspense film. The actress was an executive producer and had a starring role in Damsel, a fantasy genre film for Netflix. Russo Brother also cast Millie in December 2020 as her casting was announced for their film The Electric State as a representation of Simon Stålenhag’s graphic novel for Universal Pictures. According to some reports, Brown was signed by Netflix for multiple projects, including Enola Holmes sequel named Enola Holmes 2.

Also Read: What Is Millie Bobby Brown’s Net Worth In 2021? Career & Earnings

What is Millie Bobby Brown and her friendship with Drake?

Drake and Millie met for the first time at the Emmy Awards in the year 2017. The duo became friends as Drake claimed that she saw Millie in the show Stranger Things and became a fan of her performance. In 2018 Brown, in an interview with Emmy Awards, said that they previously met in Australia and there are very good friends. Millie also stated that they text very often, and Drake is always a guidance figure for her. She added by stating that Drake had helped her facing boy problems. After the interview, several rumors were speculating the two datings, which led them both to face a lot of backlashes.

The actress went to her social media handle Instagram and clarified the rumors by writing, why are people making a friendship a headline for gossip? She also added by calling the people who are spreading rumors weird and added that she is lucky that she has people around her that support her and help her make her career go further. She added that no one makes her choices for her, and people should go back to facing and talking about real problems rather than her friendships.

Also Read: Who Is Drake Married To, The Rapper’s Tumultuous Dating Life?

Millie Bobby Brown was spotted recently in NEW York City streets with one of her rumored boyfriends named Jacob Hurley Bongiovi. The duo was spotted holding hands as they were strolling through the streets. She also shared the photo on her Instagram of her and Jacob with the caption “Strawberry Sundays”. Although this post has since been deleted by Brown herself from her social media handle.

Speaking about the career aspect of Millie, she was recently seen in a film that was released this year named Godzilla vs. Kong, which is a monster movie. The movies received a positive verdict from the audience and critics and have also broken several records during its running in a pandemic. It is also one of the highest-grossing films in the year 2021.

Also Read: Who Is Jake Bongiovi Dating, Is He With Millie Bobby Brown?