From a brand new animated show to Servant returning with a new season, here is everything coming to Apple TV+ in Month of January 2022. 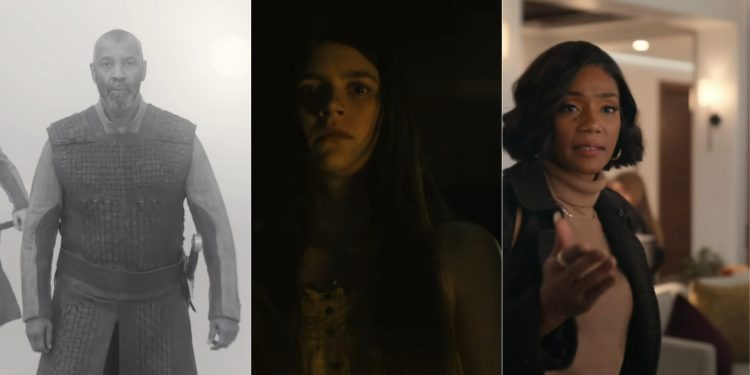 Stills from The Tragedy Of Macbeth, Servant Season 3 and The Afterparty

2021 closed on quite a heavy note for Apple TV+. Shows like The Shrink Next Door and the final season of Dickinson paved their way for the platform, which is quite popular for its quality—continuing to keep the same mark, as Apple TV+ heads into a new year. There are a number of such promising shows and movies debuting in the first month of the year 2022. At the same time, some of the promising ones are returning with a new season. Taking a look at the same, here we are breaking down the list of top TV shows and Movies coming to Apple TV+ in January 2022.

The month of January 2022 kicks off for the  TV shows and movies of Apple TV+ on a lighthearted note. A superhero in its own right is joining the library for the kids and family alike. A movie that made its presence felt at the 2021 New York Film Festival is making its way to Apple TV+ as well. Lastly, a disturbing and bizarre drama is returning with a new season. Still, the month ends on quite a funny murder mystery. With no further adieu, here is the list.

A brand new animated series is coming from Apple TV+. El Deafo is a three-part animated series telling the story of Cece. A child who lost hearing at a young age. At first, she felt different from the rest of the kids. That was until she channeled her inner hero and saw her deafness as a superpower. Thus becoming a superhero in her own right at school with everyone loving her.

El Deafo takes inspiration from the novel of the same name by Cece Bell. She also serves as the executive producer for the animated show and narrates the story. The show features voices from Lexi Finigan, Pamela Adlon, Jane Lynch, and Chuck Nice. Check out the official trailer for El Deafo below.

The Tragedy of Macbeth is a historical thriller coming from director Joel Coen. It takes inspiration from the play Macbeth by William Shakespeare. For the very first time, Joel Coen is going into a film solo. The film had its screening at the 2021 New York Film Festival on September 24, 2021, and a limited theatrical run.

The Tragedy of Macbeth follows the story of a Scottish lord who is encouraged by three witches to become the King of Scotland. The movie stars Denzel Washington, Frances McDormand, who also serves as the producer, Bertie Carvel, Alex Hassell, Corey Hawkins, Harry Melling, and Brendan Gleeson. Check out the official trailer of The Tragedy Of Macbeth below.

Fraggle Rock: Back to the Rock is coming back as full-fledged shows after a number of shorts. The original shows are already available on the platform. This brand new reboot is the result of a deal between Apple TV+ and The Jim Henson Company. The original show followed the story of short, furry creatures called the Fraggles living in magical caves. So keeping themselves away from Gorgs, we wonder what new musicals, advice, and stories we will be in for Fraggle Rock: Back to the Rock.

According to the official synopsis for Servant Season 3, the show teases Jericho’s return. Sean, on his side, has begun trusting Leanne and the powers she comes with. At the same time, Dorothy is threatened by it, and her concerns for her son grow. Amidst all of this drama, the family needs to find a way to keep themselves together.

The servant is one of those shows that are best described as bizarre and mysterious. So we can expect anything to go on moving into the show. Servant Season 3 comes from Tony Basgallop and M. Night Shymalan producing the series. It stars Lauren Ambrose, Toby Kebbell, Rupert Grint, and Nell Tiger Free.

The After-party is a new crime comedy-mystery taking place during a high school reunion after-party. The show sees characters solving the mystery on their own. Each episode focuses on one of the characters and their retelling of the event that could give everyone a clearer picture of the murder mystery.

Chris Miller and Phil Lord are popular for projects like The LEGO Movie and Spider-Man: Into the Spider-Verse are backing the show as Apple states. The show stars Tiffany Haddish, Sam Richardson, Zoë Chao,  Ben Schwartz, Ike Barinholtz, Ilana Glazer, Dave Franco, Jamie Demetriou, and John Early. Check out the official trailer for The After-party below.

What is Sommer Ray Famous For: Know All About The Social Media Star!