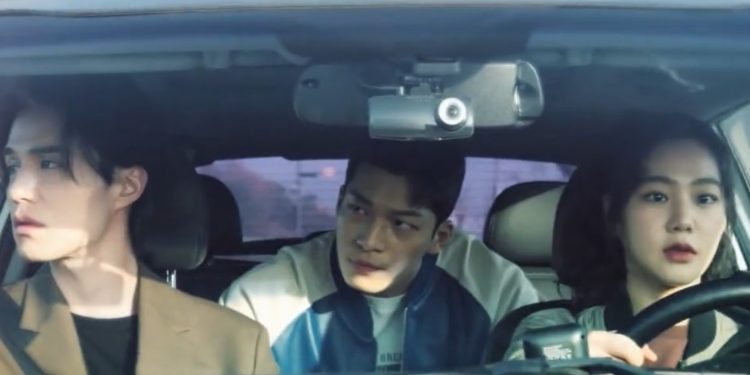 ‘Bad and Crazy’ Episode 9 is coming out this weekend. And with every day passing, Soo Yeol and K have been becoming more dependent on each other. And with Soo Yeol going down the lane of past memories, we might be getting a chance to know about K’s origin. The old romance is also rekindling as we saw Hee Gyeom and Soo Yeol sharing a kiss after she took care of his wounds. Together, they also managed to arrest the whole Narcotics unit involved with Boss Hong. While in the chase, Jae Seon got injured and landed in the hospital. But after tracking the drug and its sources down, Soo Yeol and his team were finally able to catch Andrei.

Pulling his connections, Kye Sik got Andrei under his custody. But seeing the package containing ‘The Eye’ getting delivered to his desk and meeting Boss Hong. He went on to get the seized drugs out of custody. But had no idea that Hee Gyeom was right behind him. Fulfilling her promise, she arrested Kye Sik with the help of Kyung Tae and Soo Yeol. On the other side, Soo Yeol almost resigned from the work and accepted all the sins he has committed till now. But looking at his mother’s situation, he decided to come back.

‘Bad and Crazy’ Recap: Soo Yeol Visits His Past Once Again!

Coming back to his job, Soo Yeol will have to see In Ju Hyuk, a therapist from now on. And Ju Hyuk and his own doctor want him to go down the memory lane but slowly. Sitting with his own doctor, Soo Yeol walked down memory lane and took a look around. Remembering that his real name is actually In Jae Hui, he saw a man beating a child. He remembered that his father died in a fire and that he ran away from the domestic abuse. As Soo Yeol ran far into the hallway, the doctor tried to call him back. Sitting down to rest, he saw K approaching him. Holding K’s hand, he got back into reality.

Also Read: ‘Tinted With You Episode 7’: What Will be Heon’s Response to Eunho?

Meeting K as he drove back to his house, Soo Yeol asked him about his childhood. But K doesn’t remember anything other than Hee Gyeom. Coming back to work the next day, a new case has arrived at the police station. A girl came in to report her dead father. Asking if she’s the one who killed her father, the girl passed out at the station with a packet of ‘The Eye’ next to her. As the narcotics team was under arrest, Soo Yeol and Hee Gyeom were the ones to take over the case. Vising the crime scene, they got to know the dead guy is Baek Jung Hak. Soo Yeol remembered him from the domestic abuse case.

‘Bad and Crazy’ episode 9 will release on January 14, 2022. At the dinner table, Soo Yeol asked his mother about how they met when his brother pitched in that he was the one who saved him. As Soo Yeol was all beaten up and abandoned, his brother brought him home. Going to an abandoned house the next day, Soo Yeol saw a beaten-up kid. Running after him, he found himself in the hallway of old memories again. As he was about the open the door in front of him, K told him not to open it and brought him back into reality. Now having an idea about his past, Soo Yeol is all set to go a bit deep in the memory lane. With Young Joo killing herself, the murder case is closed. But another ‘eye opening’ case has entered at the station with an almost similar story. Now with In Ju Hyuk also helping Soo Yeol in the case, things are getting complicated.

‘Bad and Crazy’ episode 9 will be available to watch on the streaming platform ‘iQIYI’.