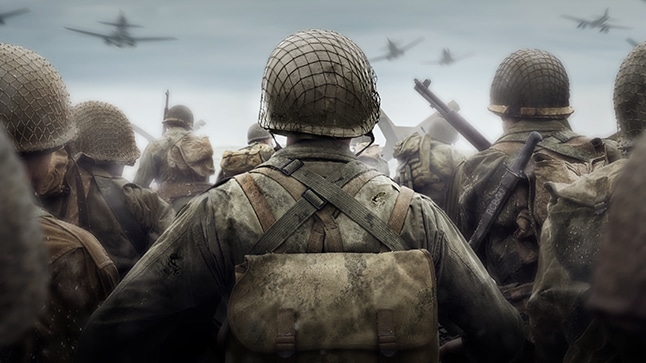 The developers are removing the auto-health regeneration system that saved so many COD players from respawning. Tons of players would have rather had this feature removed in previous games, though WWII will officially set the bar by removing this feature.

YOU HAVE TO WORRY ABOUT EVERY BULLET,” SCHOFIELD SAID. “YOU’RE NOT THE SUPERHERO. YOU CAN’T JUST STAND THERE TAKING SEVEN BULLETS, DUCKING, SHOOTING AGAIN. IT’S REFRESHING FOR US TO DEAL WITH RECRUITS WHO AREN’T TIER-ONE WARRIORS, TO SHOW THAT VULNERABILITY. THEY’RE NAIVE. IT’S BEEN A REALLY COOL CHALLENGE CREATING THIS DIFFERENT KIND OF GAMEPLAY.

As you can tell from the explanation of Sledgehammer Games animation director Christ Stone, they want the game to have an authentic feel to it. Allowing players to really feel like their in WWII. It seems like the developers are aiming towards perfect boots on ground game for their fanbase. It has also been confirmed that squadmates will play a more crucial role in the game. They also revealed the game won’t have any auto-ammo refill system.

He also suggested how squad members will have different roles:

They went on to explain how your squad members dying can affect you:

“Yeah – there are possibilities of important members of your squad dying…You can be separated from guys with key abilities that would change how you play – if you’re not with the ammo guy then you have less ability to replenish your ammo. The human loss of your squad is an important emotional impact,” says Condrey, “and there’ll be times that you’re separated and you may lose people that are emotionally important to you, so all of those things can happen, yeah.”

With all of the new changes, how do you think it will affect gameplay? Do you prefer it? Let us know in the comment section below!