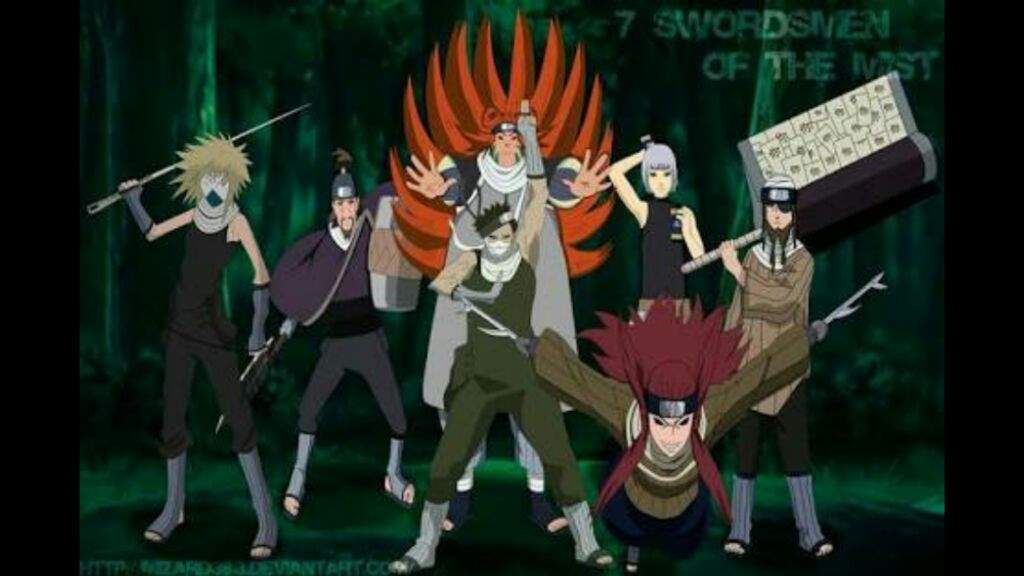 ​This is a group made up of seven strongest swordsmen shinobi in the Village of the Mist. The swords of the Seven Swordsmen are passed down from generation to generation. In this list, I will be telling you about the Seven Swords used by the Seven Ninja Swordsmen of the mist

A giant sword with a butcher-knife-like appearance. The sword has an ability to regenerate using the iron absorbed from the blood.

One of the most terrifying of the seven blades, it has the appearance of a giant knife covered in shark scales. It has the ability to absorb chakra.It is a living weapon!!.

The structure of the sword is like a long needle with a long thin wire that attached to it. It is a very Deadly weapon when used by the right person.

The sword consists of a giant axe and hammer, linked end-to-end by a thin leather rope, It is capable of crushing any kind of defence. It is also called a “Bluntsword”

A sword that has a scroll full of explosive tags incorporated into it. It is also called a “Blastsword”

It is a pair of slim swords. Both blades have an upwards curve one near the tip  and another one near the base of the blade on opposite sides.
It allows the user to transform and manipulate lightning freely, which allows them to perform high-level Lightning Release techniques with a minimal cost of chakra.

Hiramekarei is a wide, flat blade sword with fish like structure. It is capable of storing chakra. The stored chakra can be release on the command which increases the ability of swordsmen. The sword can be shaped into various weapons, such as a hammer or a long-sword. It can also create a large amount of light blue crystals that can inflict great damage and restrain the target’s movements. It can also split into two swords, each with a single handle.