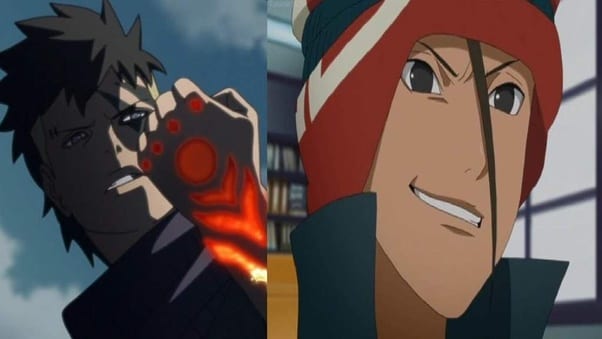 As we proceed more and more into the Boruto universe. We see the name ‘Kawaki’. So, who exactly is this ‘Kawaki? This is just a theory. So, don’t mistake this for the real thing. So without any further ado, Let’s get started.

Naruto, our beloved show, is a story of two friends, brothers, and rivals. As the story proceeds, we find out that those two are the reincarnations of the two sons of The Sage of Six Paths. Ashura, and Indra. Indra being Sasuke. And Naruto, being Ashura.

Indra was revealed to be the ancestor of the Uchiha Clan. Ashura was revealed to be the ancestor of the Sanju/Uzumaki Clan. At the end of Naruto, we see that both of them have realized their god-like powers. Together they were able to defeat Kaguya. Now that, indicates that Naruto and Sasuke are unstoppable when together.
But individually, they can be defeated. For example, the Sage of Six Paths was stronger than Naruto or Sasuke I either one of them was alone. That’s why they needed to work together to defeat Madara and Kaguya.

So, presumably, it is possible that if a person achieved Sage of Six Paths power, he/she would likely be able to defeat one of them, that is if they’re not able to work together. Hashirama and Madara were the previous incarnate of Ashura and Indra. Hashirama’s cause of death was unmentioned in Naruto.

But, it is mentioned by Tsunade that she uses the same healing technique that he used to use. It is also revealed that this cell regeneration technique has a downside – cells can only undergo mitosis a certain amount of time and as a result, this technique shortens one’s estimated life span.

So, that is the reason for the death of Hashirama, leaving behind Madara.

Now, I’m not saying that Naruto will die the same way, but it is possible. In any case, something will happen that will separate Naruto and Sasuke, allowing someone with Sage of Six Paths power to take them down individually.

Thus, leading to the post-apocalyptic Konoha. Where we see Kawaki tell Boruto, that he will send him to meet the seventh. Now, the question is that who will have the Sage of Six Paths power, and how will they acquire it? This is where Orochimaru comes in.

We already saw how Orochimaru artificially constructed Mitsuki by using his own DNA. So, my theory is that Kawaki is the ‘son’ of both Naruto and Sasuke.

Orochimaru has proven himself to be a nefarious person. Don’t need to explain that point further. It is not a far stretch to think that he could take the DNA of the two of the most powerful shinobi and create a super-soldier of sorts.

One can already see the similarity in Kawaki that he has both Naruto like blonde hair and Sasuke like black hair.

Being that Naruto and Sasuke are the reincarnations of Ashura and Indra, who are the sons of The Sage of Six Paths, the hybrid of the two would likely have the potential to reach Sage if Six Paths level as needed to surpass the two.

Boruto is also the son of a Hyuga, that is Hinata. Reincarnation of chakra has already been established, and if Kawaki has The Sage of Six Path’s power, his only logical match would be his brother, Boruto / Hamura.

We already see this being hinted at when we see Boruto possessing a Kakashi style Byakugan. This also leaves room for Boruto to develop the Tenseigan to counter Kawaki if he were to have a Rinnegan.

You see, the Hyuga Clan and Hamura are both virtually untouched subjects in Naruto. But, whatever might happen, we’re in for a feast. I’m sure it’s gonna be good.

Although I wish Naruto doesn’t die and get transported into some other dimension or what. But, I’m really really happy we’re gonna be having more of the universe.