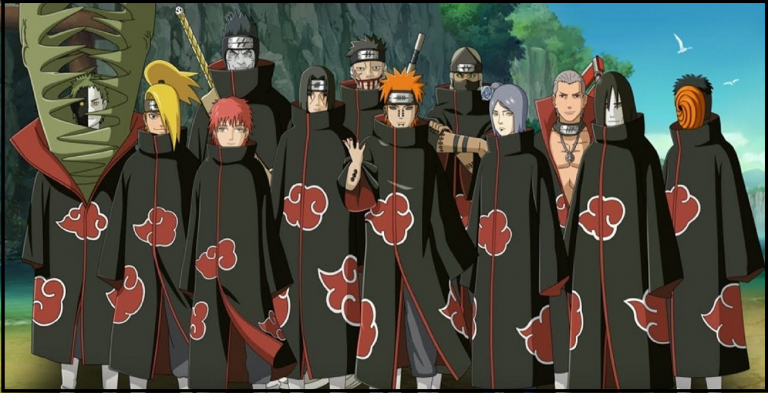 Masashi Kishimoto’s “Naruto” series is a Japanese comic with a significant fan base worldwide. This manga & animated series tells the story of Naruto Uzumaki. An attention-craving ninja that seeks validation from his peers and an opportunity to become the leader of his village.

The plot of Naruto is complex, and it has several characters, today, we focus on one of Naruto’s antagonists in the story arc: The Akatsuki. These are a criminal organization seeking to seize power in the world harnessing the power of the Nine-Tailed Beasts. The Akatsuki is a group of ten members, and in this post, we present to you our list of the most influential Akatsuki members in Naruto.

Juzo is one character only seen in the anime version of this series. Hailing from the Hidden Village in The Mist, he harbors a deep resentment for his hometown. A skilled fighter, he is one of the Seven Ninja Swordsmen Of The Mist. His ability with the sword puts him in high esteem by his peers. If Juzo hadn’t yielded to the temptations of the crooked path, he would have been made leader of his village, but he joined the Akatsuki.

An odd character for Naruto standards, Deidara is a character with mouths in the front of his hands. He’s skilled in covert ops & stealth tactics, Deidara uses clay as explosives and has even faced Gaara & Sasuke.

Konan is one of the few Akatsuki that managed to survive the first succession of the criminal group. Konan ranks way up high in the Akatsuki organization. She is Pain’s right-hand council. Konan can transform her energy into paper forms.

Zetsu is a master of deceit and stealth, and he can track his opponents and hunting them down, a skill that the Akatsuki keep in high regard as they can stay in check every move of their foes. Zetsu’s mayfly technique allows him to camouflage while striding at fast speeds.

Sasori is a ninja capable of summoning zombie puppets; he is nearly immortal. His powers get him to also turn into a zombie, rendering him invulnerability to powerful attacks. Sasori also relies on secrecy & stealthiness to subdue his foes.

Kakuzu is a greedy character that joined the Akatsuki with hopes of lining his pockets. A brutal style, known to slain entire towns. Kakuzu achieved immortality after striking a deal with a demon. He let the evil spirits take over his body, giving him great chakra powers that help him in battle.

Orochimaru wants to be immortal & powerful, his techniques in battle make him a challenging foe, the powerful Itachi tried to seal him away, and he still keeps popping up. Orochimaru can use his Edo Tensei technique to summon three powerful enemies to face his adversaries. Orochimaru’s powers are so high, and he created a parallel universe inside his mind that allows him to infiltrate other people’s bodies and control them.

Obito founded the third order of the Akatsuki after being a disciple of Minato, a character that died because of Obito’s actions. Uchiha’s power surpasses those of the Kotoamatsukami. He can keep Yagura in check without raising any suspicions from Ao. Obito received the Rinnegan, and he mastered it, managing to control the famous Six Paths.

Pain is one of the most dreaded members of the Akatsuki criminal organization. He has the power of the Rinnegan, just like Obito. He destroys villages and cities with an orb of energy and only got stopped by Naruto using his Sage abilities and the Nine-Tailed Chakra.

The number one spot in our list of the most influential Akatsuki members goes to
Itachi. Itachi is the best ninjutsu & ninjutsu master in the Naruto universe. He is brother to Sasuke Uchiha and is the smartest of the Akatsuki. Itachi masters the most advanced techniques of the Sharingan, ranging from Tsukuyomi illusions, the flames of Amaterasu, and battle avatar Susanoo. Powers that can control matter, space, time, he can clone himself, he can seal people with fantastic skills, and he can control fate.
Itachi’s powers come with a caveat. The more he uses his skills, the more likely he is to eventually go blind.