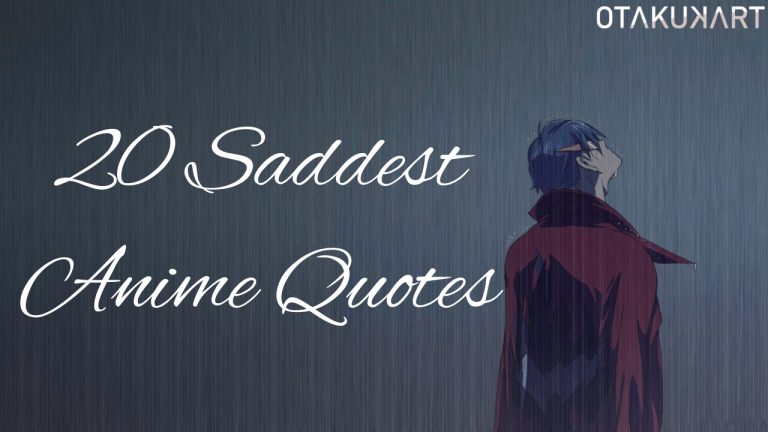 Sadness is a normal emotion, and we’ve all felt sad at any given time. In this piece, we present sad anime quotes, and we provide you with links and other content.

Back in the twentieth century, a psychologist by the name of Paul Ekman identified a group of six basic emotions that humans feel as they interact with one another and their surroundings. Anime is a cultural, artistic manifestation, and like all forms of art, it portrays all groups of feelings that a person can experience: Anger, disgust, happiness, surprise, fear & sadness.

Anime is full of sad quotes, and we present a selection of sad anime quotes that will make anime fans reminisce about the many plots and stories out there and up for grabs.

The scariest thing about people is getting used to it. When you kill someone and realize you won’t be punished

Rentaro Satomi ponders remorse after the murder in the Black Bullet anime, you can stream Black Bullet on Hulu & Crunchyroll.

If you let yourself get depressed, you’d be making light of the people who trust and follow you.

The mysterious young boy in the Japanese manga Rei Ogami is one of the main characters of Code: Breaker, which currently runs in Weekly Shonen Magazine, published by Kodansha.

Devil Survivor 2: The Animation Alcor The Anguished One Sad Quotes

If you don’t like how things turned out, then try to change it. And then if it still doesn’t work out, that’s when you can be depressed.

Nanana Ryugajo’s motivational quote about failure tells a lot about the sad part of any project: Dealing with setbacks along the way. Nanana’s Buried Treasure is a light novel that got adapted into Anime by A-1 pictures in 2014 with eleven episodes. The series tells the story of a ghost girl and a boy that lives in a haunted apartment. You can stream Ryuugajou Nanana no Maizoukin on Crunchyroll.

A defeated Spike Spiegel utters his last words as he faces his end after defeat & betrayal in this 1997 space western created by Hajime Yatate which you can stream on Hulu.

I hate myself. I was selfish, and I never thought about anyone else’s feelings. Since then, my classmates have all looked down on me. I’ve lived for 17 years, and I haven’t lived one of them as a good person

A Silent Voice is a movie based upon a Manga that ran on Weekly Shonen Magazine that tells the story about a female juvenile delinquent that bullies a deaf classmate during her high school years. You can watch the movie on Netflix.

Stress makes you bald, but it’s stressful to avoid stress, so you end up stressed out anyway. In the end, there’s nothing you can do

In the adventure comedy sci-fi manga & TV series by Hideaki Sorachi that tells the story of Edo period samurai Gintoki Sataka in a world taken over by interdimensional aliens that you can watch on Hulu & Amazon Prime Video.

You may find it hard to adjust to at the beginning…Time is very depressing…Happiness and sadness fade away with time.

We see this quote in the 1996 –and on-going– TMS Entertainment anime television series adaptation of the Gosho Aoyama anime series “Case Closed”, also known as Detective Conan. You can stream Detective Conan on Netflix & this is the official series website.

“Kakarot, please. Destroy Frieza. He made me what I am. Don’t let him do it to anyone else. Whatever it takes. Stop him. Please.”

A crying, defeated Vegeta begs Goku –another fighter that defeated him– to save the world and destroy Frieza in this anime classic by Takao Koyama that you can stream in Amazon Prime Video.

Did I make the Japanese people happy? Did I make it work?

The dying words of a Britannian princess in Code Geass, a fantasy anime series in which Lelouch Lamperouge is the central protagonist with mind-control ability, that you can stream on Netflix.

Akito: Who is going to be sad? Everyone is alive thanks to me. They all hope that I will be gone quickly. I was born into this world in order to die. That’s what was decided.
Tohru: Why? Who decided such a thing? Akito-san, you are indeed alive right now, aren’t you?
Akito: Alive? You call this being alive? It has been decided—and they never even asked me!

Fruits Baskets is a teenage girl anime series by Natsuki Takaya in which the Sohma family lives with a curse that inflicts physical pain to the other members of the family. In a graphic scene, Akito slams the head of a girl to the ground as he bellows to her.
This series is available on iTunes.

War is not heroic. War is not exhilarating. War is full of despair. It’s dark. It’s dreadful. It’s a thing of sorrow and gloom.

In this shonen series by Noriyuki Abe, Izuru Kira reminds the audience of the stark and grim realities of warfare. You can stream Bleach in Hulu, Netflix, iTunes or Amazon Prime Video

Even if I’m worthless, and carry demon blood… thank you, for loving me!

When Portgas D. Ace makes the ultimate sacrifice to save his brother from a battle, he thanks his friends before dying. You can watch One Piece, an adventure fantasy anime by Eiichiro Oda in Amazon Prime Video.

Death is not kind. Death is Dark and black and as far as you can see, you’re all alone.

This gloomy quote by eyepatched Mei Misaki, one of the main characters in this adaptation of Yukito Ayatsuji’s serial novels that tell a horror story of a cursed death. You can watch this series on Crunchyroll.

The thing I wished for destroyed my whole family. I brought all this suffering down on my family because I made a wish for my dad without knowing what he really wanted.

Kyoko Sakura expresses this heartfelt quote when she wrecks her family through the whims of a wish. You can stream this dark fantasy psychological thriller anime by Yukihiro Miyamoto & Akiyuki Shinbo on Netflix

You are extremely afraid of any kind of initial contact aren’t you? Are you that afraid of other people? I know that by keeping others at a distance you avoid betrayal of your trust, for while you may not be hurt that way, you mustn’t forget that you must endure the loneliness. Man cannot erase this sadness, because all men are fundamentally alone.

The deceitful Kaworu manipulates and shows Shinji, an emotionally wracked teenager in the epic story series by Hideaki Anno. You can stream Neon Genesis Evangelion on Netflix.

There’s nothing special about being born. Not a thing. Most of the universe is just death, nothing more. In this universe of ours, the birth of a new life on some corner of our planet is nothing but a tiny, insignificant flash. Death is a normal thing. So why live?” Johan Liebert.

Monster is a fantastic crime mystery thriller set in Eastern Europe by Naoki Urasawa that ran in the early 2000s and that you can watch on Amazon Prime Video.

Tomohiko Ito’s anime tv series of Kei Sanbe’s Erased manga series depicts a mysterious sci-fi thriller. Kayo Hinazuky is one of the troubled classmates of the main protagonist Saturu Fujinuma as he figures a way to use the new revival superpowers that allow him to travel back in time. You can watch the live-action movie on Netflix.

Cry when you’re sad. Laugh when you’re happy. Get angry when you don’t like something. It depends on someone when you’re depressed. Care for yourself before you care for others. Don’t hate anyone. Be proud of yourself. Stay loyal when you fall in love.

Otonashi Maria is the female character of Utsuro no Hako to Zero no Maria. She is an antisocial girl with a knack for “breaking” Kazuki, another character in this action mystery thriller by Eiji Mikage, published by ASCII Media Works. You can buy this series on Amazon on paperback or kindle.

We wrap up our collection of the sad quotes of anime reminding our readers. Do check back our website for more anime and manga resources because we update this website and our lists regularly.